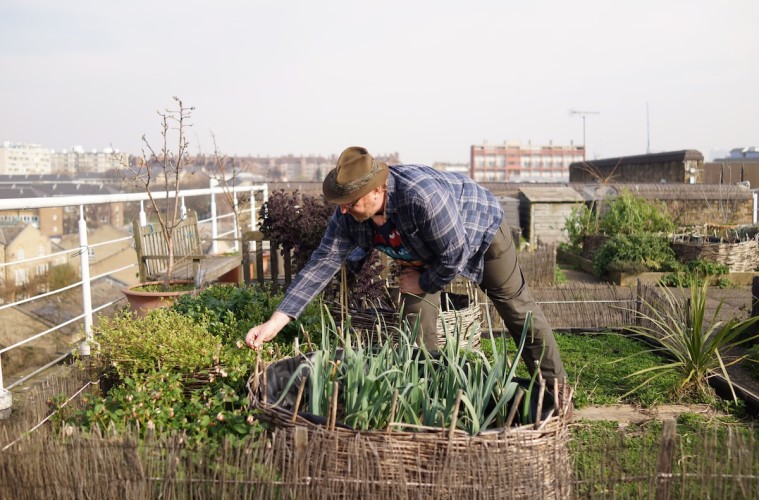 We visit the roof top garden at the Kings Cross branch of international branding agency Wolff Olins and interview Paul Richens, the proud creator and head gardener at the project…

Read Interview
What inspired you to become an Urban Gardner?

I’ve been a gardener all my life, a thing my family did as an everyday normal part of life.  I’m an urban gardener I suppose because I live in Greater London but also because I’m determined, as a proud Londoner, that growing good organic food is possible in London and not just seen as only possible in a country cottage.

Can you tell us a little bit about the Wolff Olins roof top garden, how it came about and what you grow?

Wolff Olin’s as a company ‘bought in’ to the whole concept of sustainability and started to change their site management practices, such as lights that only turn on when you enter a room, sending all their kitchen waste away to be recycled. Part of that thinking was a roof garden to grow organic vegetables for their kitchen, which is where I came in along with Global Generation (a local charity working with local business to create a stronger local community). The roof garden was built with a team of Wolff Olins staff and local school pupils who build the trays and wove the growing baskets.

I’d wanted to be able to practice some sort of crop rotation so I was lucky that we were able to construct four ‘base trays which each hold three growing baskets, in total we have 3.5 tonnes of loam in the baskets – all carried up by hand by one of the King’s Cross development contractors.

So we now have three mini gardens for a basic crop rotation system (legumes, brassicas and roots) with the fourth for semi-permanent crops such as herbs and Currants.

I must say that as interesting/difficult as it has been to grow on such an exposed roof I’ve also grown the best cabbages of my life! This is mainly due to the full light that the roof enjoys rather than the semi-shade that most of us London gardeners live with.

How have attitudes to gardening, food growing and wildlife biodiversity in London changed over the years?

I think it is changing and for the better – but I only see a small self-selecting sample – people who want to grow and understand the natural cycle. Interestingly it’s the children of the 80ties who’s parents/grandparents might have know how to grow vegetables but because they were all so affluent then they didn’t bother to pass on their skills (food was so available why bother) but these 80ties children are now having children of their own and want to show how to grow with them.

At one time most people could name some/most wildflowers/birds etc but basic natural history knowledge just doesn’t exist at the moment – people know more about the Serengeti (as seen on the TV) but nothing about UK Spring flowers. I don’t think it bodes well as how can they engage in any arguments/planning about wildlife biodiversity if they don’t know the subject.

How do the Wolff Olin’s staff use the space - do they like to get involved, planting, harvesting etc?

When we set up the roof garden we encouraged everyone to adopt a plant. I only work there one day a week so I don’t know for sure but I see signs of use. Stuart Robertson the building manager is my main supporter, watering and weeding when I’m not there but more by inclination rather than as a job role. If I’m planting stock or harvesting I always advertise for help and I’ve got some quite keen people who pop up to get their hands dirty.

You keep bees on the roof top too - does that help with pollination? You also have a roof top wormery - how important is it to create a microcosm and encouraging natural habitats to the success of a garden?

You can grow in a pot on a windowsill, without any of the support structures and still be a successful urban gardener. London Bees are safer from the destructive agri-farming practices and spraying that surround us but because the explosion in the number of Londoners running Bee hives we need more fodder for Bees. I grow many plants for their flowers alone – actually no hardship, they make the garden so beautiful.

You mentioned you give gardening advice in the lift - do you think having the space has inspired them to have their own urban gardens?

This is one of my little jokes – a variation on the French saying ‘I’esprit de I’escalier’.  Most offices are pretty high pressure places and people have little or no time to come and find me up on the roof so if they have any gardening problems I often I get questioned in passing.

From the sorts of things I get asked I think many people are now gardening at home. One of the best comments I ever got was somebody who said that if I could grow in an old rubbish skip then they could certainly grow something in their small back garden – result!

How much of the produce is used in the Staff Restaurant and do you have a close relationship with the Chef Sam?

I always say I run a garden not a farm. Sam Youssef, Wolff Olins’ excellent chef, always kindly flags up what we’ve supplied from the roof garden in the daily menu.  I honestly don’t think most people realize how much food a canteen actually has to produce on a daily basis – believe me, it’s a lot!

You spend time teaching adults and children through Capital Growth, your job at the Skip Gardens Kings Cross and other programs. Do you think the lessons of local food and gardening stick with them?

One has always to travel hopefully. Every teacher knows they never know what sticks with their students, certainly my history master never had an inkling of the passion he engender in me for history so why should I be any different – I get so much joy from what I do anyway it really doesn’t matter.

What are some of the challenges of gardening in the city?

All the usual gardening problems with a few added urban issues like container growing. But I suppose space is the main one. Unless you’re lucky living in a city can be quite transitory, I’ve left quite a few gardens during my life here in London. These days if I have to leave a garden I read aloud the poem by William Barnes ‘On leaving a garden’ to lessen the pain.  Seriously water will be the next huge issue for urban gardeners – start rainwater harvesting now!

Do you have any tips for aspiring urban Gardeners?