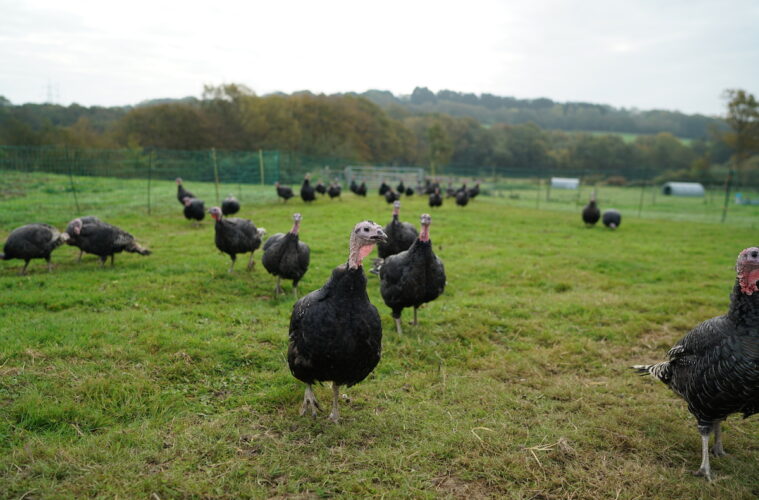 We recently met up with turkey Farmer Will Sheffield to learn more about his turkey rearing enterprise, talk about the impact of Covid-19 and his plans for the future.

Will grew up on the family farm in Vines Cross, where his father started producing turkeys year round, and for the seasonal market in the 1950’s, and where his eldest brother now produces turkeys too.

After spending the first 10 years of his working life on the family farm, Will moved into construction for about 15 years and then in 2005 an opportunity arose to help run Clayton Farm, a 160 acre Organic farm in Mayfield – producing organic beef, pork, eggs, chickens and turkeys.

Then in 2011 Will started his own venture – Sheffield Farms, buying breeding cattle, pigs and equipment and continued to run the enterprise from Clayton Farm. This year he decided to move his turkey rearing enterprise to his own farm – Meadow Brook – in Chiddingly, giving up up rearing cattle and pigs.

Now in his tenth year of running his own business – he has grown his turkey rearing enterprise from 500 to 1,650. The majority of his customers are local butchers and farm shops – accounting for about 90% of his business. The remaining 10% are sold direct from the farm gate to customers. 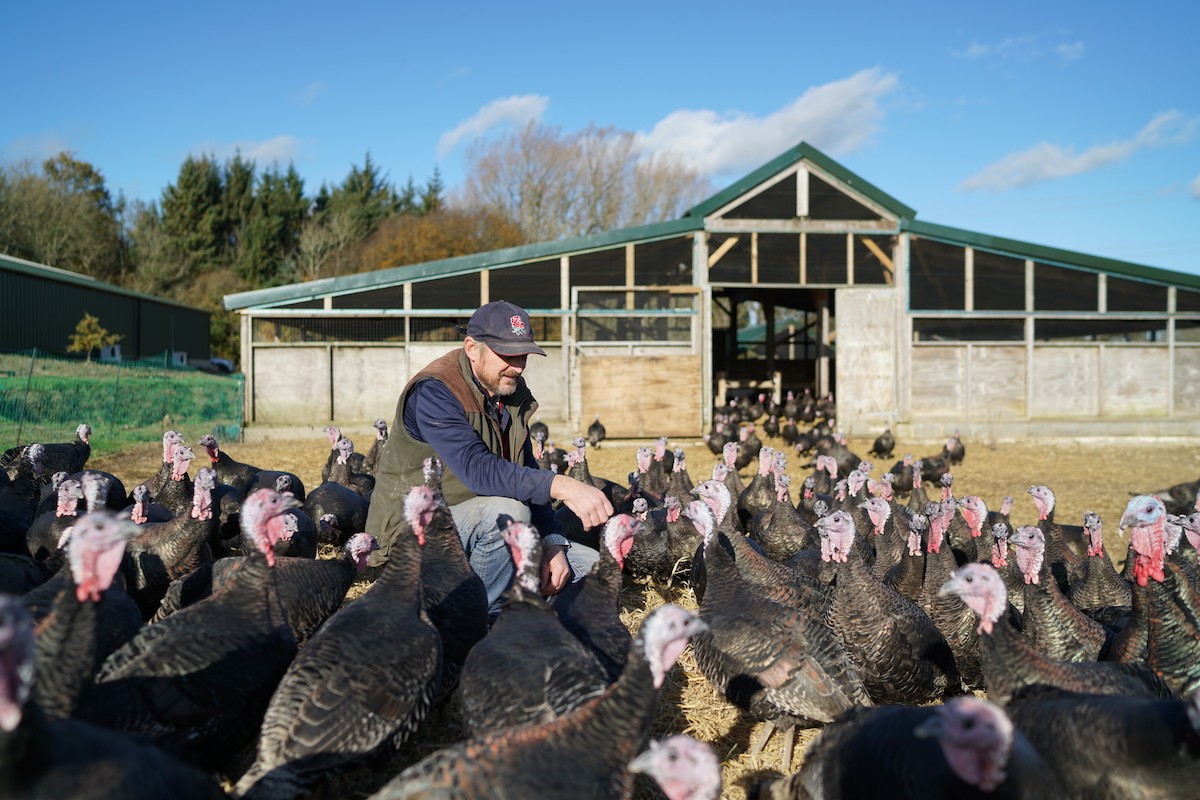 Will says: “These days you cannot produce stuff in the hope you are going to sell it – as soon as you start selling wholesale you’ll lose money.”

Thankfully Will has built up a loyal base of customers. Nevertheless he still says it’s a bit of a punt estimating how many turkey poults to order as there’s no guarantee that customers will re-order from him.

“The hatcheries will start contacting me in February wanting my poult order – which determines how many turkeys I will have for Christmas. Touch wood most of my customers are very loyal and some have been expanding recently too.”

On Covid, I ask him whether lockdown or the rule of six is likely to impact turkey sales?

“There’s a lot of talk about the rule of six (like in this BBC report), personally I take the view that if Xmas gatherings are smaller than normal (and it looks like there will be restrictions of one kind or another) that basically means more turkeys will be required and let’s face it, nothing beats the spectacle of a perfectly roasted whole bird as the centrepiece of the Xmas feast!

To make sure we are covering all the bases however we are increasing our range of Rolled Turkey Breasts stuffed with our own homemade sausage meat and wrapped in streaky bacon, so that we have a complete range from 1.5kg joint to a 10+kg whole bird in  0.5kg increments, there’s something for everyone!

So I think demand for turkeys will be high and while we may have to work with our butchers to perhaps make the medium/large birds more attractive price wise, I think overall the outlook is positive.
This years’ tag line is ‘Big Birds mean Better Value!!’ Anyway, who doesn’t like a spicy turkey curry on Boxing Day?!”

This year Will has reared around 1500 free range bronze and 150 barn reared whites.

He sources from two hatcheries – Holly Berry hatcheries in Lincoln and Kelly’s in Essex and says: “I tend to go for a more traditional shaped bird that does well under our production system.”

They arrive in two batches, this year it was the last week of May and middle of June, going under heat – a gas brooder for four weeks after which they are hardened off and are given more and more space as and when needed. 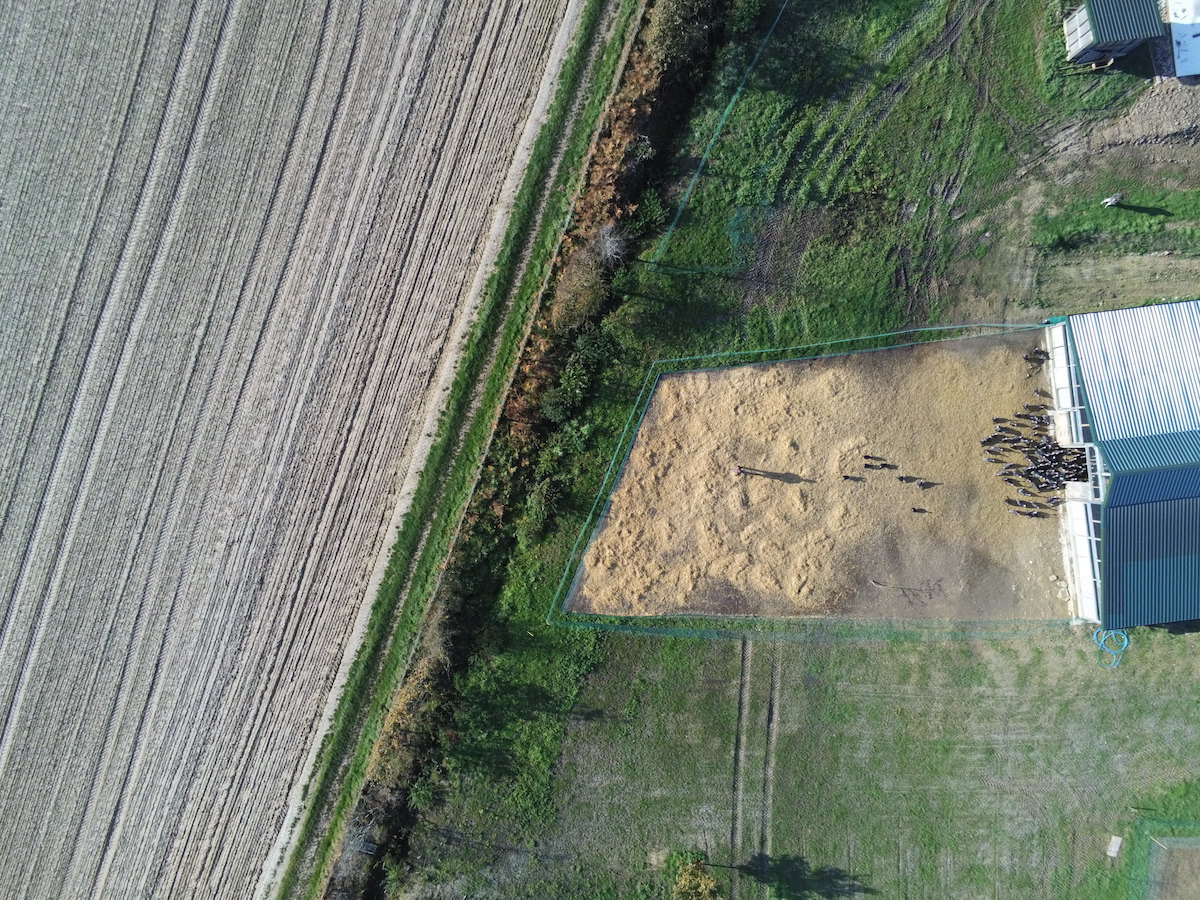 Aerial view of the Turkeys

On poult mortality Will explains: “You get 2% free for losses. It obviously varies – I had one batch that lost another 2% and another batch which lost 10%”

On average he tries to keep losses to around 5% for brooding and says “realistically by the time you come to slaughter them they average around 6-7% mortality”.

Cost per poult is around £5. Feed costs range quite a bit – a conventional starter is around £450 per tonne and the finisher ration is around £280 per tonne.

“If you cost everything accurately and the NFU have costings on their website – it works out around £35 per bird – that’s to get it from poult to oven ready – that’s their official figure”.

All the birds are checked, fed and bedded up first thing in the day. “They are very inquisitive birds – you’ve got to keep them occupied and fresh straw every day is something that keeps them interested.”

The free range and organic birds are then let out once their double fenced pen has been inspected and is fully secure – they will be left for the rest of the day until they are checked again at the end of the day and then rounded up before nightfall.

Turkey farming is not without it’s challenges: “The biggest challenge every year is the brooding stage – it’s when they are most susceptible to disease and not getting going.”

The other main threat is predators. “Initially the turkeys will be in a pen with Heras fencing security panels with a lid to stop birds coming down. They then need more space so you can’t put a lid on the pen”. It’s at this stage that they’ve had rooks, crows, magpies and even mink kill their turkeys, though Will uses brightly coloured string and a shotgun to deter them.

The majority of their turkeys are sold via local butchers and farm shops, he offers a good discount and order numbers have steadily increased over the years. On the farm gate, direct sales to private customers can reach £80 a bird which includes all the trimmings with weights ranging from 4kg up to 9kg – with the larger birds being the most profitable. 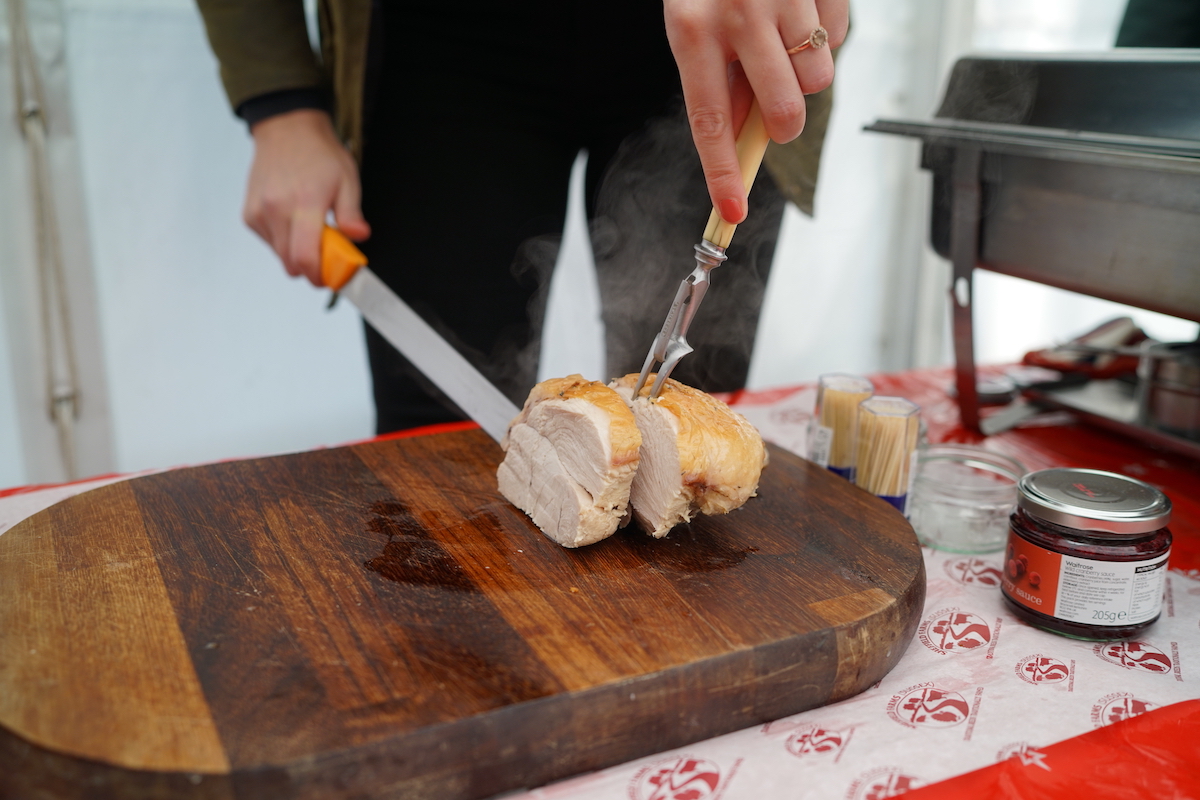 Will loves the seasonality of turkeys and says: “It’s the one time of the year that people want a local product and are prepared to pay for it. In the two weeks running up to Christmas – the supermarkets envy the butchers as a high percentage of shoppers go to their local butcher and buy locally reared meats, Christmas turkey, roast beef, gammon etc. Come the 1st of January those shoppers migrate back to the supermarket and ‘normality’ returns.”

The majority of the turkeys will be slaughtered around the 6th December – a process which takes three to four days. They then hang them for 10 days after which they are gutted and packaged up ready for the oven.

Will says: “Hanging the birds for 10 days adds flavour and tenderises the meat”. He adds a recipe leaflet into each box detailing how to cook and carve your turkey, a recipe for turkey pie, and information about the farm. It’s even got some interesting turkey facts. For instance did you know that the first meal eaten by Neil Armstrong and Buzz Aldrin on the moon was roast turkey!

Will also likes the fact that come Christmas Day turkey season is finished and you can enjoy some time off, which he admits is rare for a farmer. “Up until last year it was relentless with the pigs, and the cattle – it never stops especially with weekly orders coming through.” 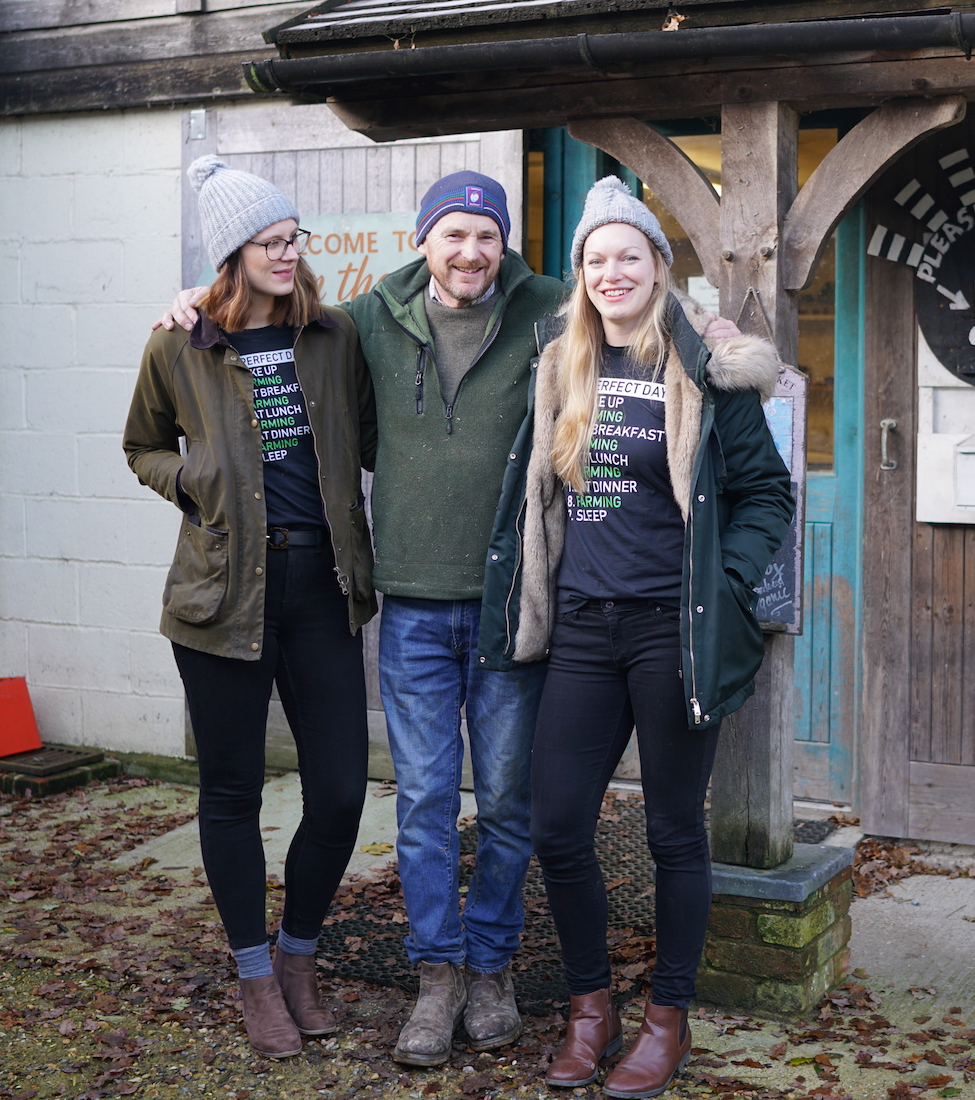 Will and his two daughters Kim and Alice, who help out on the farm at weekends and with turkey marketing

“If I can produce them for around £35.00 that leaves me with a reasonable margin per bird – that’s my aim.” He also cites a growing demand for turkey crowns and rolled turkey breast.

Like a lot of farmers Will has another job to help bring in extra income – carrying out freelance planning and drafting work – often for other farmers. Which he finds both mentally and financially rewarding – “it’s using your brain as well as your hands.”

If you haven’t ordered your Christmas turkey from your local turkey Farmer or butcher already – we’ve got you covered. We’ve partnered with Will to offer you the opportunity to order your turkey through Indie Farmer. This helps support his farming business and our journalism too.

Please email us on hello@indiefarmer.com for more details on ordering your turkey. You can also head over to our meat box page here to find out more about our Sussex beef boxes.