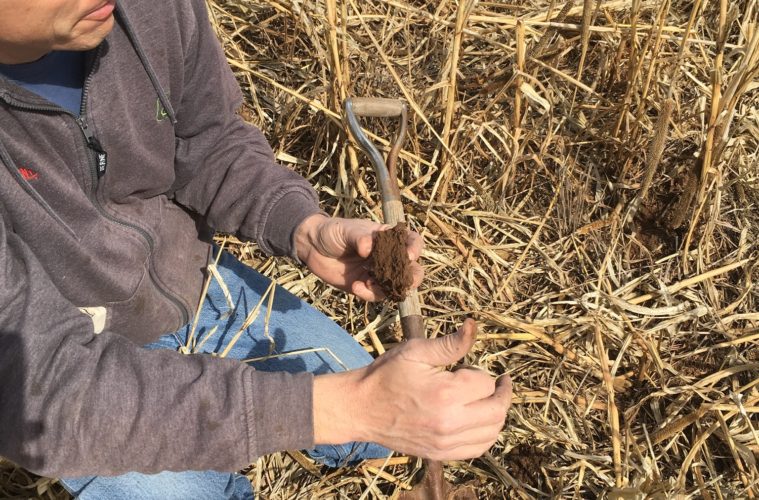 Dan Burdett is back from his recent travels to the USA with an update on his Nuffield experience so far..

As I sit here in early May, my time in the USA seems like a world away. Looking out of the window I see green trees, glowing sunshine and the familiar black and white cows making the most of the verdant grass on offer at this time of year. For much of my time in Iowa and Nebraska all I could see as far as the eye could see was snow, grey skies and seemingly eternal miles of the great nothing that is the Midwest in winter. Even now on social media I’m seeing pictures of corn being planted as the snow falls once again.

Like all farmers across the globe, farmers in the mid west are suffering from extremes of climate that are stretching them to an occasional breaking point. After a late harvest in 2018, they had a very wet autumn followed by a much longer winter than normal. With margins being so tight there is little room for error during the farming year.

Just when they thought the winter was coming to an end as the temperatures began to climb, Mother Nature had one last nasty surprise. The ice building up behind the levies broke through along with torrential rain to leave large swathes of Nebraska under water, with much of the ice now sitting across farms and devastation wherever you look. The damage done for this growing season will be immense.

One of the great environmental catastrophes around the US right now is the dead zone in the Gulf of Mexico, caused by excessive nitrates being washed down through the Mississippi River. This immense river drains most of the Mid West, through the agricultural heartlands, much of which is monocropped, with lots of bare earth to be seen over the winter months. With a huge pig and poultry industry there is an enormous issue in this region with excessive nutrients being applied to the land. I was staggered to see pig slurry being applied to fields over winter, as such a practice is, quite rightly, outlawed in the UK and Europe due to the high risk of nutrients leaching into the watercourses. As the snow began to melt we also saw another issue begin to emerge, that of soil erosion. With little or nothing to cover the soil over winter, I saw gully erosion in most fields we passed on the road. The wet autumn will have made it difficult to plant a cover crop after harvest but I feel that farmers there on the whole were in denial about the scale of the problem, often because of the sheer depth of top soil and that it would see them through ok.

Fortunately I did meet some farmers who recognised this as a major issue and were now true converts to cover crops in order to maintain both soil health and water quality. For some unknown reason, the message was taking a while to sink in. The farmers who were all for change seem to be surrounded by those who didn’t want to, almost as if pride were holding them back.

During our Nuffield conference we were drilled on the values that should live with us as we carry out our studies and further on through life. The one that sticks most in my memory is that of having an open mind. It is all too easy to become narrow minded in our view of how the world should be, particularly with the advent of social media where we simply follow those who we agree with. As an organic farmer I had many moments in the mid west where I came across methods of farming that made me feel uneasy, with my trip to Monsanto (now Bayer) being amongst them. But I often found that the person behind the farm or business was just like me, having passion for what they did and a clear view on what they were looking to achieve. Most farmers deep down knew that change had to happen but were unsure of how that should happen, often because of age or the continued worries over the future security of their farm.

After spending 2.5 weeks in the company of the other amazing Nuffield Scholars it was time to head out for a week on my own to kick my individual study off. I started off by driving into the heart of Kansas, land of Dorothy, corn, wheat and thankfully, sunshine! I headed 3 hours west of Kansas City to meet Justin Knopf, a cereal farmer near Salinas. Justin has been practicing no-till farming for the last 15 years and would be considered a leader in the field.

He has also recently started to use cover crops as part of his rotation of wheat and Lucerne (Alfalfa), which is incredibly important in the dry land farming environment to conserving moisture. What I was really impressed by was the drive he had to change the way he and others should be farming, but even with that he was still finding it a challenge within his local community as neighbouring farmers saw the way he farmed as a threat to them. In order to help him through this Justin had a team that were fully supportive of the way he believed was right to farm. His Agronomist, Garrett, was his right hand man and also shared the same vision as Justin, meaning that they were able to make change happen much quicker and more effectively.

The other reason for visiting Justin was to talk about Grounded Growth, a new business venture recently set up by Sara Harper. The aim of the company is to bring smaller food producers together with innovative farmers in order to tell the story to the consumer of how the food they eat has been produced in a regenerative way. The farmer benefits by receiving a premium for the produce and the food producer is able to sell the story behind it. This seems like a really great way of bringing more power and money back to the primary producers and help them in transitioning to regenerative farming.

Luckily for me, just a few miles away was the Land Institute, an organisation that is researching perennial grain crops. There I met Brandon, a lead researcher in Kernza, a perennial wheat variety that has been grown there continuously for more than 10 years. Obviously the yields are not what you would expect from an annual crop, but with the benefit of being able to make hay or silage from the grass as well, this seemed like a really interesting way to preserve soils from over cultivation.

One of the reasons for growing a perennial crop is to stop the soil being disturbed so frequently. When they run tests on the amount of CO2 released from the soil during cultivation they found that 7 years of carbon sequestration was lost. This is obviously having a large impact on the levels of CO2 in the atmosphere and goes counter to the story that farmers are trying to tell about the sequestering ability of their soil. When I asked Justin Knopf whether it was more important to be organic or no-till, it was the latter that won hands down as he is convinced that being organic would mean he has to start to till his soil again.

The final leg of my journey meant flying down to Atlanta and then heading 3 hours south to the small town of Bluffton, just near the border with Alabama. I was there to visit White Oak Pastures, a 3500 acre farm run by the formidable figure of Will Harris.

The farm has been in the family since before the civil war and they are deeply rooted in the history of the area. Will was making a good living working for a large petrochemical company for many years, but then in the 1990’s had a realisation that the way they were farming was eroding the health and resilience of the farm. He therefore began to graze more and more of his cows and realised that he could see the land begin to heal itself. Today they have a 1000 cow herd of suckler cows plus, pigs, sheep, goats, chickens, ducks, geese and rabbits who all form part of an amazing symbiosis between animal and land. He is now buying more and more land locally and putting it through his ‘healing’ process, which starts with hay bombing a field, a process of buying in hay and spreading it all over fields previously used for peanuts or cotton and trampling it in with his cows over winter. This reintroduces organic matter to the soil and is then followed by the birds who scratch around and add their own nutrients to the soil. After 5 years he will have a highly productive field of native mixed pasture.

The part of the farm that makes the business really work is the slaughter house. Because they have the ability to process all the livestock through this facility they are able to tell the story of the journey that animal had from farm to fork in a way that many of us would struggle to do as animals are usually sent away to a distant abattoir. They are also now really benefitting from the likes of Amazon, as they are now able to easily sell direct to the customer through their marketplace, with 10% of their sales down this channel last year, with expectations for rapid growth in the coming 5 years.

The part of the business that really grabbed my attention was it’s success at social regeneration. They were now employing 165 people in a very rural and poor area where job opportunities are rare. The passion shown by those staff that I met was incredible and despite the size of the business they had a good understanding of the whole operation. People travel from far and wide to knock on Will’s door asking for an opportunity to work with him. He is also buying up all the derelict buildings in town and regenerating them as well to bring the community together. To me this showed the ability of farmers to be able to bring about both environmental and social change.

My last visit was a chance opportunity to visit an urban farm in Atlanta. The Metro Urban Farm was nestled within a fairly deprived suburb and I guess you would say it would be classed as a food desert for the lack of affordable and nutritious food on offer in the local shops. I spent an amazing 2 hours with the farm manager, Moses, a 75 year old man who had an incredibly long sighted view on the world and the impact that food production and farming should be having on each generation.

The farming methods they used were a really interesting mixture of lessons from his grandparents and modern app based technology. Moses was driving much of this with his insatiable desire to innovate and look to change. And as this was a community project he was able to pass on his undoubted talents to other generations. In fact, one man I spoke with there on his first day of community service, was blown away by being able to learn from the older generation, something he felt was unavailable in other walks of life. So once again I saw the ability of farming to be able to bring about social change.

Now I’m back home and consumed by the farm once again but with more exciting travels to come to find those key ingredients to change.