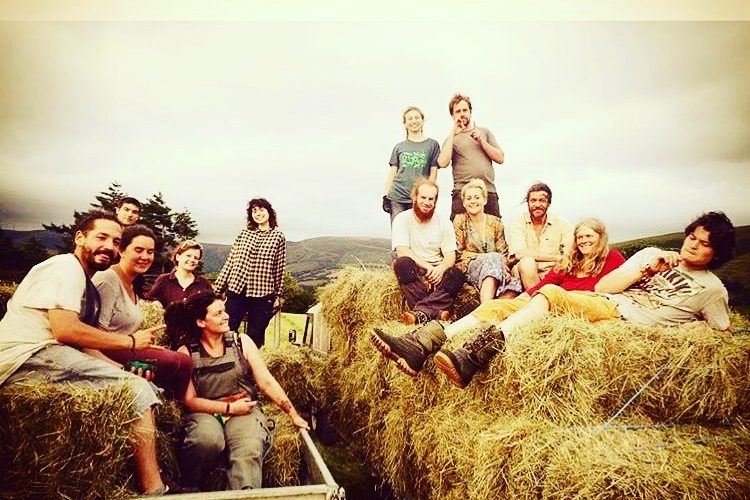 Writer and Cheese maker Camilla Ker A.K.A The Renegade Milkmaid explores the link between Small Scale Farming and Mental Health.

It is a Wednesday afternoon and I am walking through the city with the noise of sirens and screaming school kids around me. My best friend calls me. I met her on a farm in Wales and she is an amazing grower and dairywoman, but today she is in Leeds for a hospital appointment. “Camilla… I am freaking out in the city. Its awful. There are people everywhere and they have that blank look in their eyes.” Yes, I think. Welcome.

This friend of mine thrives with space around her. She is strong and full of knowledge that most twenty somethings aren’t interested in. Fencing. Clipping sheep toenails. Wrangling animals. Tractor driving. Wool grading. Butchery. So much knowledge.  But in the city, she sort of wilts. In 1950, the population living in UK cities was 79% – already a large figure – but one which is set to rise to 92.2% by 2030. Depressing. It would be easy to imagine rural life with rose tinted glasses on but that is better than not considering it at all.

Joel Salatin describes how his father bought a derelict piece of land and slowly built up the completely depleted soil over his lifetime using natural methods like composting, to turn land that had been ruined by Big Ag into a thriving smallholding that could sustain life.

The whole concept of taking something depleted and run dry by ‘the man’ and replenishing it slowly echoes what a lot of us land worker types are experiencing. At the ORFC I met a man, lets call him James, who said he has been WWOOFING for 3 years because it helps combat his depression. Working outside is healing but it isn’t just working outside that people are drawn to. It’s the community and camaraderie that is found on small farms that is so good for people’s mindsets. On a small farm the tasks are naturally going to be more varied which is again key for keeping people enthused and motivated.

My personal interest in farming came from my time at Old Chapel Farm in Mid Wales. I went there because I was in a hole of depression and my sister suggested I go WWOOFING. I finally and reluctantly went to the farm for a two-week holiday and ended up staying for 9 months and loving every minute of it. Experiencing life on Old Chapel Farm switched me from depressed to purposeful and contended. Working outside, living communally and milking a cow every day showed me that my depression had been a natural reaction to living a life that wasn’t aligned with my value system.

I met countless volunteers on the farm who had found the same thing.  Elouise*, 29, from France, told me “Every time I feel like my life is falling apart, like I can’t cope any more, I come back to the farm for a few weeks and it sorts me out, makes me feel like I can breathe.” Elouise has been returning to the farm every summer for 7 years. In other words, her life and her value system are not aligned, hence why she needs to return so often to the farm to feel good again.

In fact, UK scientists suggest that a type of friendly bacteria found in soil may affect the brain in a similar way to antidepressants. Their findings are published in the early online edition of the journal Neuroscience. Researchers from Bristol University and University College London discovered using laboratory mice, that a “friendly” bacteria commonly found in soil activated brain cells to produce the brain chemical serotonin and altered the mice’s behaviour in a similar way to antidepressants.

Here’s to soil under our fingers, muddy wellington boots and #farmlife. Yes, I am really getting the rose-tinted glasses on now, but I’ve seen countless people arrive at Old Chapel Farm depressed and leave optimistic, and I want as many people to experience that transformation as possible through small land-based communities, allotments or whatever they can get access to.

On the flip side, farming for a living comes with a huge amount of pressure and multi-year droughts have caused rising suicide rates amongst Australian farmers. Rural life can be isolating but ironically it’s the very people who provide stability and feed us that are the first to be affected by economic or climate changes. In the U.K. approximately more than one farmer a week in the UK dies by suicide. (ONS)

Solidarity between food consumers and food producers can only improve mental health for both parties and urbanites experiencing life on small farms is the best way to build solidarity and, in turn, better mental health.