On Sheep: Moving from the City to Small Scale Sheep Farming

There is an inherent contradiction in writing and talking about or in any way exposing your life as a small-scale sheep farmer. At least for me.

When I started as a shepherd it was because I wanted to be less dependent on the industrial way of producing food, and in particular meat. If you cannot produce your own food you are inevitably intertwined with an industrial global network of oil-powered machines and vehicles. I wanted to free myself from that network. Not just because of its bad effects on the biosphere, but also because it made me feel uneasy. Whether it’s feeding the sheep, counting them, keeping their winter bed dry, helping lambs survive when they are small and confused, fencing the right field for grazing, or even ending their life when the time comes, it feels meaningful. And I don’t think it has too much to do with saving the planet …I myself don’t feel that I make that much of a difference. It has something to do with the direct and concrete contact that I have with the basic needs in my own life – almost a childish urgency to look at the grass, feel the rain and the sun, and realise that I don’t need anything else.

Our highly technological civilisation is fantastic, letting us connect with whomever, wherever and whatever at all times. It has created possibilities and relationships that we could never have imagined just some years ago. But its effects are also stressful, always urging our society to purchase, to follow, to experience and to achieve. To have my own little herd of sheep, providing me with support, company and direction in life is meaningful and rewarding in a profound and genuine sense (and I don’t take these words lightly).

Even though I didn’t quite understand it before, I think maybe this inner feeling was the real reason I moved away from the city and escaped the academic and urban life that I led. Precisely like the production of all goods that supply our lavish lifestyle in a practical material sense, all our plans, ideas and fantasies about what we do, and our future are formed in a large-scale system.

I used to teach students a course in rhetoric as a literary academic. It was a very popular course. Students from a variety of fields wanted to sit in my classes because they found it an intriguing addition to their studies. Or rather, it was a final confirmation to them that appearance is (almost) everything. I taught them to be able to present and package whatever education or future work they might have in a catchy and exciting way. It was as if the full meaning of professional life, or perhaps life in general, could only emerge in the form of a speech in front of a group or an online article gone viral. The explosion of social media explosion is just a logical extension of this. Every tiny decision, every tiny detail in our life can, or must, be launched into large-scale, technological and global context.

To me, becoming a small-scale shepherd also meant becoming a small-scale cultivator of my inner self. Article about my change in lifestyle didn’t appear in the local (or even national) Swedish press despite much interest. I didn’t attempt to promote my new life on the farm on Facebook. In fact, I didn’t even talk that much about it. I just did it. 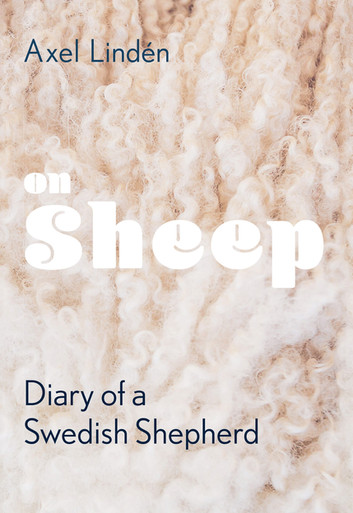 Then I wrote the book On Sheep. It might sound hypocritical now, but the process of writing the book was a small-scale project at its roots. I just wanted people in my family and on the farm to understand me and my motifs. Sometimes I even wrote to no one else but myself, to get a grip on my thoughts. Somewhat ironic the book now literally travels around the world. Apparently, it will come out in South Korea!

On Sheep by Axel Lindén is published by Quercus in Hardback on 20th September, £9.99