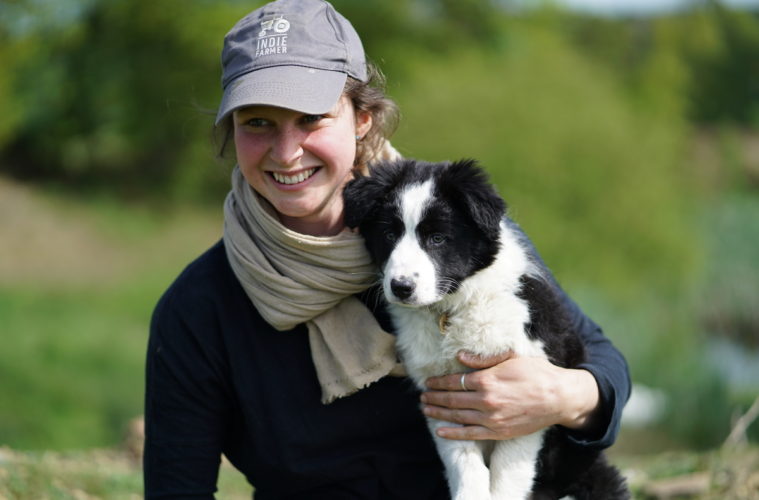 Gala is back with a spring update after a busy few months at Plaw Hatch doing what she loves best. Those of you who follow her Instagram account (farmergala) will know she’s got a new apprentice who we were delighted to meet when she dropped in for a cuppa recently…

Spring has really arrived and it feels as though summer is fast on its heels. Calving and lambing are both over and all the animals are now out grazing, rooting or scratching. The grass got off to a great start and although the lack of rain is now giving it a bit of a check, the early flush was much appreciated for lambing. Plaw Hatch is surrounded by the Ashdown Forest and the variety of greens on display from all the different trees coming into leaf are incredible, especially now that huge areas of the forest floor are carpeted in bluebells!

The day my first JacobxLleyn lambs arrived was very exciting. As expected they are primarily black with white spots and lines. Apart from one ewe lamb who has classic Jacob markings. I’m really excited to shear our first ones in 2018 to blend with the Lleyn wool. Although lambing is only brief, 18 days this year, it’s a long process from when the ewes are tupped. They need to be dagged, scanned and body condition scored, the right grazing needs to be selected and supplementary feeding needs to be calculated. If you’ve got all this right you can be in for an easy lambing assuming there are no complicating circumstances, which there usually are!

“Although lambing is only brief, 18 days this year, it’s a long process from when the ewes are tupped. They need to be dagged, scanned and body condition scored, the right grazing needs to be selected and supplementary feeding needs to be calculated” 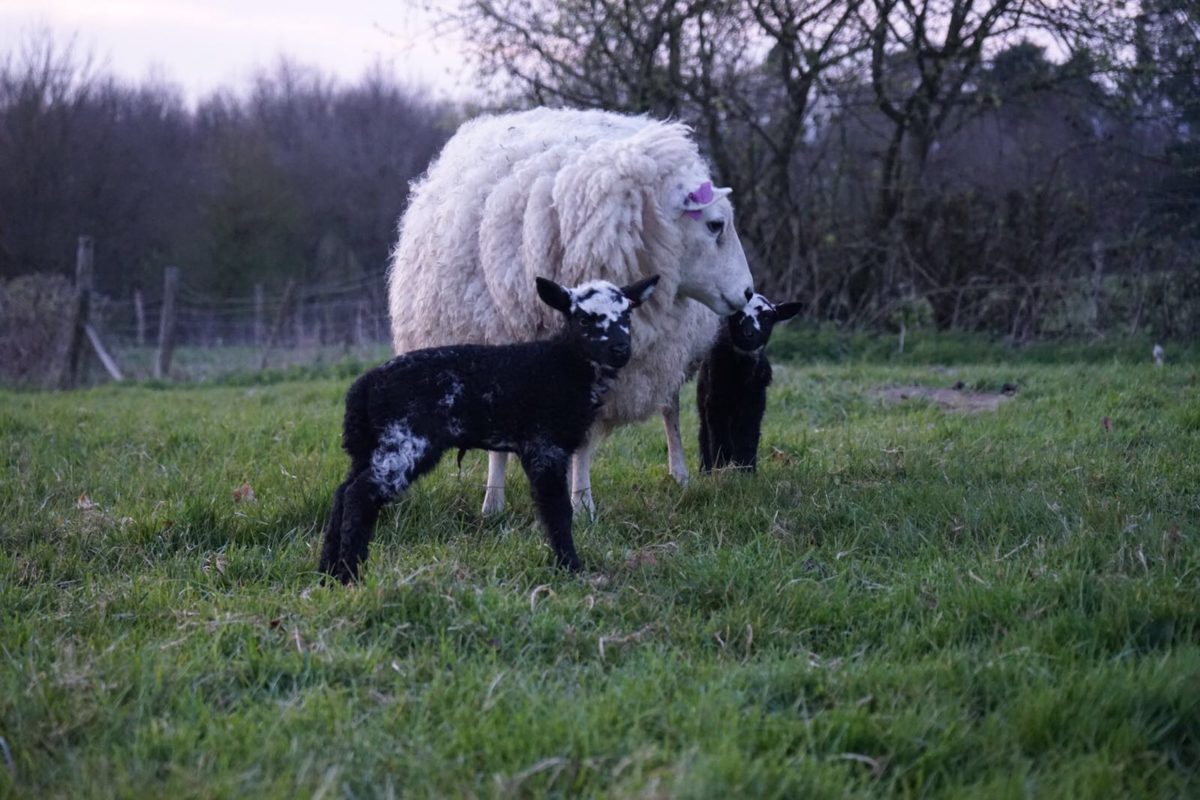 A few weeks before lambing I was presented with a new challenge as the triplet and skinnier twin bearing ewes had an outbreak of orf. It seems that they had caught it from a group of 2016 lambs that had escaped and got in with them while they were off the farm. Orf is a little like a sheep version of a cold sore. It spreads easily through a flock and can also effect humans. I sorted through the flock and removed only 5 out of 25 that I could see had scabby mouths. There is no conventional treatment for orf and although you can vaccinate against it, you can’t treat it. As a result of this I tried a homeopathic nosode. It’s hard to say whether it helped as I’ve never seen an orf outbreak which hasn’t been treated with it, but in the end only 6 ewes were effected and they had almost completely healed up before lambing. None of the lambs were affected which was huge relief as our vets were pessimistic about my chances of getting through lambing without the lambs getting it. Unfortunately orf, also called thistle mouth, will return periodically if the ewes immunity is challenged or they get too involved in eating thistles. 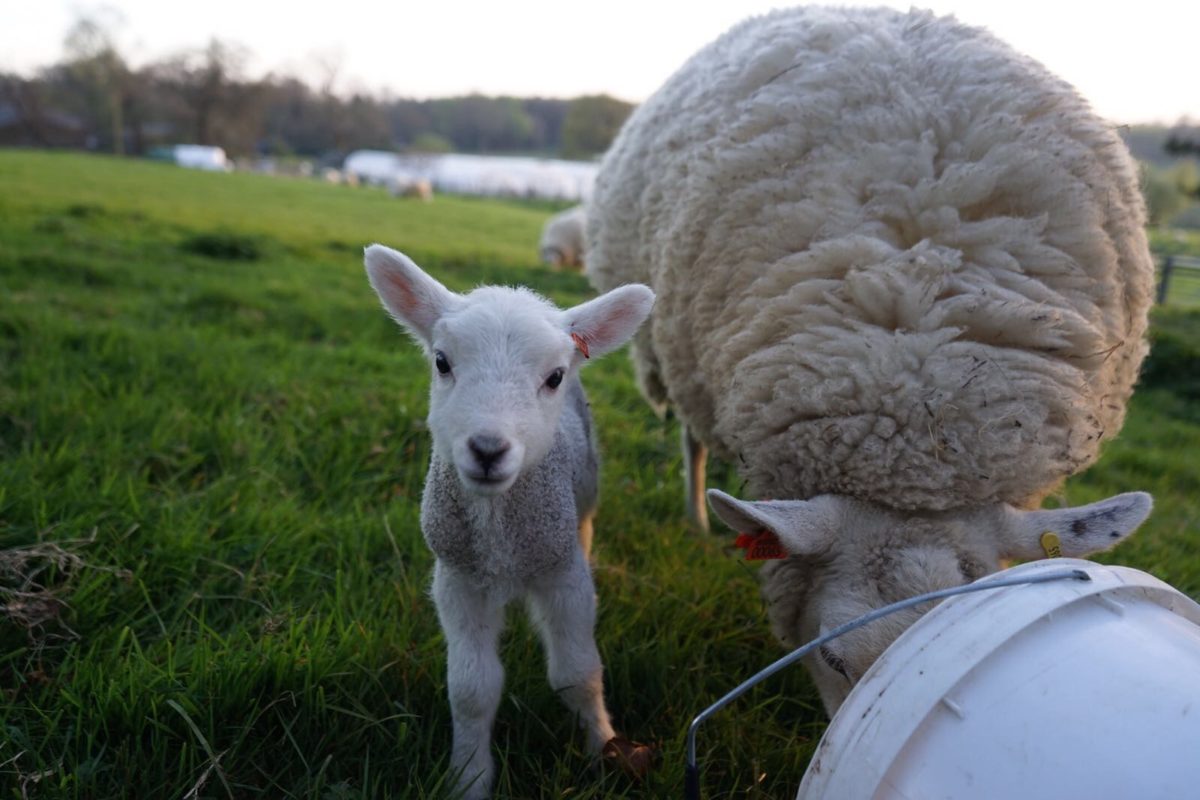 Just before lambing started a casual conversation with James at the abattoir led to my “just looking” at some border collie pups . “Just looking” of course led to my putting down a deposit. Luckily my boyfriend, although surprised, took the arrival of a pup in his stride – what’s another four-legged creature when you’re with a farmer? So, Pip the pup is now 10 weeks and getting into the stride of Plaw Hatch Farm life. Although initially terrified of cows she is now happy to follow behind them when I bring them in and then sleep outside the parlour while I’m milking. Iona, one of our milking cows who was hand reared, is a little over interested in her and I have to watch her closely or she’s inclined to poke her nose right in Pip’s face and I’m not sure Pip’s got the confidence to deal with that just yet. Chickens are of course a different matter and Pip is getting very good at leaving them alone and she loves coming chicken cleaning with Ruben and I.

The week after next I’m going on a shearing course with the British Wool board. I am really looking forward to learning how to do this properly. I did shear my ram last year and I dag our ewes but I’ve never had any proper instruction so it will be great to get to grips with proper technique and maintaining kit. I am however going to leave shearing the 60 odd animals that need shearing on the farm to the professionals, although I might practice on a few.

Next week I’m going to be moving the ewes and lambs to their summer grazing away from the farm. With this and the temperature rising shepherds all over the country will have parasites in the forefront of their mind (delightful, I know). Being organic, routine treatments for worms are not permitted and all treatments must be in response to faecal egg counts. Last summer, despite regular egg counts and moving the sheep every three weeks, I failed to keep their worm burden low enough and had to treat far more than I would have liked. This year I have a new strategy largely informed by a brainstorming session at the excellent Holistic Management course run by RegenAg with Tony McQuail that I did back at the beginning of the year. There were many suggestions made during the session and I have just taken a few. I wormed the ewes at lambing 48hrs before moving them onto “clean pasture” (grass not grazed by sheep for at least a year). I will move the ewes and lambs once a week as although a lot of worms have a 3-week life cycle, this can be 2 weeks in warm damp weather. The lambs will be weaned onto clean grass, as I’m lucky to have newly seeded leys to graze our lambs on. I will of course continue doing egg counts monthly. The latest tests were all clear!

One last bit of news is that I will be purchasing 30 Lleyn ewes for the farm this autumn. We also have 12 homebred shearlings to join the flock. After culling out a few ewes who have problems, this will bring the flock to 85 for next lambing. This is a four-fold increase from when I started 4 years ago and should allow us to provide the shop with lamb year-round. It is quite exciting if a little intimidating!