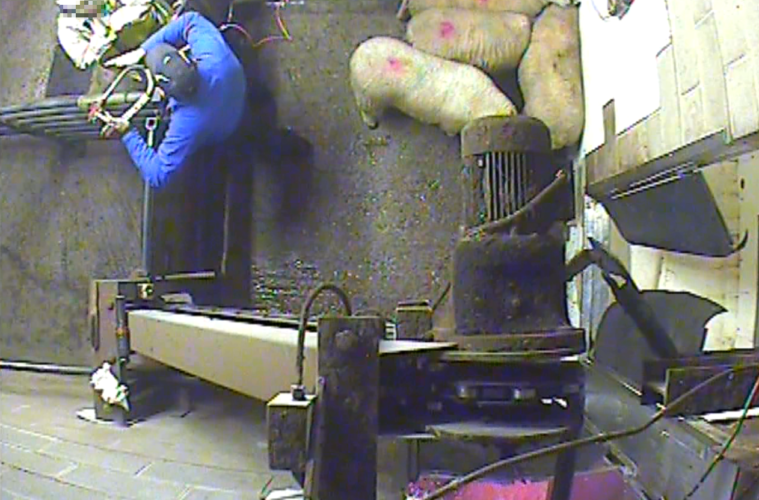 Data obtained by The Bureau of Investigative Journalism highlights how  meat hygiene inspectors and vets working for the Food Standards Agency  (FSA) endure regular abuse and intimidation – and in some cases  physical violence – in slaughterhouses across England and Wales, with  180 incidents recorded over a 36-month period.

On more than twenty occasions between January 2013 and July 2016, the  data reveals, the FSA was forced to withdraw inspection staff from  abattoirs completely because of concerns for their physical safety and  welfare – a measure regarded as a last resort.

Unions say the problem is more widespread than the figures suggest,  with incidents going unreported. A Unison survey of meat hygiene  inspectors found that, last year, 51% of respondents had been the  victim of bullying and harassment. One inspector said the situation  was so bad he had considered suicide, according to the union.

Although many of the abattoirs where incidents have taken place are  smaller facilities supplying butchers shops or wholesale markets,  plants operated by large meat processing companies also appear in the FSA data.

The FSA told the Bureau that the bullying and harassment “can  seriously impact on or even prevent [inspectors] from carrying out our  regulatory role”. There are around 850 meat hygiene inspectors and  official veterinarians working in abattoirs in England and Wales.

The situation was described as “wholly unacceptable” by one leading  food industry expert: “The public buys food expecting it to be safe,  yet here we see levels of inappropriate management and poor work  culture which help explain why food poisoning statistics stubbornly  fail to come down, said Tim Lang, Professor of Food Policy at City  University. “The Food Standards Agency has been weakened by cuts but  it must be held to account.”

Henry Smith, Conservative MP for Crawley and co-chair of the All-Party  Parliamentary Group for Animal Welfare, said: ”There seems to be an  endemic general abuse problem with some of the abattoir sector – [affecting] both food standards staff and livestock – and [this]  highlights even more the case for compulsory independent CCTV  monitoring of their activities. Such offensive behaviour is both a  risk to public health and animal welfare standards.”

“These incidents show just how bad tensions between the regulator and  those being regulated have become. Many slaughterhouse operators and  those that represent them resent all oversight,” said Isobel  Hutchinson of Animal Aid. “The FSA must stand up for its vets and  should prosecute anyone who threatens, intimidates or physically  attacks them as they try to do their job.”

The official FSA records reveal that between January 2013 and July  2016 there were 180 incidents reported to the agency’s Health, Safety  and Wellbeing Team, including 106 instances of verbal abuse, 51  incidents involving aggressive behaviour, 7 physical assaults and 15  acts of intimidation, amongst others.

Physical assault involves “unwelcome physical contact, including an  actual physical attack or where a person genuinely believed they were  going to be attacked” and verbal abuse covers other incidents  “including those that relate to the use of sexist or racist remarks.”

In most instances, the data reveals, abuses were dealt with by a  letter to the Food Business Operator (FBO), a mix of formal and  informal meetings or other – unspecified or unrecorded – action.  Mediation was used in 16 cases.

Formal investigations were launched on seven occasions, the records  show, and six cases – including three involving aggressive behaviour,  one incident of intimidation, one of verbal abuse and one assault – were referred to the police. On 21 occasions, the FSA was forced to  take the most drastic action and withdraw inspection staff from the  premises concerned.

The agency told The Bureau that due to the significant effect this can  have on the commercial operation of an approved premises, the  withdrawal of service “would be a measure of last resort and where other options would be insufficient to protect the health and safety of FSA staff.”

“It will only be considered where a single incident is considered to  be of a sufficiently serious nature, or where there is evidence of  continued or persistent bullying and harassment have been established  to an extent which may pose a risk to health and safety,” it said.

Although the FSA said it was impossible to quantify the number of  non-reported incidents, one industry source said the figures “were  only the instances that get reported, there will be plenty of day to  day abuse that is just accepted as part of the culture and  environment.”

A Unison survey of its meat hygiene inspector members found that 62%  of respondents had witnessed bullying and harassment in the past year,  and that 51% had themselves experienced it. Most – 68 % – said those  responsible were either meat plant owners or workers. Intimidation was  the most commonly cited form of bullying – 39% – according to the  survey, followed by shouting – 36% – and abuse, at 24%.

“Our annual survey is the real picture and it shows that our members  who serve the public and protect our meat supplies are being bullied out of the job, said Paul Bell of Unison. “Even administrators are  being bullied. One respondent has said they feel like committing  suicide because of the bullying they receive and the lack of action to  tackle industry from their manager.”

The FSA said: “We adopt a zero-tolerance approach towards work place  bullying and harassment. Individuals are encouraged to report  incidents of harassment or bullying at work, whether they are the  recipient or witness to an incident. All allegations of bullying and  harassment will be investigated and, if appropriate, action will be taken.”

“We have put in place a programme of training and support for our  managers to ensure that in the first instance we can support our  inspectors and work collaboratively with food businesses to uphold the  standards of expected behaviour.  We also continue to communicate to  food businesses and their representative organisations the importance of upholding these standards.”

Earlier this year serious hygiene failures in UK abattoirs were  uncovered by a Bureau investigation which found 1 in 4 meat plants had  failed a key food safety test during official audits.