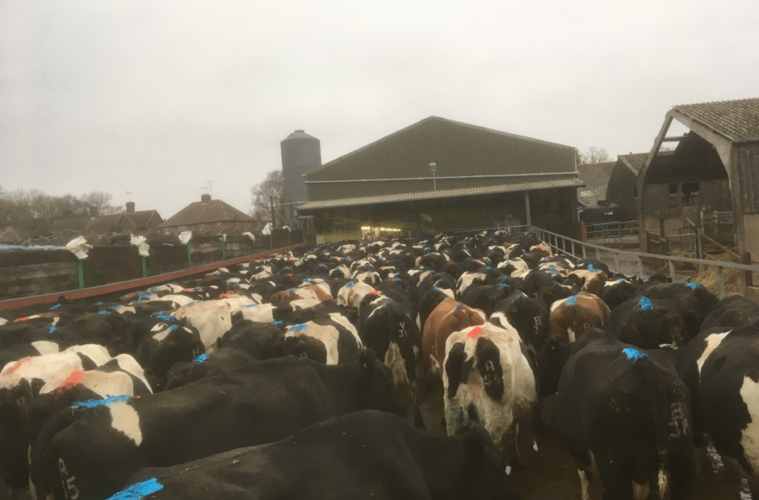 The fact is that the climate is changing, whether we like it or not, and we must do something about it says Organic Dairy Farmer Dan Burdett

Despite many years of scientific proof, climate change remains a deeply divisive subject to many, with the naysayers treating this as yet another conspiracy.  The election of Donald Trump does the cause little good and, crucially, could actually set us back during a period when more resource should be diverted towards our understanding.  I actually got to thinking about this last night at 10 o’clock as I stood watching for any cows in heat as I do for most of the winter.  The thing was that I was still wearing my shorts, in fact they haven’t transformed into trousers this year due to the mild weather and the forecast is for more of the same to come.  This does seem to be a general trend in recent years and certainly makes our life over the winter that much easier, but is this a good thing?  If this trend continues and we are able to grow grass all year round should I change my farming system to benefit from it?  Should I look toward the Mediterranean for inspiration?

The fact is that the climate is changing, whether we like it or not, and we must do something about it.  You only have to open a Sunday paper to see ideas for giant sink holes in the ocean or deep trenches in the earth to capture carbon dioxide to see how expensive a project this could become.  However, the answer is much closer than we think, in fact it’s right under our feet.  The soils around the world have the ability to sequester enough carbon dioxide to take us back to pre-industrial revolution levels!  By building up soil organic matter levels, farmers across the globe can be planetary saviours and produce more nutrient dense food as well.  In fact this is now being recognised at government level in France with the 4 in 1000 initiative to increase levels by 0.4%.

At the recent seminar held by Graham Sait this theme held throughout the 2 days.  He reckons that our understanding of soils in this country is years behind countries such as Australia, where farming in less favourable conditions has ensured that farmers are looking for an alternative to the failed green revolution.

As I sat listening to him talk about the right balance of minerals in the soil, encouraging soil microbial life and building levels of humus I realised how far we still had to go on our journey here at Cockhaise.  I’m particularly worried about our cultivation techniques, which mainly involve a plough or several passes with a cultivator in order to grow a new crop, and pretty much destroys much of the life built up in the soil over a number of years.  For this reason I’ve decided to take on an organic agronomist, who will be able to help us build a strategy for the coming years to help achieve the target of growing as much grass here as a conventional farm.  For many years I believed that we should be able to make all of these decision alone, but recently I’ve realised that we’re only going to get better by bringing in the best people, something that has reaped dividends so far.

Graham also talked a lot about looking after ourselves and watching what we eat.  In general we’re not being very kind to our bodies these days, with plenty of stress, poor diets and a lack of sleep contributing to ever-growing health problems.  Unfortunately farming is no different, as the long hours, solitary working conditions and financial pressures have created one of the highest suicide rates among UK industry.  We need to be able to recognise this both in ourselves and our peer group in order to slow this terrible growth.

Back on the farm, we’re approaching Christmas and things are starting to quieten down now as the nights draw in and the desire to be outside diminishes.  We started our mating period on 17th November and so far things have gone pretty well.  Cows cycle every 21 days or so and therefore we aim to mate as many of them as possible during these 3 weeks.  This year we achieved 92% of the cows and 99% of the heifers (15 month old) and the first part of the next 3 weeks has been fairly quiet, so we’re keeping our fingers crossed that plenty of them are in calf already. 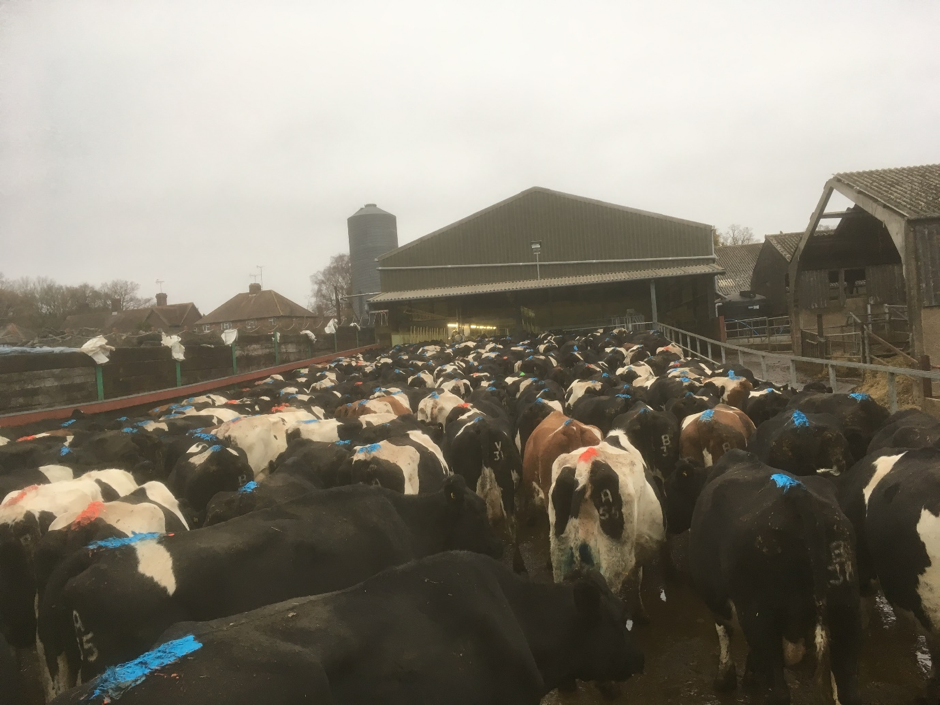 We start with all of the cows having red tail paint, which is then changed to blue once they’ve been served, which gives us a great visual idea of how well we’re doing and which cows we need to keep an eye out for.  We continue to do this for about 3 months, by which time the vast majority of cows will be in-calf.

This all bodes well for our expansion plans next autumn, when I hope to be able to have my heifers reared elsewhere, therefore allowing another 50 cows to be milked next winter.  Before I go ahead with any expansion I need to consult with our cooperative, Arla, that they are happy to take such a big increase in milk from us.  As they are in the process of launching their first ever branded organic milk and with initial sales looking promising, they are actively seeking more in our area, so it looks as though we’re on the right track.

December saw our calves finally come inside for the winter, after 4 months happily munching grass outside. 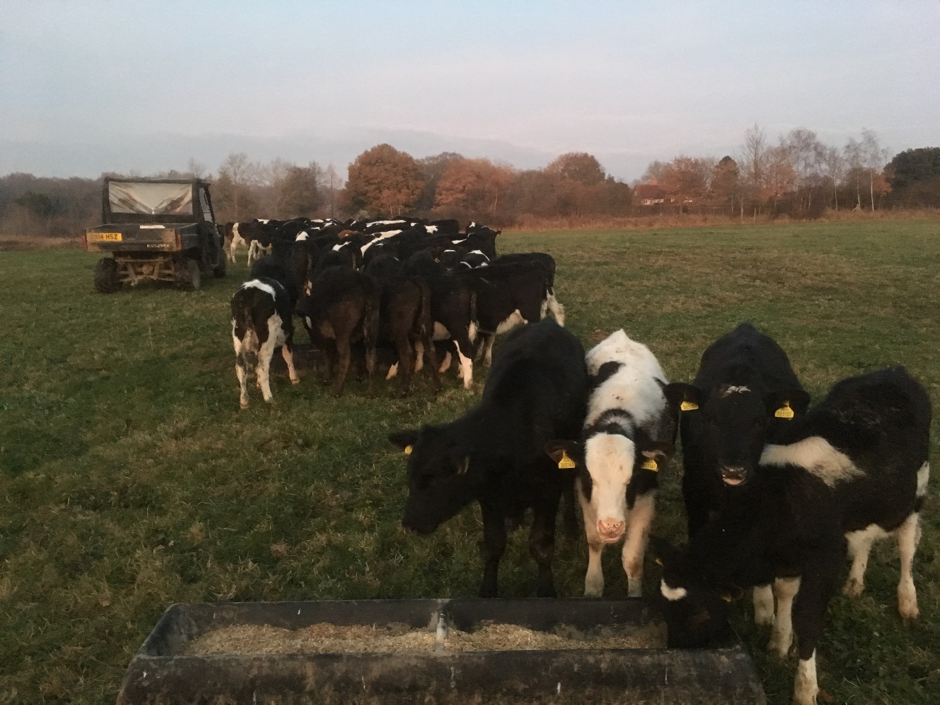 The weather has been very kind to us this autumn, with ground conditions being ideal for leaving them to graze for slightly longer than normal.  It’s amazing to see the extra coat they develop as the temperatures drop and I’m sure that if we had enough grass for them they could stay outside throughout winter.

As they’ve never seen a building before, it took a fair amount of persuasion for them to be guided into their winter accommodation, with a mixture of gentle coaxing mixed in with a little more determined guidance required to finally see them home.  One of the main reasons for bringing them in is to eat good quality grass silage to help maintain a good growth rate, but also for them to learn the art of self-feeding behind an electric fence. 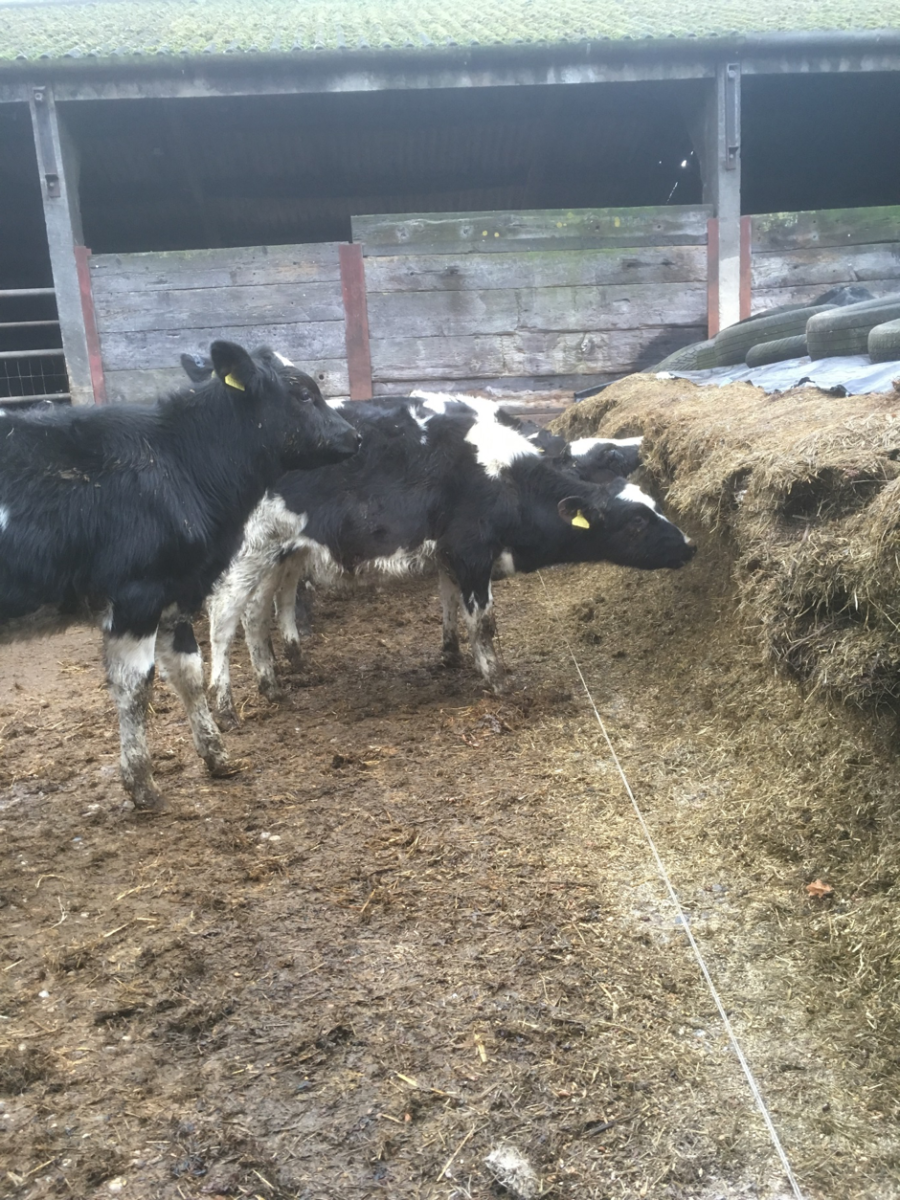 The sweet smell of silage

They find eating under it perfectly normal, but the challenge is to get them eating over the wire as this is where much of the food is.  To do this we regularly drop the wire onto the floor over a period of weeks until we get enough used to eating over the top.  Once this happens they are set for a successful life here. 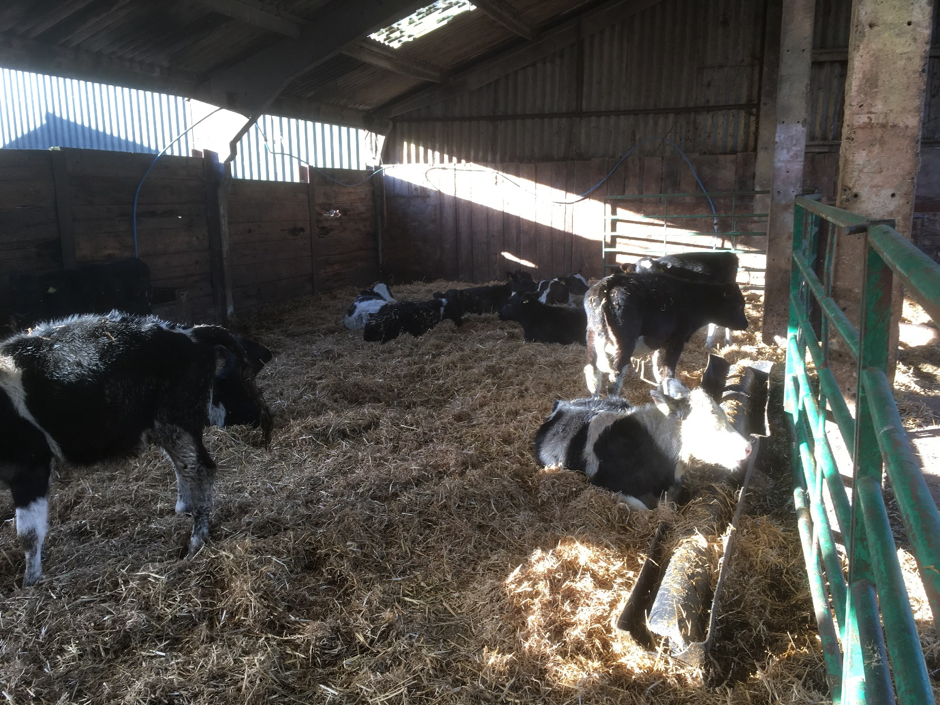 A nice warm bed of straw

We also need to keep them well bedded up with straw to keep them warm, content and in the right shape to keep on growing.  I now place a huge emphasis on our youngstock rearing as I know that the future success of our business here is based on it.

I wish you all a very happy Christmas and an enjoyable New Year.