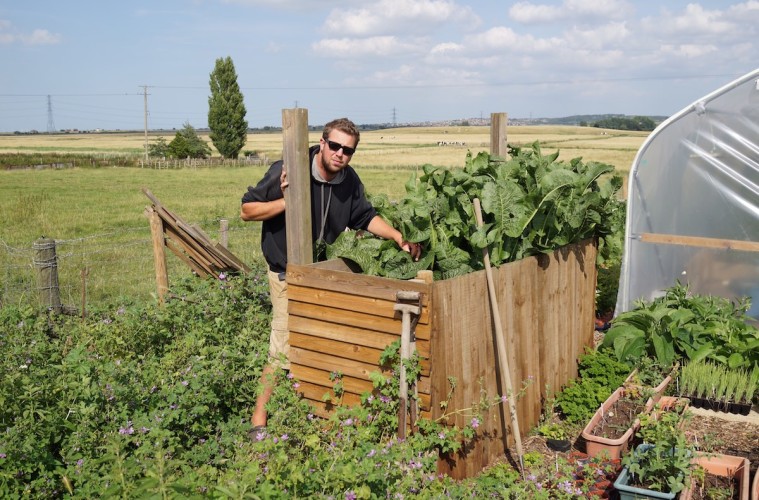 We welcome Kent based small-scale Market Gardener, Egg producer and Entrepreneur Jack Boggia to the Indie Farmer fold. In his first post we hear about what’s been happening on his 1.5 acre holding and the people that have helped shape the way he farms..

As of now the start of this years growing is in full swing. Where we are in Kent the ground has warmed up enough to sow hardier crops direct like salad turnips and radishes, with watercress, kale, and pak choi to name a few to follow. As we enter the hungry gap there still is a lot of food to harvest, even though the winter veg is coming to an end. A lot of the crops I just mentioned are quick to come up, and if fleeced or transplanted can come very quickly with the longer days and warmth in the sun. We have been sowing seed trays in the tunnel full of edible flowers and salads as well as some brassica transplants to help fill up the gaps. It’s a bit late but this week I got all the summer and winter squash seeds in and the courgettes. 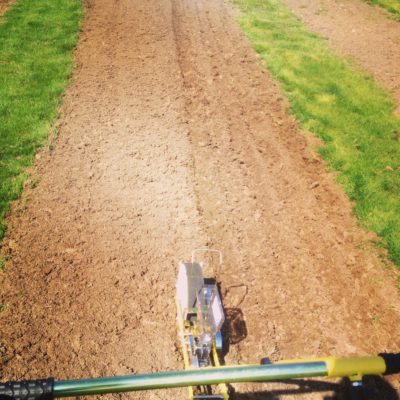 Back in February I started the peppers, toms and some cape gooseberries in trays in a relatives conservatory. Come the end of the year I’ll invest in some heat mats to make a heated propagation stand to start them in the tunnel. All the toms are now in the ground but the peppers are too small yet. Also back in January I mulched the poly tunnel beds again with composted chicken litter. The vigour in the toms in just 2 weeks is amazing! I got the idea from ‘No Dig’ guru Charles Dowding who’s books are still a go to for me on a 1.5 acre scale.

Last October we got the next batch of laying hens as day old chicks. It worked out a lot cheaper to rear them myself, and it’s nothing I haven’t done in the past. From previous sales I was confident I could sell 1000 eggs a week, so 160 birds could meet that demand. I am already a Free Range certified producer, and the eggs do ever so well at markets. 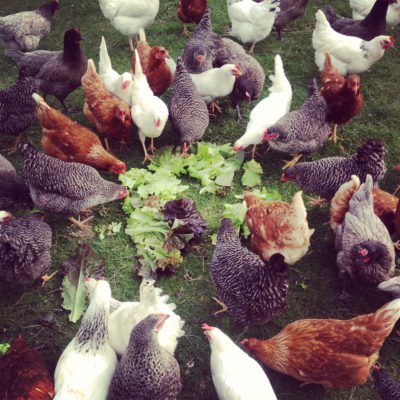 The winter time is when I sit back and plan the following season, from deciding which crops, tools, harvesting methods and sales options all in great detail. As it happens a neighbouring farm went up for sale and the new owner was selling remaining sheds and equipment. If you’re looking for sheds for sale, you may want to check online to make sure you get the best deal! I guess I was just very lucky. I snapped up 3 old chicken houses all of a decent size, one for a new packhouse, a new chicken house (allows me to increase the number of birds), and a secure tool shed. Whilst visiting another small-scale juice and cider producer I came across some blown down poly tunnels in a field. On the off chance I knocked on some doors and luckily for me the owner was in! We chatted and I managed to get a good deal for them. Just goes to show one man’s junk is another mans treasure! I don’t have anywhere to put them up yet but they were such a bargain I know it will pay off in the future.

I also came across some new seeders and harvest equipment which I have only seen for sale in the U.S. until now… With more people turning back to the land and the increase of consumers wanting honest answers of where their food comes from I had the idea of making such tools available in the UK. So I had the idea of Growers Friend. Although it’s work in progress as running a farm is my main focus, I’ve been adding tools on there bit by bit. I’ve also had ideas for tools which I will be making prototypes of next winter then have them available online. My main focus is to move away from mechanical engine powered tools and focus on smaller human scale tools which could match output. Not only is this good for the environment, it saves money, time and is far less damaging to the soil we rely upon so much. One tool I’m very excited and can’t wait to use is called a Stand up Planter. Being 6’5’’ transplanting isn’t my favourite job so being able to stand and plant means my output is increased and I save my back for another day.

A lot of these tools are already in use by more well known growers across the pond like Jean-Martin Fortier, Curtis Stone and Elliot Coleman (which conceptualized most of them). Jean-Martin Fortier has recently filmed a documentary about his 1.5 acre farm in Quebec and how he turns over $150,000+ in sales. I have a copy on it’s way to me and am planning to review it in a future post. Curtis Stone has regular field updates and videos on his Youtube channel and also answers viewer questions. All of his videos are well worth a watch.

If you have any questions please leave a comment below..