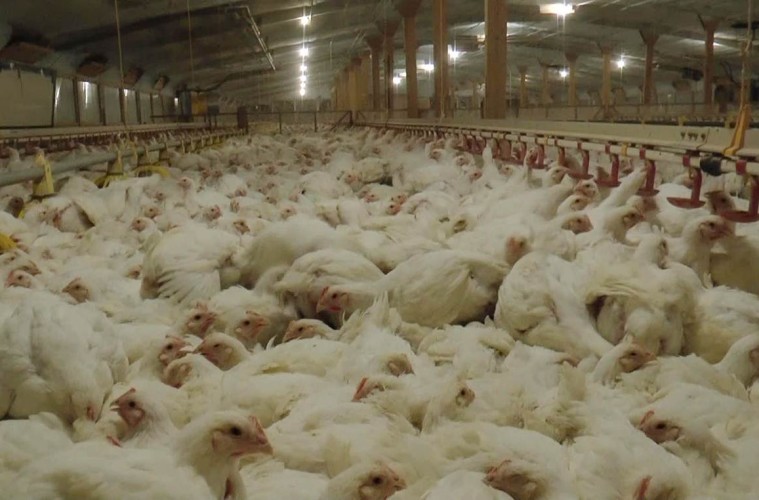 The use of controversial antibiotics in UK poultry farms is putting consumers at risk from drug resistant infections, reports Andrew Wasley

Antibiotics banned in US chicken farms a decade ago over links to the spread of potentially deadly bacteria in humans have been used in significantly increased quantities by Britain’s poultry industry, an investigation has revealed

Industry figures obtained by the Bureau of Investigative Journalism show that UK poultry producers upped their use of a class of antibiotics known as fluoroquinolones by 59% in the latest 12-month reporting period – despite strong evidence they could be fuelling drug resistant forms of dangerous food poisoning illnesses in humans, including campylobacter, salmonella and Ecoli.

The antibiotics are used on factory farms where chickens and other poultry are intensively reared in sometimes crowded conditions that can encourage the spread of disease.

But serious problems arise because the same class of drugs are also used in human medicine to treat people who suffer severe cases of foodborne infections.

Experts warn their overuse in livestock farming has encouraged the bacteria behind these infections to evolve and become immune to the antibiotics’ effects.

It means consumers who contract the bugs – often from infected poultry meat ­–  and subsequently develop complications could find their lives at risk because they may not respond to antibiotic treatment.

Professor Mike Catchpole, one of Europe’s leading infectious disease experts and chief scientist at the European Centre for Disease Prevention and Control (ECDC), told the Bureau there already was evidence of an association between drug resistant salmonella and “excess mortality” – and that patients seriously ill with resistant forms of campylobacter were at “greater risk of death or invasive infections.”

He added that because some commonly used antibiotics are “no longer effective” in treating infections from resistant bacteria, doctors have been forced to choose alternatives that could “result in complications…and more severe side-effects”.

It is for these reasons that fluoroquinolones have been banned in poultry production in the US. The drugs are also prohibited in chicken farms in Australia, Finland and Denmark.

The World Health Organisation (WHO) has been warning about the risks for 18 years.

Yet unpublished figures compiled by the British Poultry Council (BPC) – which represents around 90% of the UK industry – reveal its members have increased their use of the drugs, using 1.126 tonnes of fluoroquinolones in 2014 compared with 0.71 tonnes the previous year.

The increase suggests it is likely that at least 20 million more chickens were given a dose of the antibiotics in 2014.

The Bureau’s revelations have prompted calls for fluoroquinolones to be immediately withdrawn from use in British poultry farms. There were also calls for an urgent review of the way in which antibiotic use on UK farms in general is regulated.

Coílín Nunan, scientific adviser with the Alliance to Save Our Antibiotics, said the “shocking and alarming” 59% rise was “likely to have real consequences for human health”.

He added: “The Government should ban all use of fluoroquinolones in poultry because we know resistance is transferring from chickens to humans. This is why the US banned fluoroquinolone use in poultry a decade ago.”

Labour’s shadow environment secretary Kerry McCarthy said: “Experts have long been warning that widespread antibiotic use in farming risks undermining their effectiveness in human medicine. These figures show that more needs to be done to reduce their use, given the increase in human resistance. Government and its regulators must now act fast to put the principles of ‘responsible use’ into practice.”

Antibiotics are widely used in livestock production to prevent and treat illnesses. While farmers say their use is vital for animal welfare, critics claim the drugs are often used to mask dirty, overcrowded conditions that can encourage the spread of disease.

The US Food and Drug Administration outlawed the use of fluoroquinolones in chicken farming in 2005 after resistance to the drugs was found to be developing in campylobacter samples in poultry flocks. Officials took the unprecedented step to prevent the spread of resistant strains to humans.

Campaigners have been calling on the UK authorities to follow suit for several years.

They are also concerned about a lack of transparency about the level of usage on Britain’s farms. Although farmers are required to retain records of antibiotics administered to livestock, and vets should maintain details of antibiotic prescriptions issued, this data is not currently collated by the industry regulator, the Veterinary Medicines Directorate (VMD).

The VMD, which is an agency in the Department for Environment, Food and Rural Affairs, publishes overall sales data for veterinary antibiotics annually but not details of antibiotic usage. It means health officials have little idea of why – and in what quantities – the drugs are being used on individual farms.

In a statement to the Bureau, the VMD acknowledged current data collection around antibiotic use on farms could be improved, adding it is “a priority area of the VMD’s work on antimicrobial resistance”.

A spokesperson said: “The overuse of antibiotics in farming is a major issue worldwide, and we are working closely with countries across the world to monitor it so that we can take action. We must all work together to preserve the antibiotics that we have if we are to save modern medicine as we know it.”

There is particular concern about antibiotic resistance in campylobacter, Britain’s most common type of food poisoning. The bug infects up to 300,000 people, hospitalises 1,000 and kills around 100 each year. Contaminated poultry is blamed for four in five cases.

In serious cases, doctors frequently turn to fluoroquinolones, and in particular the antibiotic ciprofloxacin, to treat patients.

A major ECDC study that analysed human campylobacter cases in a number of EU countries from 2013 found 60% were resistant to ciprofloxacin. It also said 62% of poultry birds infected with the bug were found to be carrying the resistant strain.

ECDC chief scientist Professor Catchpole told the Bureau the link with antibiotic use in farms was clear.

Despite cautioning that most food poisoning cases were “self limiting”, with victims recovering naturally without the need for antibiotic treatment, he said that in some cases – primarily in those with compromised immune systems – the infections “can cause systemic disease with possibly fatal outcomes. In such cases, treatment with antimicrobials is required.”

“Drug-resistant bacteria have been associated with excess mortality for salmonella and with greater risk of death or invasive infections for campylobacter,” he said.

“Treating infections due to resistant bacteria is a challenge: antimicrobials commonly used are no longer effective and doctors have to choose other antimicrobials. This may delay getting the right treatment to patients and may result in complications. Also, a patient may need more care as well as alternative and more expensive antimicrobials, which may have more severe side-effects,” he added.

The British Poultry Council said it had taken a leading role in reducing usage of antibiotics, with a particular focus on those antibiotics considered to be of critical importance for human medicine.

It did not comment directly on the rise in relatively potent fluoroquinolones but said use of antibiotics in total in the poultry meat industry had declined by 30% in 2013-14.

A spokeswoman added: “The BPC and its members recognise the importance of fluoroquinolones for human medicine, and we will continue to work with our members to significantly reduce the usage of all classes of antibiotics including the fluoroquinolones.”

The industry has previously tried to tackle the issue. In 2012 poultry producers and veterinary officials agreed a voluntary ban on the routine preventative dosing of day-old chicks with fluoroquinolones. The move was in response to concerns that the drugs could help fuel the spread of antibiotic resistant bacteria.

Some leading UK poultry producers have voluntarily pledged to eliminate altogether the use of antibiotics classified as being critically important in human medicine.

2 Sisters Food Group – Britain’s largest integrated poultry company – last year announced that had not used fluoroquinolones for two years, and that macrolides, another class of antibiotic regarded as being important to humans, were also being excluded from broiler farms.

“Antibiotics are used in poultry production to treat and prevent infectious diseases and safeguard poultry health and welfare. There is a risk that antibiotic use in animal agriculture contributes to the emergence of antibiotic-resistant bacteria, which can spread to humans and make standard treatments of infectious diseases ineffective,” the company says on its website.

In December 2015, the official body set up by the UK Government to investigate the antibiotic resistance crisis, the AMR Review, called for antibiotics important for human healthcare – such as fluoroquinolones – to be restricted or even banned on farms.

Jim O’Neill, the Review’s Chairman, said in December: “Most of the scientific research provides evidence to support curtailing antibiotic use in agriculture. It’s time for policymakers to act on this. We need to radically reduce global use of antibiotics, and to do this we need world leaders to agree to an ambitious target to lower levels, along with restricting the use of antibiotics important to humans.”

Although the global antibiotic resistance crisis – which some estimates say could be responsible for 10 million extra deaths a year by 2050 –  has mainly been fuelled by the overuse of antibiotics in human healthcare, resistant forms of certain food poisoning illnesses, including campylobacter, and some variations of the superbug MRSA, are directly linked to antibiotic use on farms.

This story was produced by the Bureau of Investigative Journalism.

A version of this story was published with the The Independent.

Andrew Wasley is an investigative journalist specialising in food and farming.