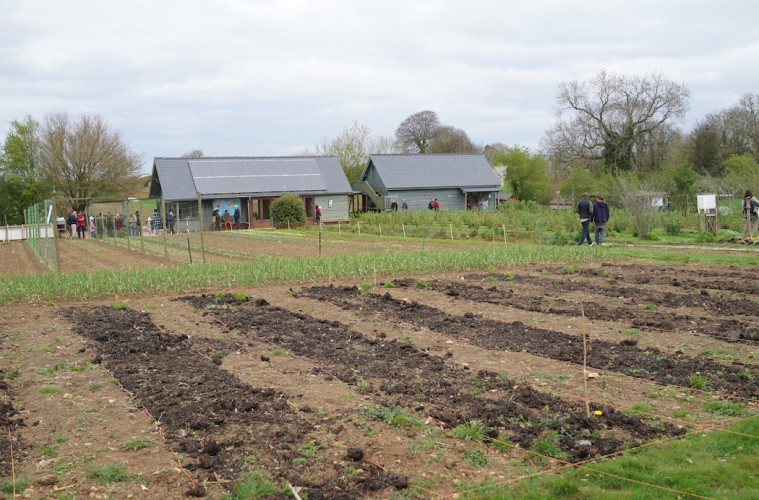 Why we need an agrarian renaissance

James Friend explores where the agrarian renaissance might come from, highlighting some of the forward thinking organisations and influencers leading the way.

Small is beautiful – and abundantly productive

The UN has been calling for a return to small-scale localised organic farming as the only way to feed the world, branding its stance in the report ‘Wake up before it is too late’ (2013). For those more connected with food production who share this innate sense that a sustainable practice is the ‘right’ way, choosing to work with natural systems rather than struggling against them seems like common sense. 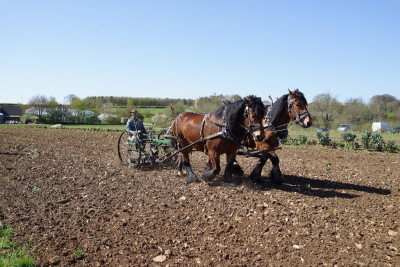 If the aim is to obtain higher yields on a limited area of land, then small scale farming should be favoured over high-tech mechanised arable farming, as low tech labour-intensive peasant farming can be higher yielding*. The latter is arguably also socially beneficial as it offers employment and a way of absorbing migratory human flows, with the potential to anchor land-working individuals within communities.

Did you know that..

-In over two-thirds of all countries, small farms – as defined in each country – represent more than 80% of all farms.

-In only nine countries, all of them in Western Europe, are small farms a minority. Similarly, the UK encourages large farms and land consolidation (and therefore loss of farmers) – which is happening at a rate of 2% a year (at this rate land will be owned by 1 person in 50 years!) **.

“the social and environmental destructiveness of large-scale, commercialised, capital-intensive farming is becoming increasingly apparent, and broad social movements are arising under the banner of food sovereignty. [For example] the Landworkers’ Alliance in the UK and La Via Campesina internationally argue for the relevance of a small-scale, locally-oriented and labour intensive agriculture to address contemporary problems” – Chris Smaje

A gathering of hope

Once a year, future-orientated farmers gather at the Oxford Real Farming Conference (ORFC) “to ask what the world really needs, and what’s possible, and to show what really can be done.” The ORFC was originally intended as an antidote to the official Oxford Farming Conference (OFC) held at the same time, not attacking the status quo but looking ahead.7Initially trialled in 2009, this year for the first time the ORFC’s attendance was actually larger than the official OFC. It is an encouraging fact and gives hope for the future, as dedicated and caring people are coming together to work towards creating resilient and affordable food systems. 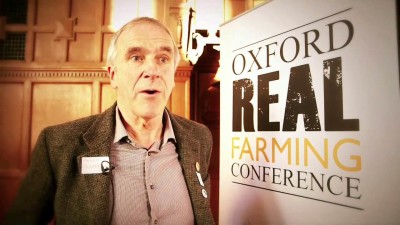 A noticeable distinction at the ORFC was the ‘down to earth’ nature of these people, whose physical appearance showed they were obviously from the land, often in boots and farmers’ caps rather than suits. It was refreshing to reflect with one another upon the state of the agrarian industry in collective solidarity, as examining the industry can be often quite alarming – for example there is an ageing population of only 150,000 farmers left in the UK with an average age of around 60.

“New social models for farming are needed, that will attract the young and groups working cooperatively to create both financially and socially successful businesses on the land.” – Funding Enlightened Agriculture

There is a real need for young people to become farmers, yet there are also some real barriers to overcome. If you are young and own land, the chances are that it was inherited. Additionally, only 3% of UK farms are held by farmers under the age of 35. Land access for new entrants is an issue*** as land prices are so high – currently around £10,000 or more an acre, up 277% in a decade (for a fascinating and informative speech on why click here).

The young are facing massive challenges, (and not receiving much assistance from the state,) so they are becoming entrepreneurial by themselves. The Groundspring Network (GSN) aims to support and connect the growing movement (pun intended) of aspiring ‘sustainable’ land workers in the early years of their careers – this includes anyone from urban veg growers, beginner beekeeping collectives, emerging dairy and meat producers. It is the grassroots brainchild of a group of energetic beginner farmers from organic and biodynamic backgrounds, who felt they did not have a space to share ideas and enthusiasm. In a practical sense they hope to signpost jobs, training opportunities and resources, but perhaps more importantly seek to create spaces to meet and share skills, resources and friendships. The GSN are self-organising and learning to farm without handouts, something which, if done correctly, can only bring long-term solidarity, profitability and success. They seek to be inclusive and cross-pollinate the camps of organic, biodynamic, agroforestry, permaculture and other agroecological approaches to unite in working towards a more resilient food system. 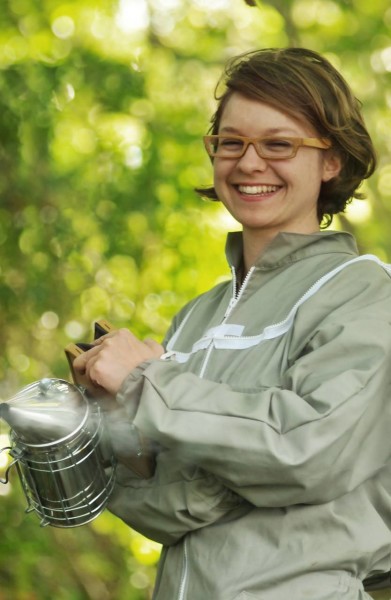 One young sustainable mover-and-shaker is Emily (28) working at Village Farm, an ambitious regenerative ‘Farm for the Future’ in the beautiful Salcombe estuary, South Devon. Emily is hosting a Food Assembly in Kingsbridge – a relatively new disruptive model originating from France which came to the UK in summer 2014. These Assemblies aim to connect consumers with producers within 150 miles, listing available products online and then having a pop-up “market day.” Customers can talk to the friendly face which has grown the food they are buying, which is arguably as good as being organically certified.

Furthermore, as everything is bought prior to collection, the producers know exactly what to bring, so there is no excess or waste. Emily began her market experience being involved with London farmer’s markets, but is now looking forward to having the shoe on the other foot; instead of the reggae and Colombian food stalls of Brixton she will now be selling her own honey from native bees in rural Devon. As well as helping to create a sense of community and supporting local business, the direct sales allow a better price for the producer (83.3% of sales) while still maintaining competitive prices for the customer.

“I look forward to gathering once a week with other food producers and supporters of what we do: when it’s been a hard week on the farm, that contact can be really energising!”

It seems the UK is beginning to take a leaf or two from North America’s burgeoning Eden of young farming movements. For example this year saw the UK’s first ever FarmHack event – a meeting bringing together innovators to demonstrate and share tools, ideas and skills.

FarmHack is one of many spin-offs from Greenhorns a grassroots network of organisers, artists, and farmers founded in 2007 in the US, whose mission is to recruit, support and promote the new generation of young farmers. They produce avant-garde programming and publications, and host events to attract and enhance the social and cultural lives of young farmers. 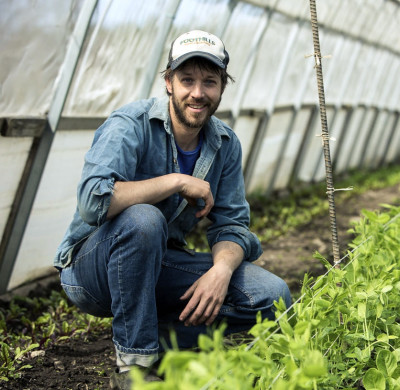 Similarly FarmStart which originated in Canada to support the next generation of ecological farmers, has now spread to the UK’s first farm incubator programme near Manchester***. One particular success of theirs has been the crowdfunding of Jean-Martin Frontier’s book ‘The Market Gardener,’ an instructional handbook which seeks to share the methodology of how he makes a six-figure salary farming 1.5 acres for 9 months a year (in Quebec!).

Aspiring young farmers are faced with major stumbling blocks such as state-inflated land prices and an economy which undervalues food. However, small-scale ecological farmers like Jean-Martin are competing financially and environmentally with the dominant industrial form of agriculture (where big business focuses on profits per hectare and externalises environmental costs).

The act of establishing small farms and distributing locally allows participation within society, while reducing dependency upon an industrialised global economy. This act of decentralising our food system has transformative power not only for food security, but for enhancing community ties and resilience. There is a growing number of enthusiastic, educated and socially aware young people, who can truly have a leading role through the once noble profession of farming. Growing sustainable food can now conceivably be a political act as well as a profitable one.

“Never underestimate that a small group of thoughtful, committed citizens can change the world; indeed, it’s the only thing that ever has.” – Margaret Mead

*For more on the issue of the ‘inverse productivity relationship’ – the notion that small farms can have higher yields per hectare than large ones – http://www.statisticsviews.com/details/feature/7553541/Three-stories-many-variables-the-case-of-small-farm-productivity.html

**‘Land capitalisation’ – the link between land consolidation and land-owners being paid a subsidy – the Single Farm Payment (SFP) was identified as early as 2008, three years after the SFP’s introduction – http://www.thelandmagazine.org.uk/articles/cap-hand