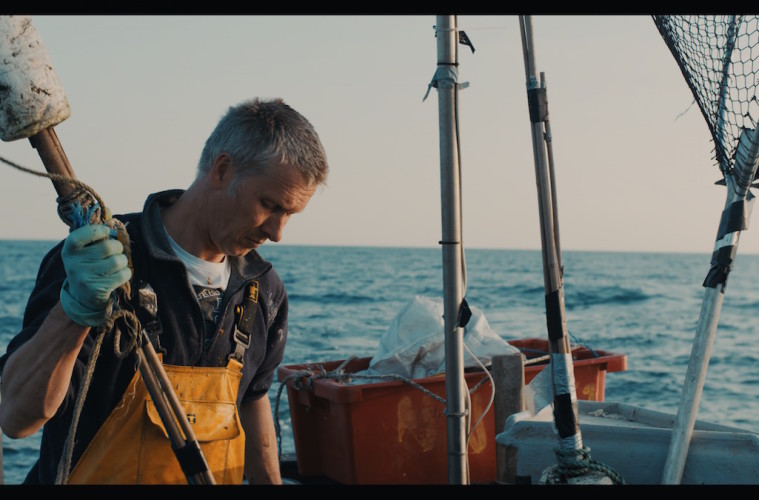 An innovative new seafood venture takes on the entire supply chain, from dock to dish, and pays fishermen above the market rate.

Indie Farmer recently interviewed Theresa Douthwright and Jack Clarke from Sole Share, a London based community supported fishery to find out more about their business and how they are supporting small-scale fishermen..

Can you tell us a bit more about what inspired you to set up a community supported fishery?

We both have backgrounds in marine conservation and sustainability. We wanted to give Londoners access to high quality, sustainably caught seafood. We also wanted to supply it in a way that supported the small-scale fishermen that catch it. These models have been growing in popularity in North America for the past decade and we thought we try and replicate it in London. 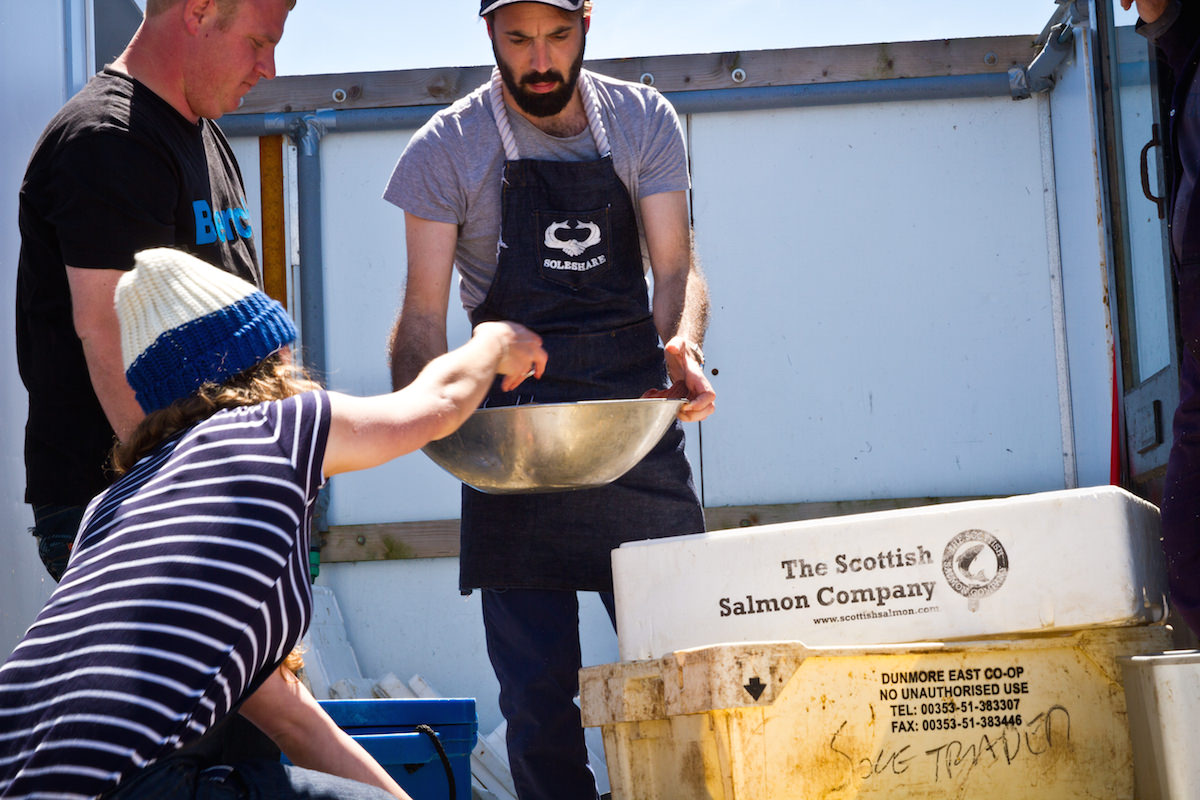 Theresa and Jack picking up some fish. Photo Sole Share

How did you go about sourcing sustainably caught fish and building relationships with small-scale fishermen?

Before SoleShare, Jack helped set up Catchbox, a similar project in Brighton. It’s a community co-operative, run by local volunteers. He’d met a fisherman called Martin Fuller through that and we got him on board to supply our first season. Since then we’ve started working with a fishing family in Dungeness and a small fishing co-op in Newlyn too.

We set up SoleShare to buy the fish that’s being caught by fishermen, rather than dictating what we want. By working closely with them, we’ve tweaked the way we operate and developed really good relationships over the past few years. As we buy direct, we pay them a lot more for their fish too- on average, over five times as much. That probably helps!

What did you make of our latest story on the plight of small-scale fishermen in Hastings – are your fishermen facing the same challenges and are they feeling optimistic about the future?

I’m not sure if there are many optimistic small scale fishermen. It’s odd, because fishing is inherently optimistic- if you didn’t think you’d catch anything, you’d stay at home! Sadly, while their methods are some of the most environmentally sustainable around, their way of life is far from financially sustainable. Lack of quota, low prices at the dock and a deterioration of onshore infrastructure mean it’s an uphill struggle for many of them. The average age of an inshore fisherman is in the 50s and there’s virtually no one entering the industry these days.

What I find infuriating is the way quota’s shared out between British boats. Inshore fishermen make up 65% of the fleet, but only get 4% of the quota. I’ve been to a lot of meetings in Europe, trying to raise the concerns of inshore fishermen. It’s the same story in most EU countries- the rights of small scale fishermen, who have often fished on the same patch for generations, are being trampled by the larger, industrialised fleets.

In January this year, changes to the Common Fisheries Policy- the EU framework that governs the way we fish- have ordered the redistribution of quota in a more equitable way. One that rewards small-scale, low impact fishermen with a bigger piece of the pie. Sadly, by the time they actually bring it into effect, we’ll have lost hundreds of fishermen.

With farm produce prices at rock bottom across the board, many entrepreneurial farmers are turning to alternative enterprises to bring in other income streams – from brewing craft beer, using their farm as a film location, running courses or glamping – what are the options available to fishermen to bring in other incomes or are they solely reliant on the amount of fish they can catch and the ‘market’ price?

You often read articles where the writers suggest fishermen could always start doing ‘tourist trips’ or ‘helping with research’. The assumption that they have a boat and are willing to switch jobs for some quick cash is pretty patronising. It’s not like the fishermen in Hull or Grimsby have now all got jobs taking tourists on pleasure cruises. They’re on the dole. And their towns are crumbling.

While all industries need to adapt to modern pressures, it’s vital that our coastal communities aren’t just thrown to the dogs in the ceremony of progress. Both from a cultural perspective and one of pure economics. There are a lot of fishermen trying new models for marketing their catch. Dreckly Fish, who we work with started out auctioning their lobsters on twitter and now work as a fishing co-op. 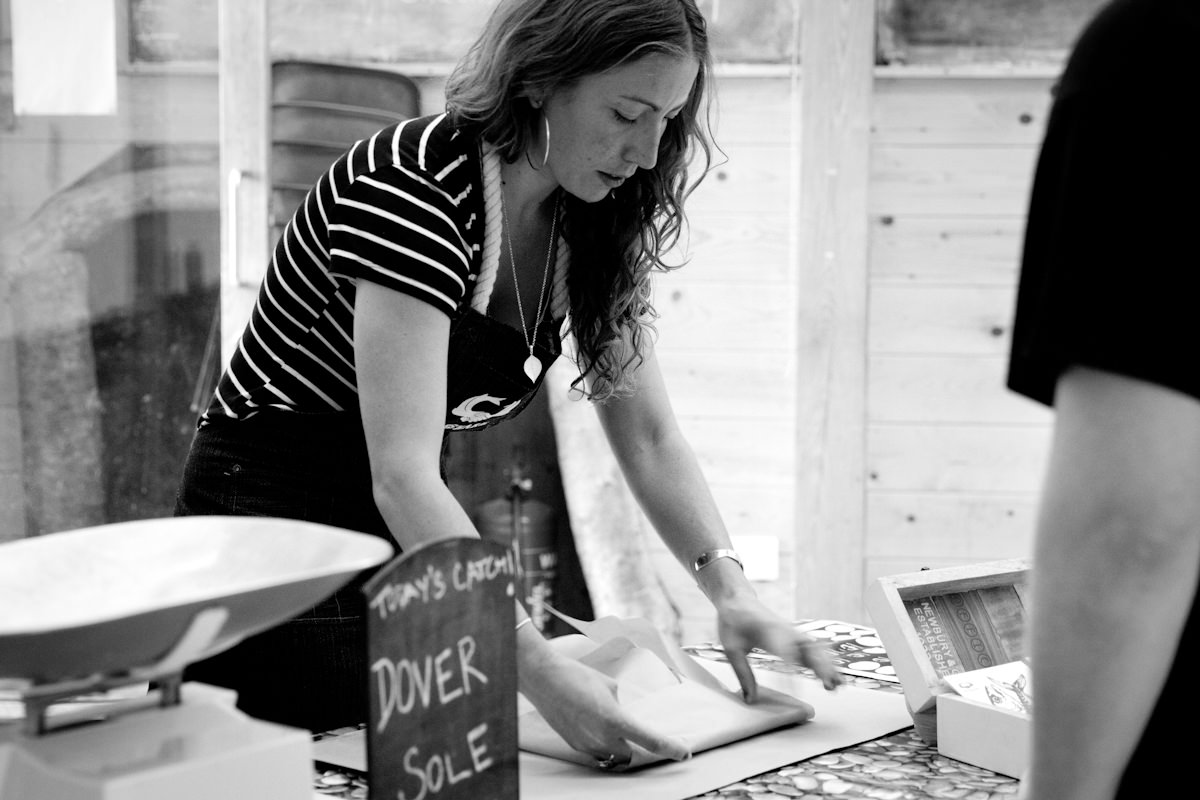 We love the name SoleShare – how important is the branding and marketing to the growth of your business?

It took us ages to find a name we were both happy with. We spent weeks weeding out bad pun after bad pun (and when it comes to fish there are plenty!) and to be honest we came up with it four pints deep into the pub.

While I don’t think anyone would sign up just because they like our logo, it certainly helps get your name out there. The same goes for websites, while we’re an ethical food business with strong values at the heart of what we do, we didn’t want to come across too worthy. If we’re going to normalise alternative food models, we need to make them work in the 21st century and fit into increasingly hectic lives.

How fresh is the fish that your members receive and does the quantity and type of fish vary from week to week?

You’d be hard pressed to find fresher in London. The fish our members get each week has normally been caught that day, or the day before. We’ve served fish that’s still twitching before, which makes it tricky to wrap!

Members choose how much they want, from half a kilo (dinner for two) upwards. Sometimes, we’ll have a bumper haul and everyone gets a bit extra, but occasionally, when fishing’s been poor, you might be a little underweight.

The species vary a lot. Occasionally we’ll just a haul of mackerel, the most we’ve had is 13 different species. We try to make sure that there’s a good variety of fish, as that’s what most of our members enjoy.

Do you see the supermarkets as competitors? What are your main marketing channels to build up your members?

No, not in the slightest. We’d be mad to compete with supermarkets on price; they’ve been driving down prices at farm gates and harbours for decades. We pay our fishermen way above the market rate for their fish and take on the entire supply chain, from dock to dish.

Saying that, the ubiquity of supermarkets is quite helpful. A lot of our new members have only really eaten fish from the supermarket before and the difference in quality between theirs and ours is unbelievable. One look at our fish and it sells itself.

Do you believe this model can be applied to other cities and areas of the UK?

Yes, certainly. We’ve helped people set up similar models in Sweden, France and Belgium. There’s definitely room for more in the UK- if you’re interested in setting one up where you live, get in touch!

We recently attended the CSA Network UK annual gathering and one of the issues raised was why the CSA model hasn’t really ‘caught’ on in more urban areas like London? Do you think there are opportunities for more CSA’s?

We were lucky enough to go to California last year on a research trip. In the states, the food in the supermarkets is so bad, that if you want to buy decent, flavourful, or organic food, your only option is a farmers market or CSA scheme. It’s been that way for a generation almost. It’s an entirely normalised part of the shopping experience.

Supermarkets in Britain are much better, even the worst offenders sell British organic produce and you can find high welfare meat in most of them. Also, most shoppers who care about their food try to support local fishmongers, butchers and greengrocers, and rightly so. It’s not so black and white as it is in the USA.

I’d love to see more of them in London, but you need carrying capacity- enough people signing up to make it worth while for the farmer. Hopefully new models like Farm Drop make it easier for farmers to access the London market.

That’s interesting – there was also a lot of discussion around CSA’s being more efficient in terms of minimising food waste too – do you agree?

Definitely, half the fish that’s stocked in shops is thrown away. We wanted to design a model that was as sustainable as possible and of course that means not wasting animals that have been killed for our pleasure. The great thing about CSA/CSF schemes is there’s no guesswork, you know how much produce you need each week. Any leftovers get given to the hosts at our collection hubs, we hardly throw anything away. 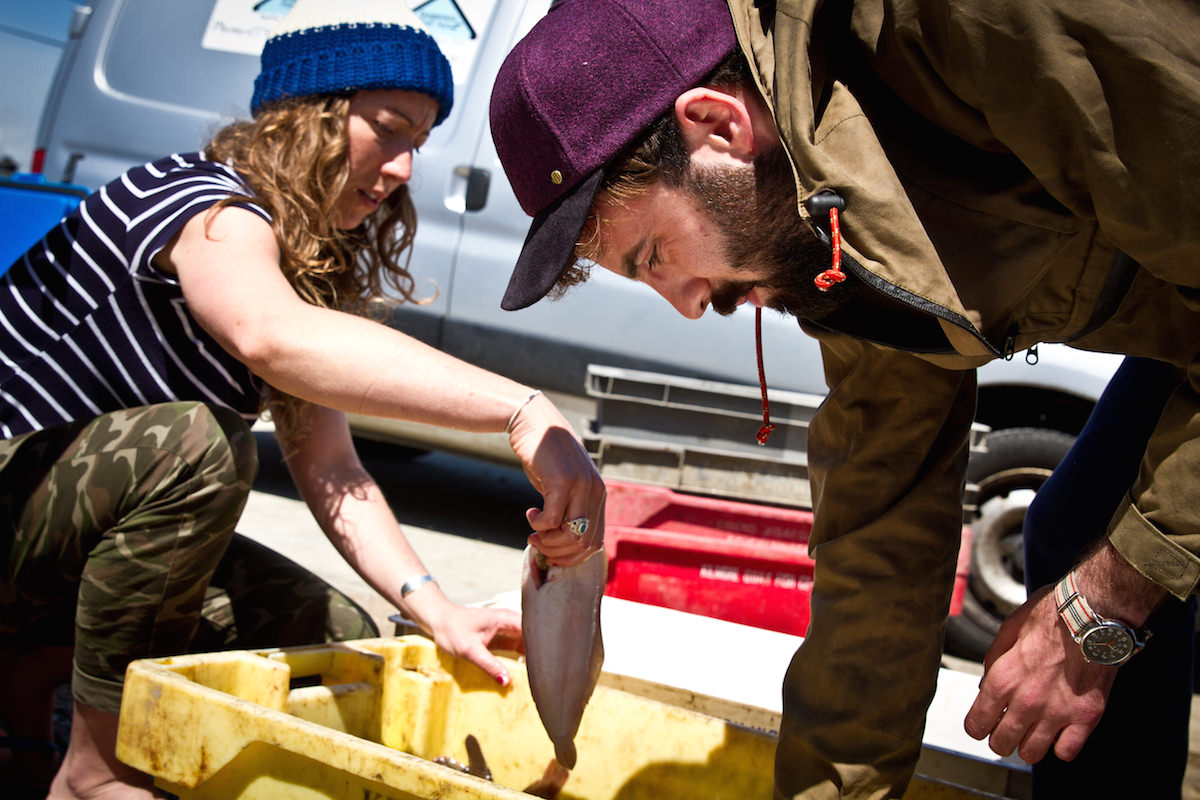 Theresa and Jack inspecting the catch of the day. Photo Sole Share

How important is education and trying to teach more people to eat what’s in season?

We supply fish, but I’d say we actually spend more time on the education/communication side of things. Not just in terms of eating with the seasons, but basic skills and techniques in cooking and preparing fish.

Almost all our fish comes whole, which puts some people off. We provide simple recipes every week, showing our members how to cook a delicious dinner with some basic storecupboard ingredients. Our website has a page for every fish we might give you, with background info, videos, tips and recipes and we run fish prep workshops throughout the year.

If we want people to start eating properly, then we need to teach them not only how to cook, but where food comes from.

What’s next on the horizon? Where do you see yourself in 5 years from here?

It’s important we grow organically, taking on more fishermen as we expand. We certainly wouldn’t want to cut corners to make a quick buck, that’s no good in the long run. We’re focusing on consolidating our corner of East/North London for the time being, we’ve got a lot of new hubs in the pipeline.

We’ve been working with more and more restaurants too and this is an avenue we’re keen to pursue. Hopefully in five years we’ll have a few fishermen fully integrated into SoleShare, where we can buy everything they catch, every day of the week and hand it out to members all over the city.

And lastly – do you have any favourite fish recipes and how can people sign up?

I really like recipes that elevate humble fish to new realms. There’s a Japanese cured mackerel dish called shime saba that really is incredible. If you didn’t get the fish from us, or catch it yourself, go a to a proper fishmonger. Supermarket mackerel won’t cut it. For the shime saba recipe click here

Signing up is easy. Go to www.soleshare.net/signup. Simply choose how much fish you’d like, how often you’d like it and where you’d like to collect it from. You pay monthly, via direct debit according to your share size. For half a kilo every fortnight it’s only £18.