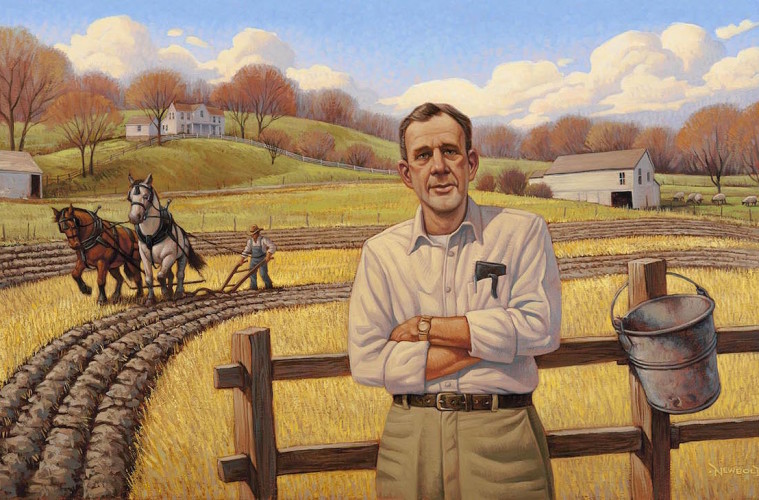 ​A couple of months ago I wrote about how I got interested in agricultural philosophy and the ideas behind decisions about farming models. A couple of people suggested that I do some research into Wendell Berry, a man I had vaguely heard of, but really knew nothing about. For those of us who like labels, his name is associated with ‘agrarianism”, a philosophy that puts our human ties to each other, to other living things and to the land first. Here I will try and explain some of his key ideas, particularly in relation to farming.

​Berry was born in 1934 in Kentucky, North America, and he is a prolific writer, poet and ‘philosopher farmer’ whose work ranges widely over farming and ecology issues, but whose name seems to be little known in the UK. He came from a farming background in Kentucky, and grew up on a farm, though his father also practised law. He studied English at university in Kentucky and at Stanford near San Francisco, then lived in Europe with his wife and young children before settling, in 1965, on a small, challenging farm neighbouring the family farm that his brother ran back in Kentucky.

​Though Berry could have remained in cities, writing and teaching, the countryside of his childhood pulled him back. In 1973 he told an interviewer that he thought the biggest voices in American culture were ‘mainly embarrassed about country things’, and farmers were given no models or vision to aspire to. Berry decided that he was going to be a voice for small farmers, not least because as he explained to the same interviewer he felt that they were ‘pretty well understaffed with advocates’. In doing so he has explained that he felt that he was taking up a family tradition dating back many years to an incident in his family that had gone down in its history. In the Jefferson lecture of 2012 Berry tells the story of how in 1907 his grandfather sent his tobacco crop off as usual for sale; the next day after attending the sale in the local town, he returned without a penny. The American Tobacco Company, which  held a monopoly, had made its payment-this barely covered the costs of transport of the crop and the family endured financial  hardship for the whole of the following year.

​That family history has influenced Berry’s ideas about farming throughout his career. In 1974 he gave a speech at a symposium on agriculture that led to his controversial work, The Unsettling of America . In this speech he contrasted the small farming he grew up with in the 1930s and 1940s, (when many farmers were near self-sufficient, and what shopping they did took place at local fresh food markets) to the agricultural model then being pushed on farmers by the representatives of agribusiness and government. These modernising forces with their unsubtle slogan of ‘get big or get out’ were decimating the small agricultural businesses of his childhood in the name of economic efficiency. But for Berry they were acting with ‘monstrous ignorance and irresponsibility’,  driving farmers off their land and killing communities in their ‘monomania of bigness’ (quotes taken from his lecture at the symposium).

​In Berry’s view agribusiness does not offer a good deal for anyone except possibly its investors. His abiding belief is that everyone’s lives ‘must still come from the ground’ (Plowboy interview 1973),  that ‘no matter how urban our life, our bodies live by farming; we come from the earth and we return to it’ . Therefore, specifically, all of us need to value or look after soil  as our means of survival. But agribusiness is an agricultural model that tends to be driven by the goal of maximising quantitative output on land (eg milk per cow, crop per hectare, weight of carcase in shortest time)- it rarely mentions sustainability. Sustainability means preserving the quality of the soil, the health of the animals, the purity of the air and water on the land and the quality of the food produced in its system. As Berry reminds us, agribusiness managers will simply move on once the land is depleted.

​But farming is emphatically not, in Berry’s view, comparable to mining. Rather, it is a long-term project best carried out by people who make a commitment to one place,  hand down knowledge over the generations and put sustainability of the farming practices on their land above quick profit. He associates this attitude to farming with family farms, rather than businesses owning large tracts of land and farming through contractors. And by choosing to work a farm alongside his writing career, he explains that he hoped to put into practice some of the values he associated with that farming way of life.

​Berry’s own commitment to farming is therefore driven by a whole complex range of reasons. He keeps returning in Agrarian Essays (as well as his fiction works) to the idea that the small farming businesses of old rural Kentucky were self-sustaining household economies. People in them were self-reliant and independent, they ate healthy food, benefited from outdoor work and the women worked as well as men and were equally valued as part of the family business. He contrasts their way of life with those of people today, questioning the value of urban/suburban sprawl, factory farming and food production, giant anonymous retailers, wage slave economies and relentless competition.

​But, interestingly, when challenged by an interviewer in 1993, Berry was not sentimental about these past farming communities ; rather, he stressed how his ideas gave him a vision for a better future for all of us. Asked for his advice back in 1983 about how people can improve their lives he emphasised the benefits of community, staying in one place, and living as part of the greater world of nature. But those who wish to live in the country may find it easiest to do so by supporting any farming enterprise with other work (as he himself has done). And those who prefer cities can find a connection with farmers and country life through the way they eat and buy food. He stresses the symbiotic relationship between consumers and farmers: whilst farmers have a duty to produce food responsibly, city people need to eat responsibly (The Art of Living Right). They can go to farmers’ markets, avoid factory- farmed and produced food and if they are really interested think about growing their own vegetables.

​In this short account I have only considered Berry’s ideas about farming. He is also fascinating on what ‘place’ means to us, on ecology and biodiversity, on gender issues, science, education and global economics. Though he gave the prestigious Jefferson lecture in 2012 and is admired and read by a lot of people especially in the US, he remains a little bit of an outsider.  I think he confuses people because he is both deeply radical and yet in some ways conservative: he can be outspoken; he has not been a big fan of digital technology, and he is a practising Christian. But for anyone like me who is interested in ideas about farming and food, and the ‘bigger picture’ of where we are heading with our agricultural practices, I would absolutely recommend reading and listening to his work. He writes so clearly and decisively, and pinpoints cultural conventions so exactly, that he simply makes you think harder and see things afresh.

Thanks to the Artist Greg Newbold who kindly granted Indie Farmer permission to use his painting titled ‘Beckoning the Peace of Wild Things’ taken from the Wendell poem of the same name.

We will be doing a follow up feature interview with Greg and the influence of his rural farming experiences growing up on his work but in the meantime you can find out more at www.gregnewbold.com or follow his blog at www.gregnewbold.blogspot.com.

-I suggest you start by listening to the Jefferson Lecture online (see reference 2).

-Agrarian Essays (reference 4) gives a good overview of Berry’s ideas and their development over the years. The Editor, Norman Wirzba, also writes short interesting introductions to each section which sum up what the philosophy of ‘agrarianism’ means.

-Berry has written novels and many short stories, several based in a fictionalised Kentucky town, which evoke the small farming world. His poems express his more idealised vision.

-For a sense of the political/idealistic drive behind the revival since the 1970s of small farms, organic farming and ecology listen to his 1974 lecture (reference 3 below).

3. Lecture given by Wendell Berry at the Agriculture for a Small Planet symposium, Gonzaga, Spokane, on 1 July 1974 and available online: https://www.youtube.com/watch?v=t1tioiBrZRE.

4. Wendell Berry, ‘The Body and the Earth’ 1977, collected in Agrarian Essays, The Art of the Commonplace, Ed. Norman Wirzba (Berkeley, Counterpoint, 2002) (‘Agrarian Essays’).

6. Gregory McNamee and James R. Hepworth, ‘The Art of Living Right: An Interview with Wendell Berry’ in Conversations.