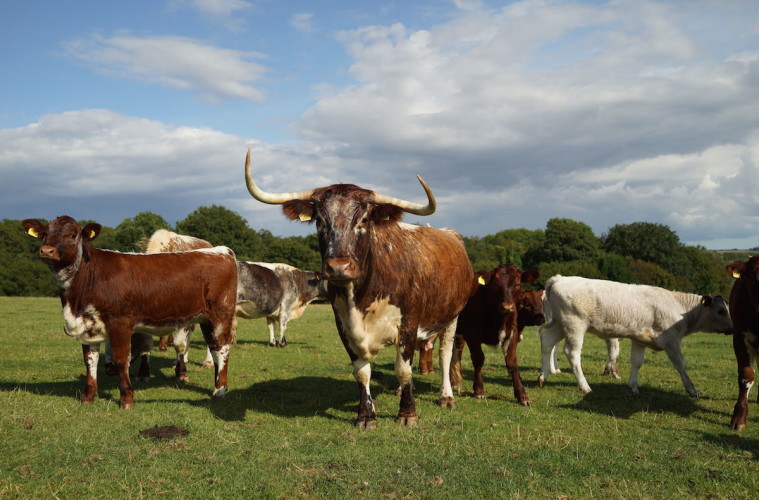 To the casual observer, a sheep is simply a white wooly thing that you occasionally glimpse in the fields as you drive past, a pig is a fat pink animal that snorts and snuffles and ends up as a bacon sandwich, and a cow is a big black and white beast that eats grass and produces milk. But the generic cows, pigs, sheep and chickens of kids story books hide a huge diversity of shapes, colours, behaviours and characteristics that makes Britain’s farming heritage unique in the world.

Take a close look at some of the herds and flocks to be found around the country and you will be amazed by the sheer diversity amongst the farm animals of this island. 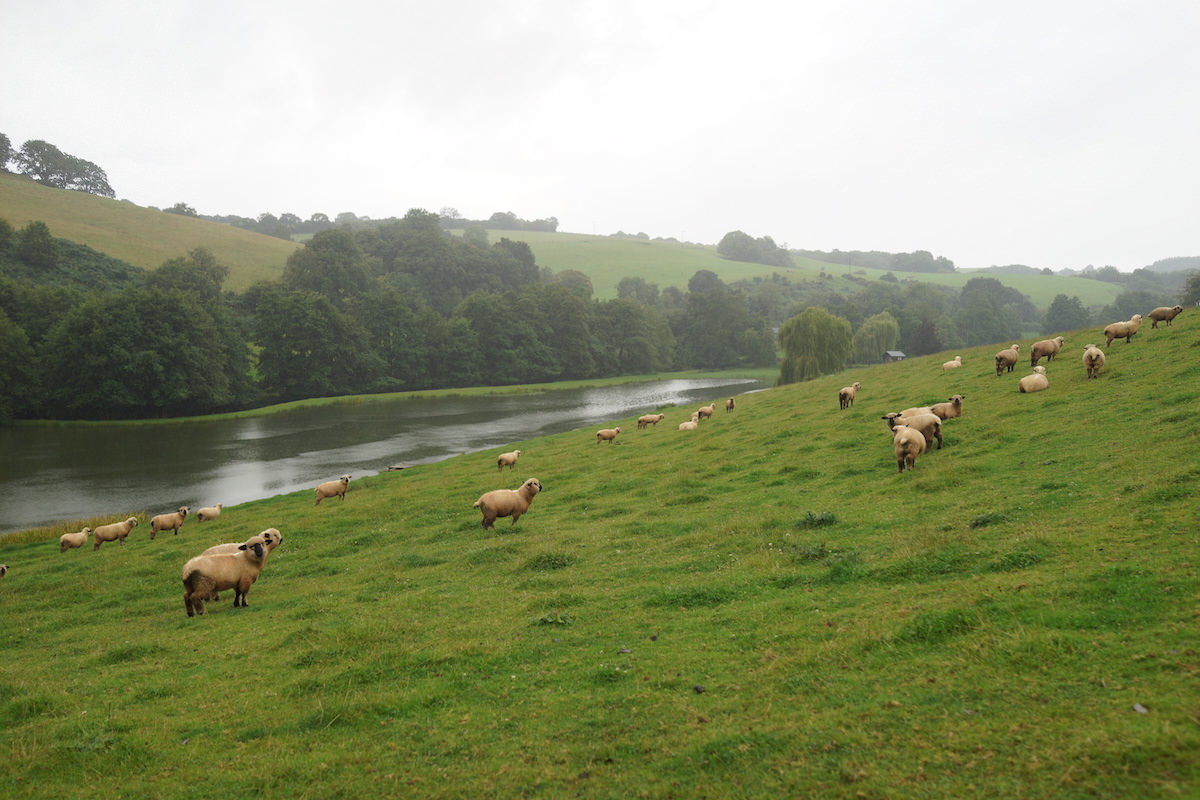 Hampshire Down Lambs grazing at Stream Farm in Somerset

Over hundreds of years, selective breeding and careful husbandry by shepherds and farmers in different parts of the country has produced a huge range of different sheep, cattle, pigs and chickens. The differences between a Soay and Suffolk sheep, or a White Park and a Guernsey cow, are as big as the differences between a Great Dane and a Chihuahua. Because Britain has a large range of different agricultural and climatic conditions, from the Highlands of Scotland to the South Downs, and because the techniques of selective breeding were adopted early, we have the greatest number of native breeds of sheep and cattle in the world, each one unique and useful in its own way. There are estimated to be 80 breeds of sheep in the UK, 60 of them native, 35 breeds of cattle and 14 pig breeds. Unfortunately, many of these unique breeds are kept by only a few farmers and smallholders in particular parts of the country, and are classed as rare breeds whose survival is in danger. 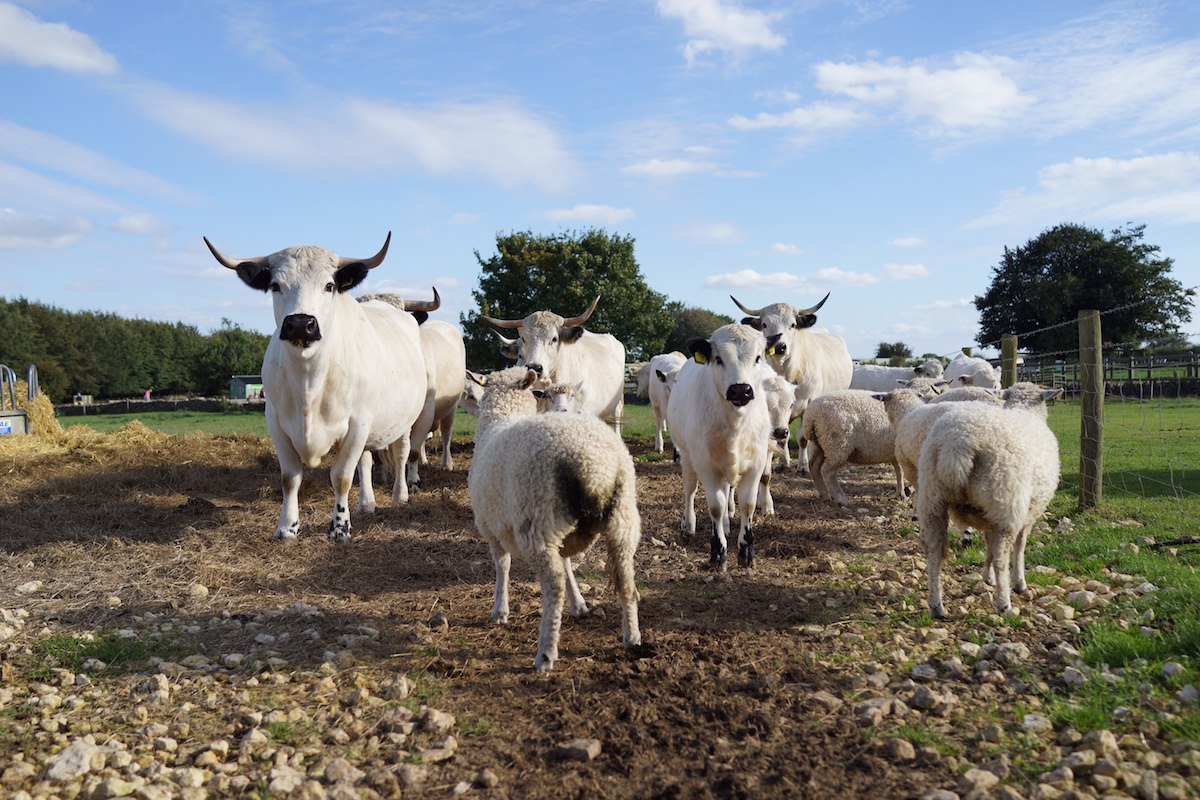 The relevance of rare breeds to modern British agriculture is an issue that divides opinion amongst farmers. Some see them as throwbacks to a bygone age, relics of the past that are not suited to contemporary farming methods and are best left to quietly die out and be replaced by more modern, efficient breeds. There are others, however, enthusiasts, traditionalists, or just farmers who see a value in a particular rare breed, who work hard to keep herds or flocks of these rare animals and who would like to see them survive and thrive into the future. Both sides of the argument have some valid points, after all farmers do have to make money, they cannot maintain animals that have no economic value, and the history of agriculture is one of progressive selective breeding and improvement of stock. But when these rare breeds disappear we lose a potentially vital genetic resource, the product of hundreds of years of careful breeding that cannot be recreated. A particular breed may seem unfashionable and old fashioned now, but who knows what conditions will prevail in the future, what breeds will thrive as agriculture changes, as it must, over the next decades.

“When these rare breeds disappear we lose a potentially vital genetic resource, the product of hundreds of years of careful breeding that cannot be recreated”

A good example of this is the Lleyn sheep, 15 years ago a rare breed confined to the mountains of the Lleyn peninsula in North Wales. Through the 1980’s and 90’s, sheep farmers in England had been using breeds which needed relatively high inputs in terms of feed and labour at lambing time, using Mules (a mountain sheep crossed with a longwool breed) and Suffolk Rams. With shifts in the prices of inputs, labour and the finished product, lamb, farmers started looking for a good maternal sheep that would do well on low input grass based systems, and the Lleyn fitted the bill perfectly. Today Lleyns can be found throughout the UK, and are the fastest growing breed in the country.

Rare breeds have also been used to create new, modern breeds suited to conditions today. With the low price of wool, many farmers are paying more to have their sheep shorn than they gain from selling the wool. Iolo Owen, an Anglesey farmer, crossed some Wiltshire Horn Rams with his Welsh Mountain ewes, and created a new breed called the ‘Easycare’ which naturally sheds its wool and does not need shearing. The Easycare is becoming popular here and abroad. Who knows what other characteristics will be useful in the future? The North Ronaldsay, which has evolved to subsist entirely on seaweed, will probably not become common throughout the country, but what an amazing adaptation to a harsh island environment! Similarly, the Whitefaced Dartmoor or the Romney Marsh are perfectly adapted to their particular environments. 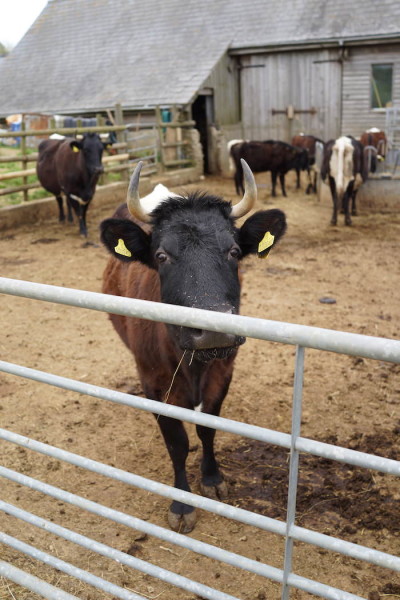 “There are only 400 Gloucester cows left, so the future of the breed, and of the delicious Double Gloucester cheese, is in danger.”

Reasons for breeds becoming rare include them being confined to a small geographical area, or the fact that they are often generalists, animals like the Gloucester cow, which gives a bit of milk and is OK for beef, but is not really good at any one thing. In the increasingly specialised world of modern farming, general purpose breeds do not fit in. Rare breeds are also often smaller, slower growing, or in the case of pigs, too fat for modern tastes. But for consumers, these traits can be an advantage. Slower grown, primarily grass-fed animals with a good layer of fat have a vastly superior flavor and texture than the faster grown continental type beef and lamb breeds. And that is not just wishful thinking! Again and again British native cattle steaks have been selected by chefs as the tastiest in blind taste tests. I highly rate the meat from Jacob sheep, which I keep alongside my commercial flock. The meat is darker and more marbled, and has a rich, complex, almost gamey flavour. Unfortunately the buyers at the local livestock market, who buy for big suppliers, prefer larger sheep with a different body shape , and my Jacobs don’t often fetch what I think they’re worth! 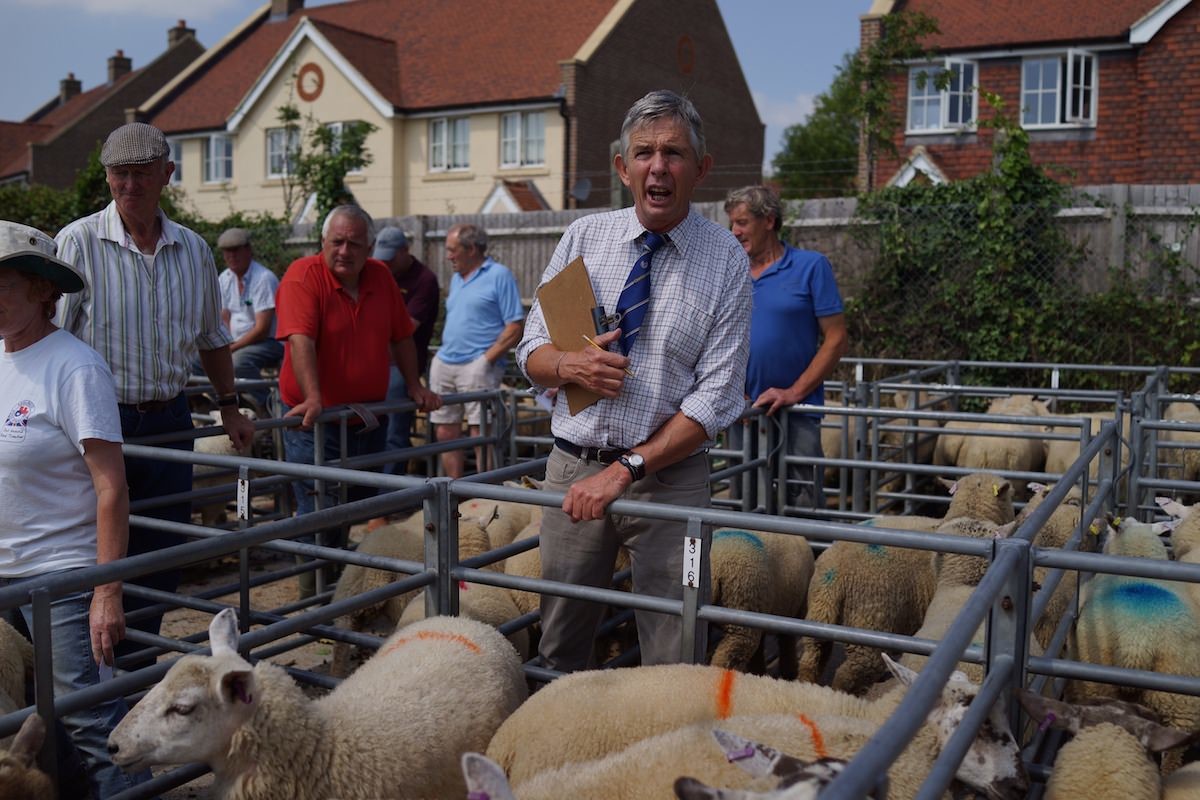 And that illustrates the danger to rare breeds. As profit margins get tighter, the animals that don’t pay their way are the first to go. This can be most clearly seen in the dairy industry, where 95% of the national herd is made up of black and white Holsteins. There are only 400 Gloucester cows left, so the future of the breed, and of the delicious Double Gloucester cheese, is in danger.

The Rare Breeds Survival Trust is a charity that promotes rare breeds and campaigns to save them, and it has done a good job in rescuing many from the brink of extinction. But it is a continuous battle, and many have become extinct, such as the amazing Lincolnshire Curly Coated pig, the Sheeted Somerset cow and the Berkshire Knot sheep. It may seem counter-intuitive, but the best way to save these rare breeds is to eat them! If there is a market for the produce, farmers will keep them, and the breed will survive. So search out some sausages, a leg of lamb or some steaks from a rare breed, and enjoy your meal!