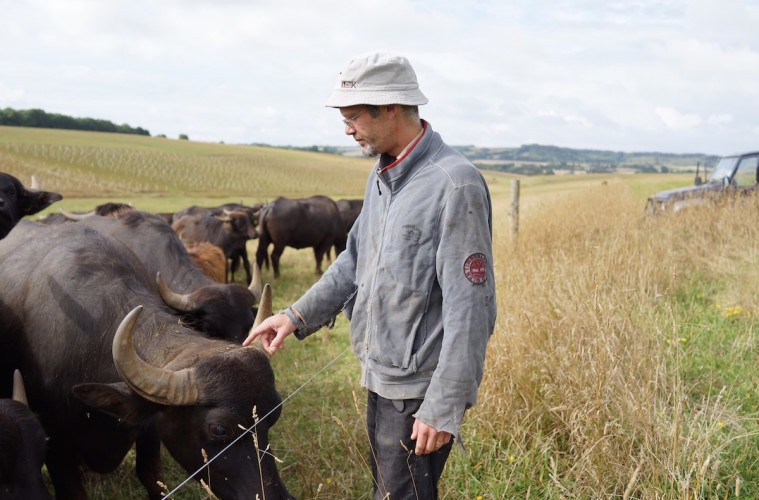 Leaving Kent I made a bee-line for Winchelsea in East Sussex to visit Mason Palmer at Wickham Manor Farm, a 750 acre National Trust farm and home to the Charles Palmer Vineyard. When I arrived I was greeted by a man in high vis jacket quizzing me on my identity as they had a film crew onsite filming! 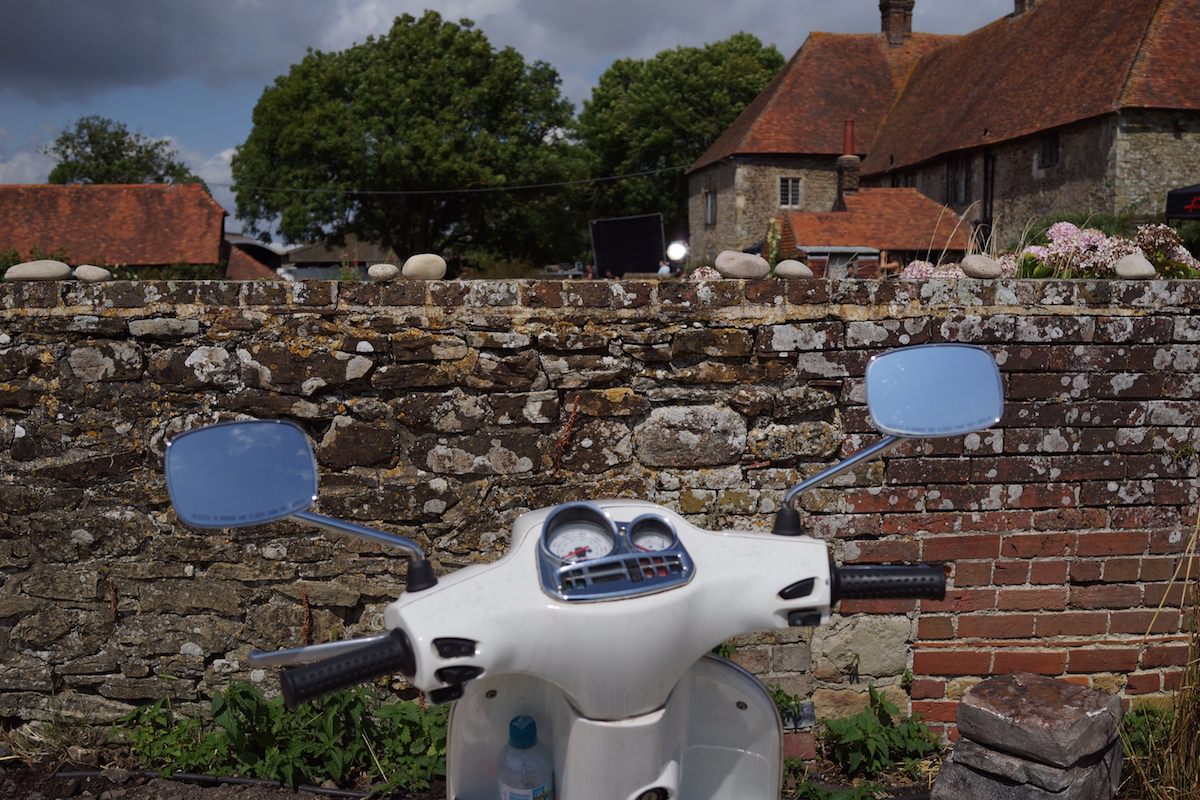 Mason showing me around the farm and their 5 acre vineyard accompanied by Harry his rather photogenic Paterdale Terrier. 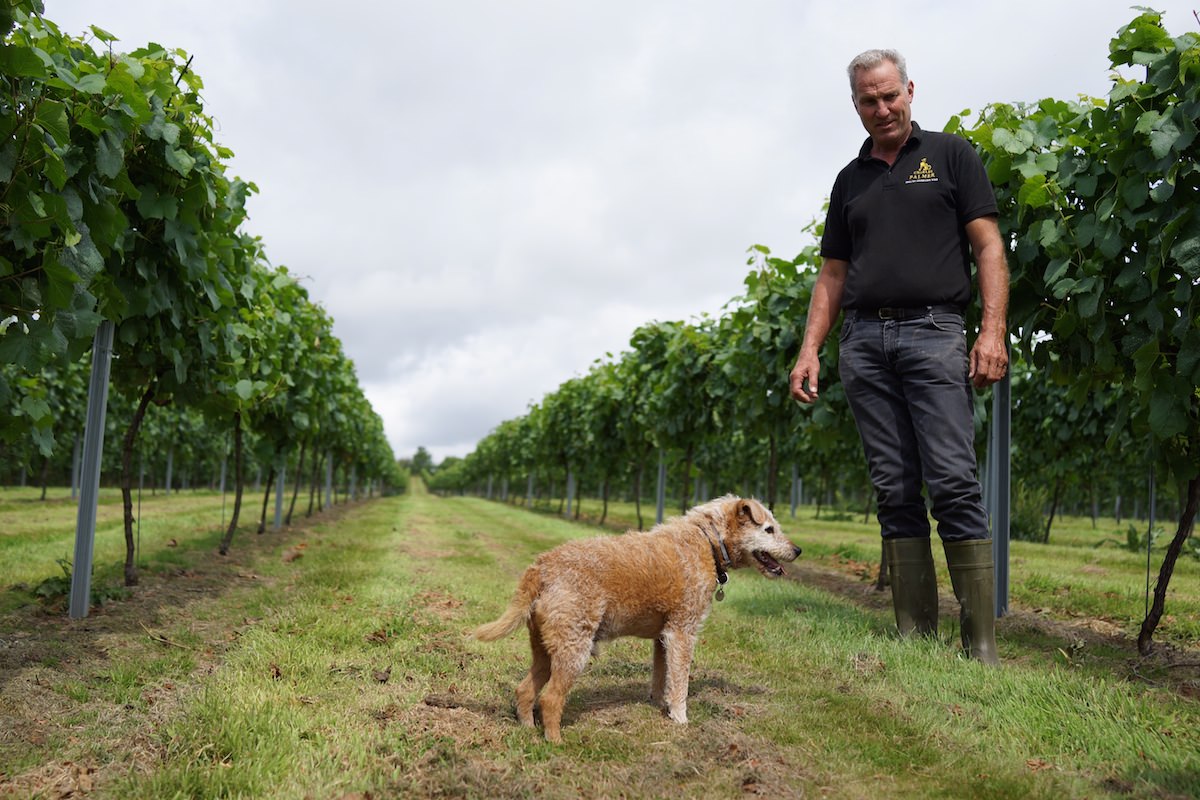 The main revenue streams for the farm comes from their flock of sheep and arable operation. Talking to Mason about the economics of wine making it was interesting to learn that it costs around £8000.00 to plant an acre of vines and can take 2-3 years before you can harvest a crop of grapes – meaning it takes a good numbers of years before you realise a return on your investment. 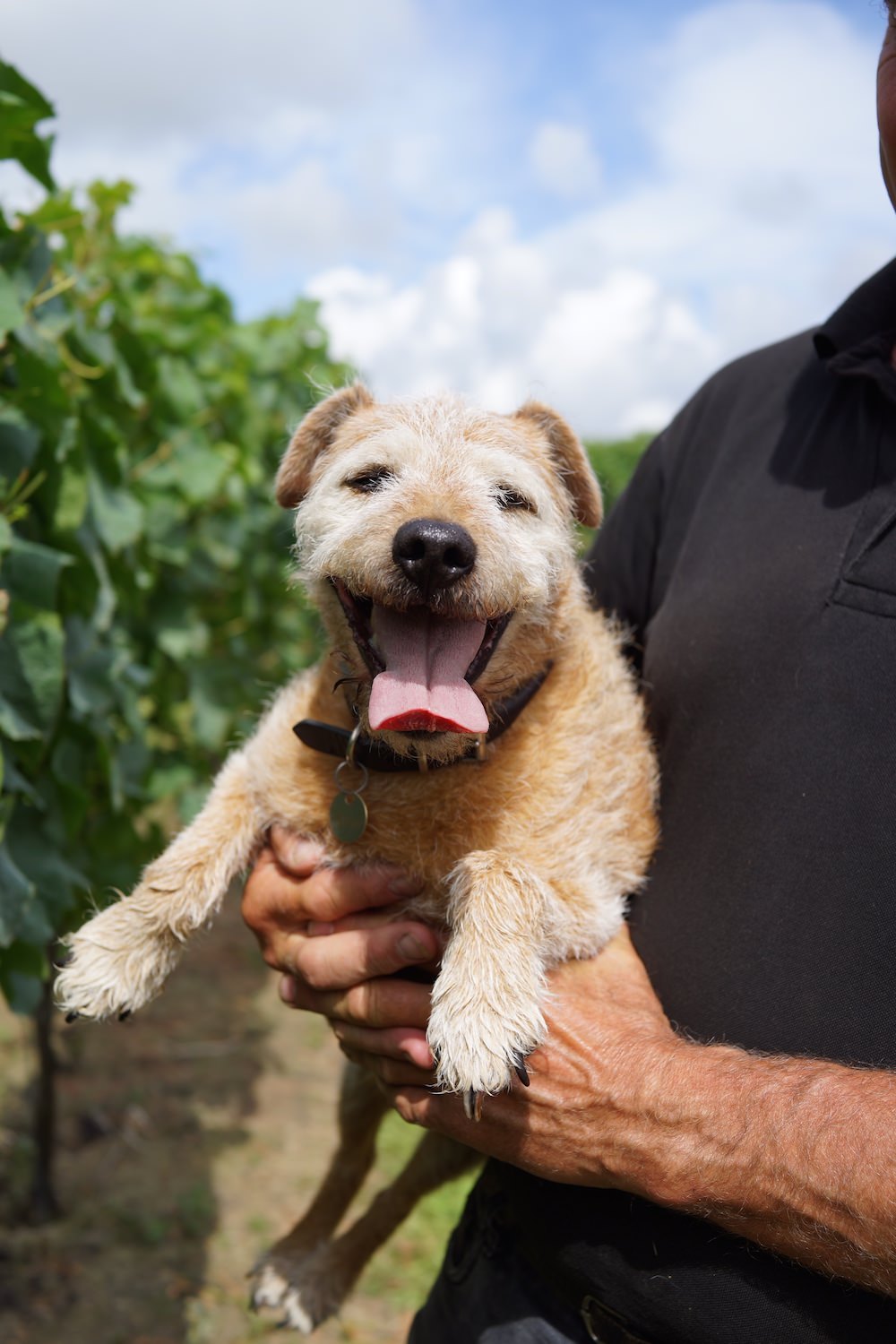 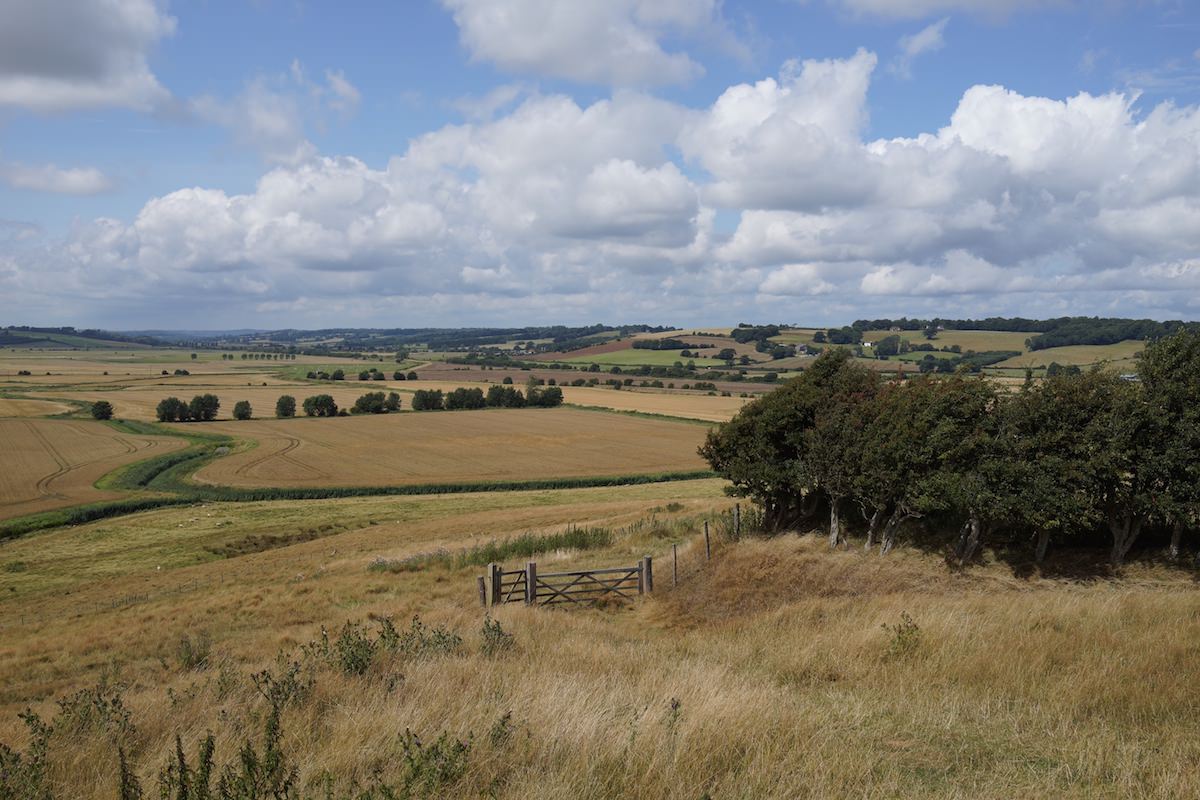 I got to try some of their 2009 Brut which was very well received by the sparkling wine community (myself included)! 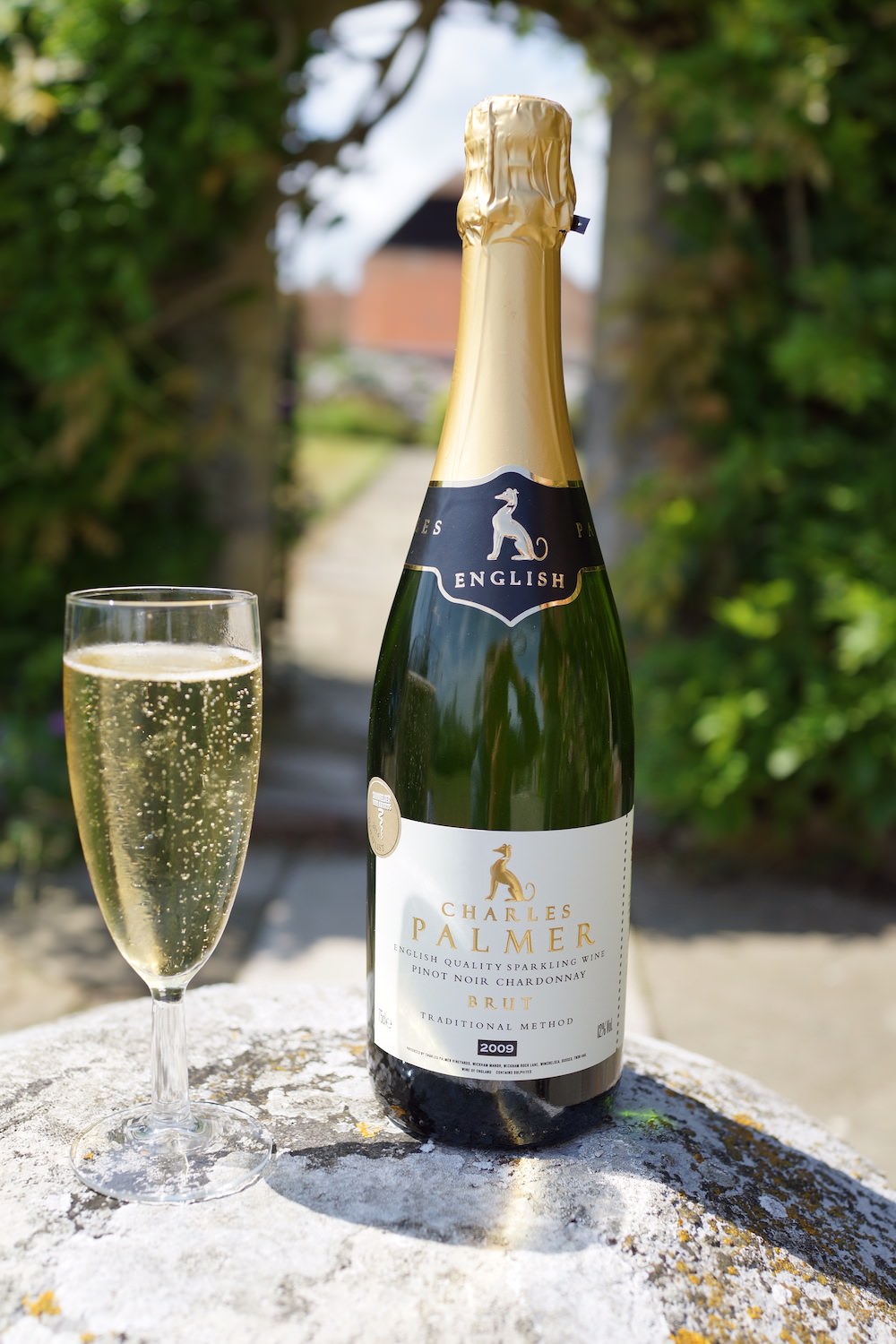 Next stop – Henners Vineyard down the road in my home village of Herstmonceux where I met winemaker Ben Murray. Ben kindly showed me around the vineyard and winery accompanied by his dog Rose.. 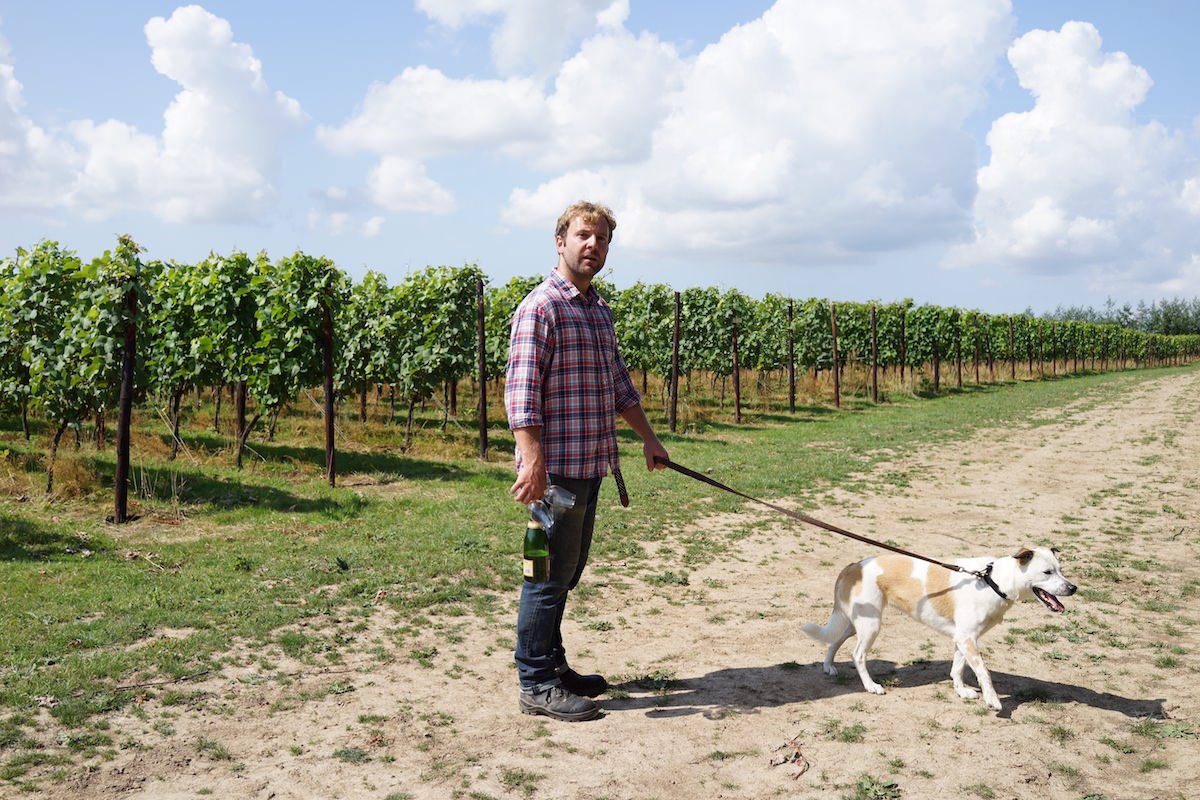 They have around 10 acres of vines and hope to harvest around 40,000 tonnes of grapes this year which once pressed will produce around 30,000 bottles. 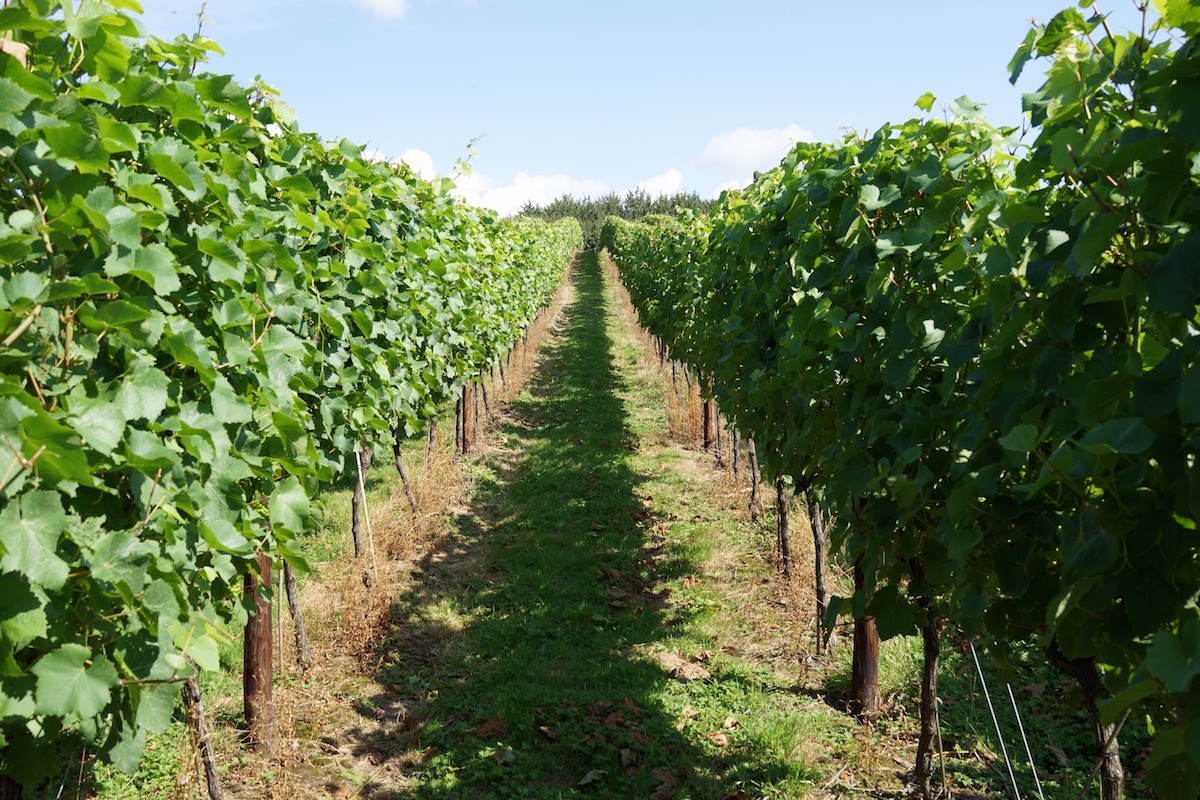 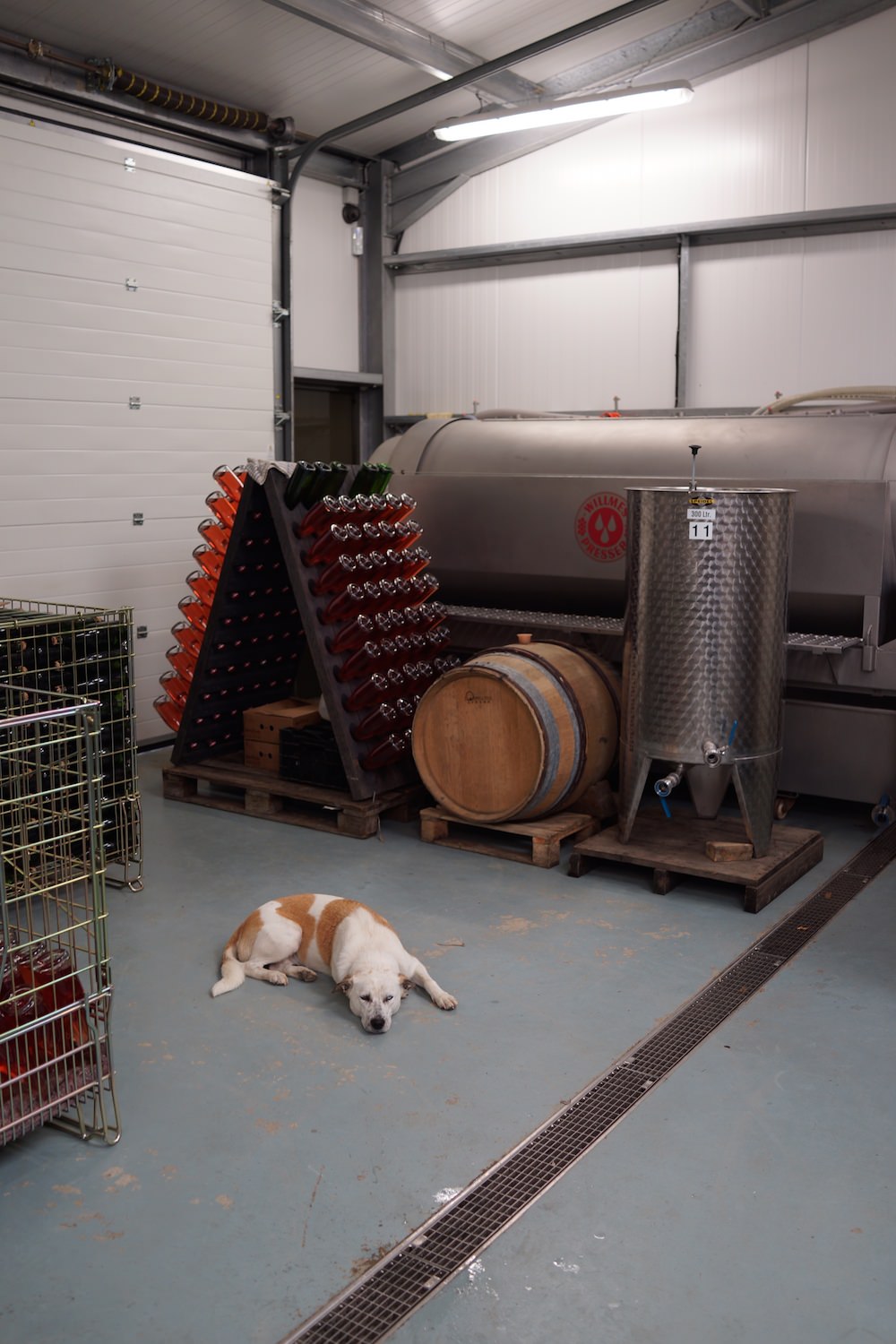 Having thoroughly quizzed Ben on wine making and sampled his wines I rode back to the family farm for a quick bite to eat before riding over to Litlington to meet Jamie the Head Brewer at the Long Man Brewery. 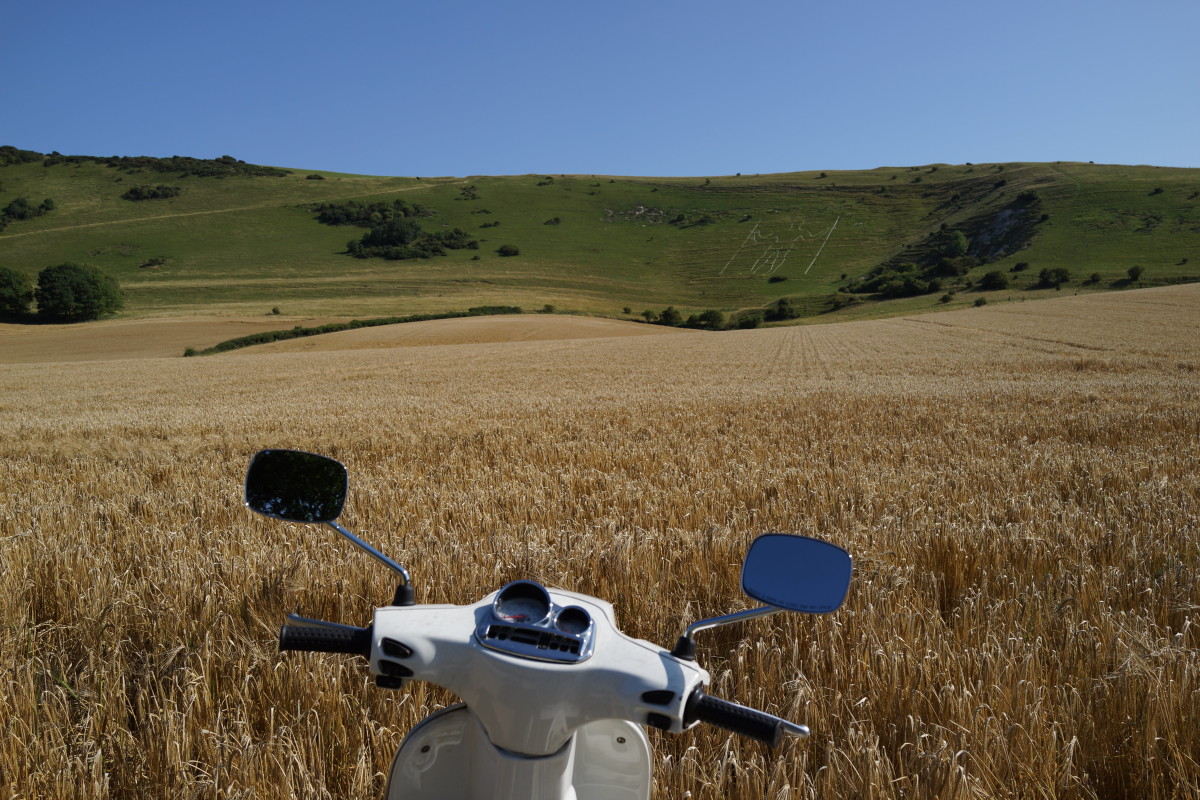 A field of Barley, the famous Long man of Wilmington himself and Veronica too… 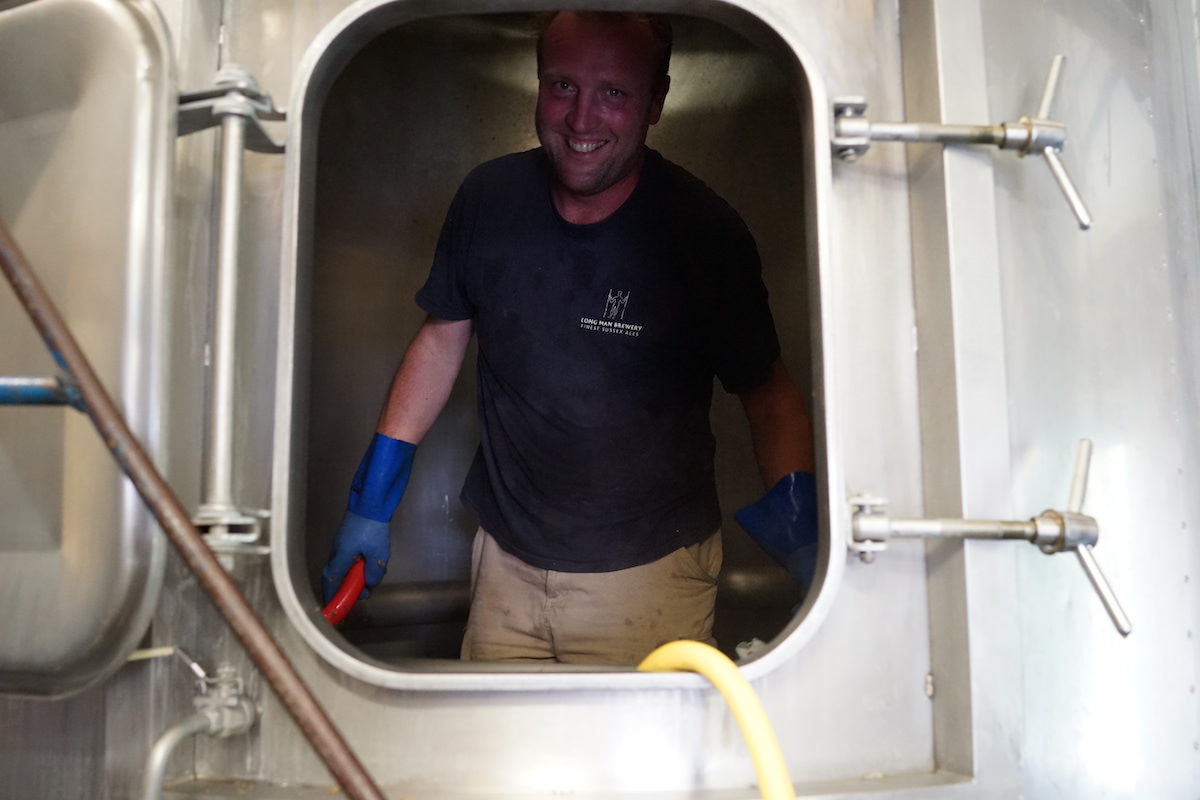 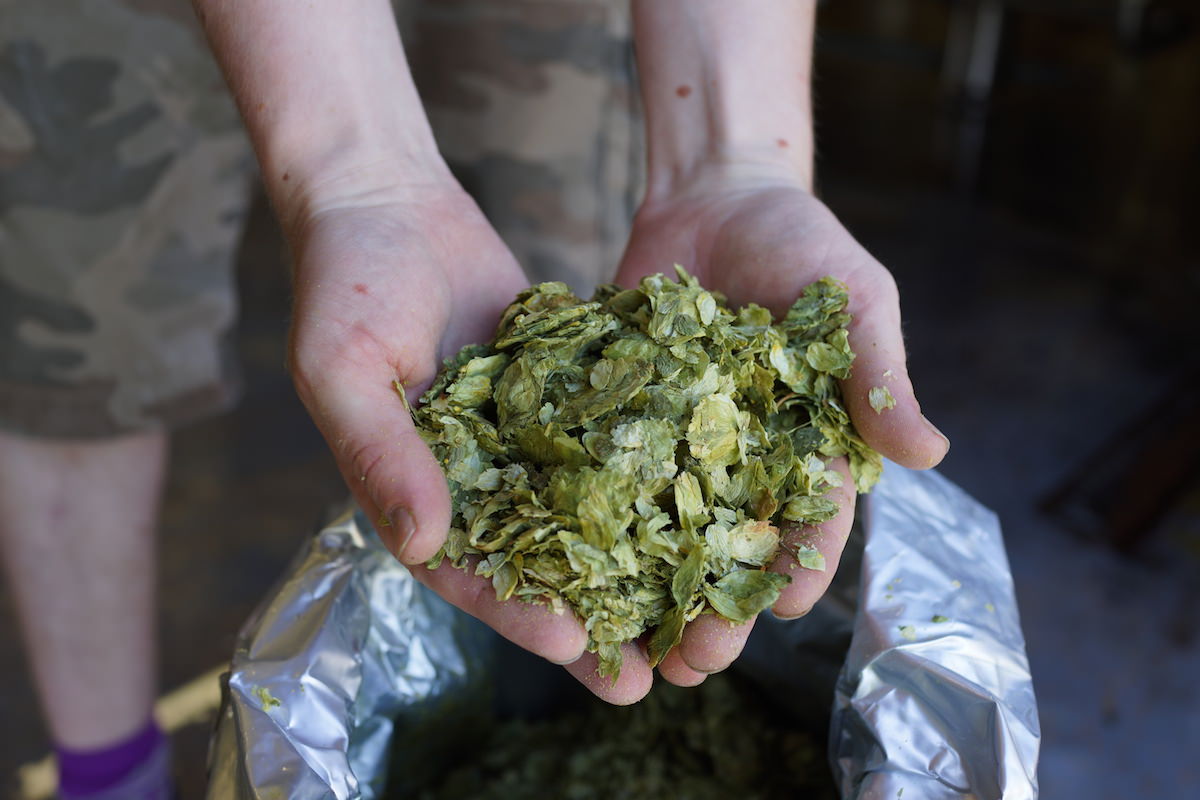 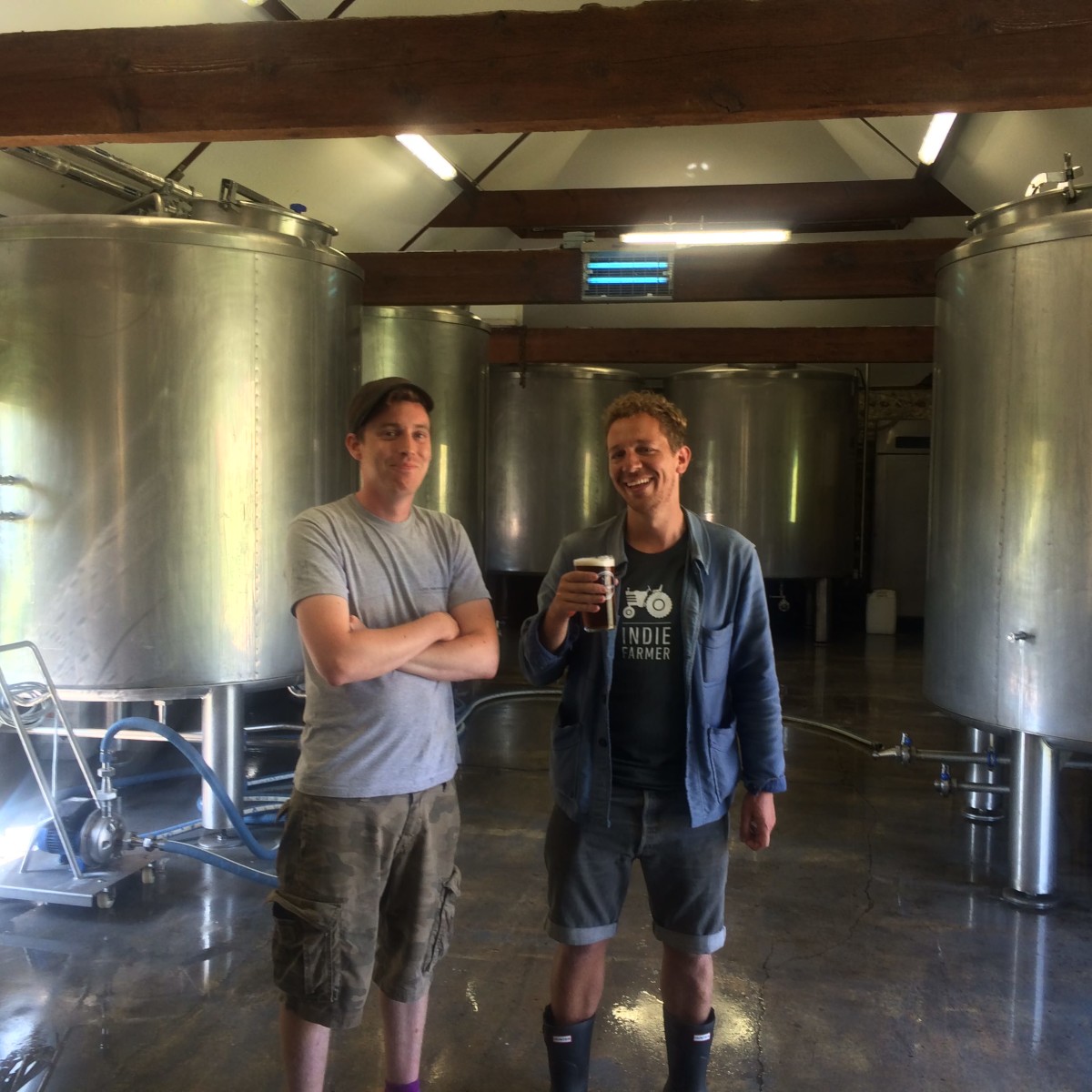 I should mention that all the Malt used at the Brewery is grown on the farm . Unfortunately I couldn’t meet the farmer as he happened to be away that day but I did manage to visit my dad who happened to be combining some Barley on the South Downs in a neighbouring village of Folkington. 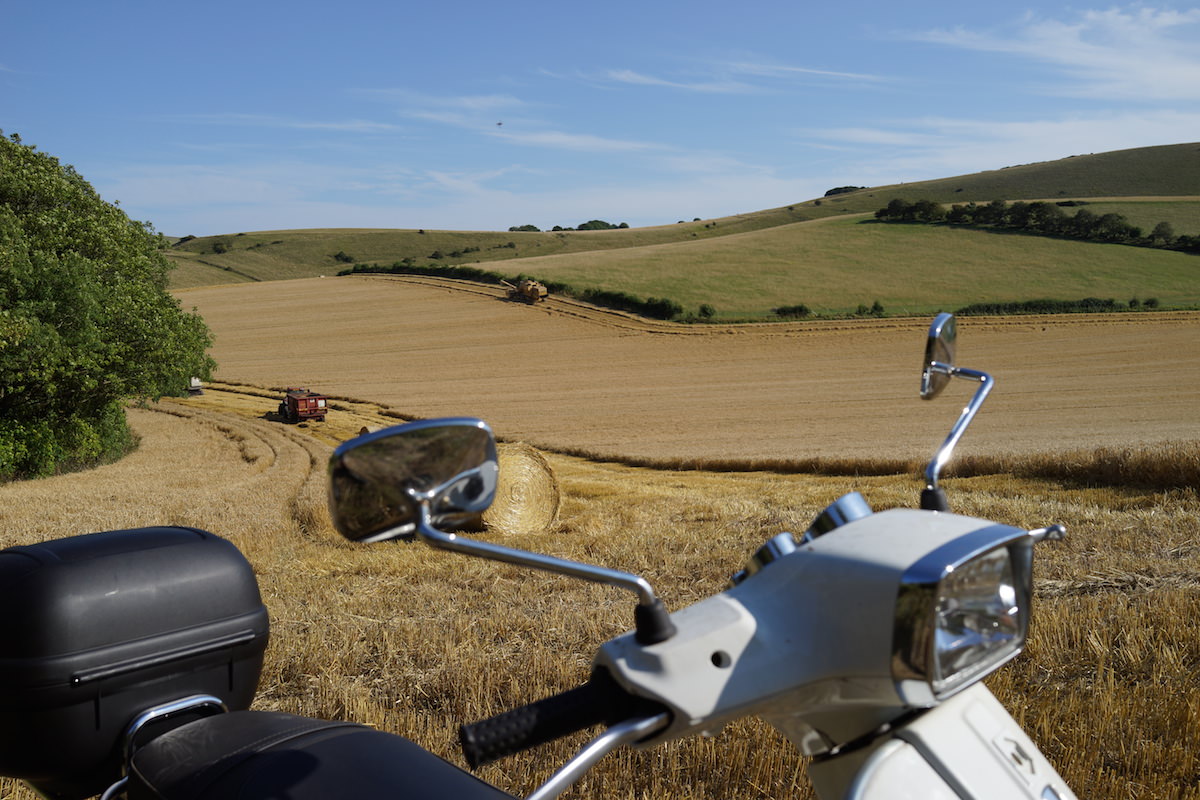 Scootering through the Sussex countryside you couldn’t help but notice roadside banners advertising the rural pastimes show at the Pestalozzi Village in Sedlescombe, so decided to check out it out first hand on the Saturday. If you’re a fan of vintage tractors, working horses, threshing machines and series one Landrovers then you should check out my picture story from the visit here 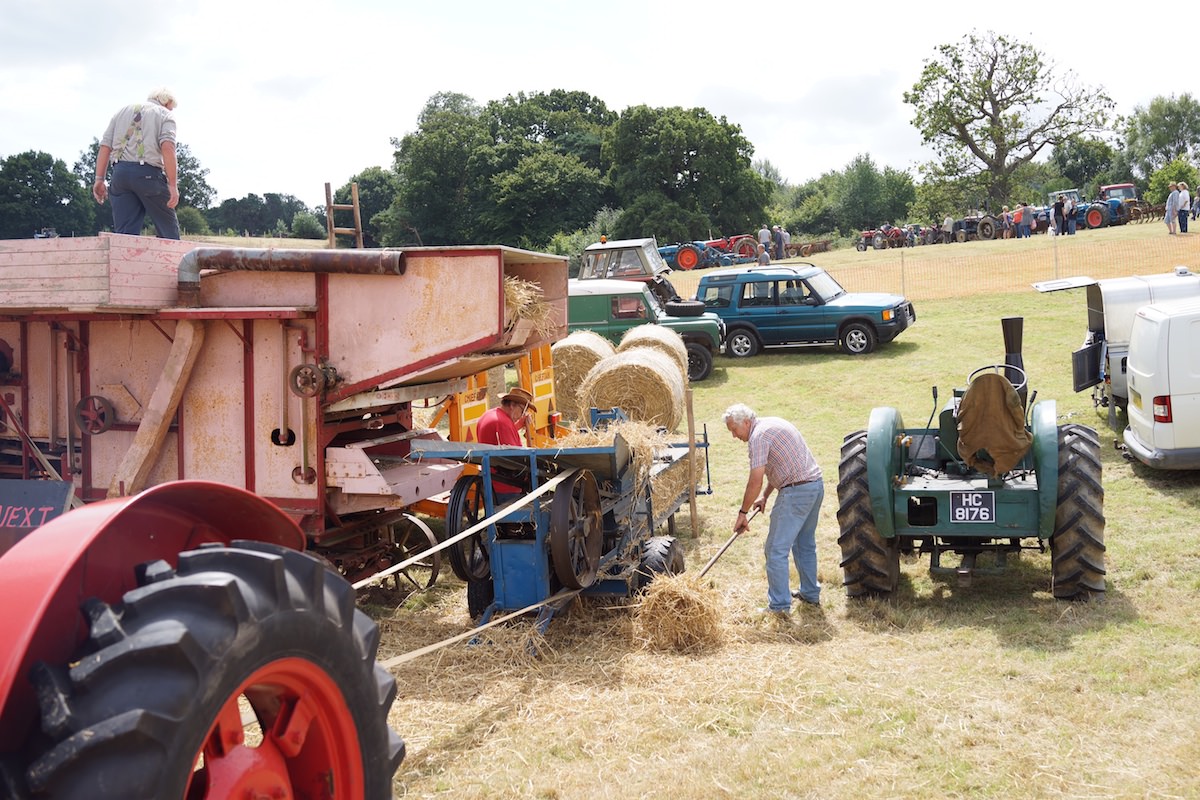 Local Sussex livestock farmer and friend Mickle Harding recommended I check out the Sheep collection in East Dean which has over 50 different breeds of sheep in one place – claimed to be the largest collection of sheep breeds anywhere in the world. 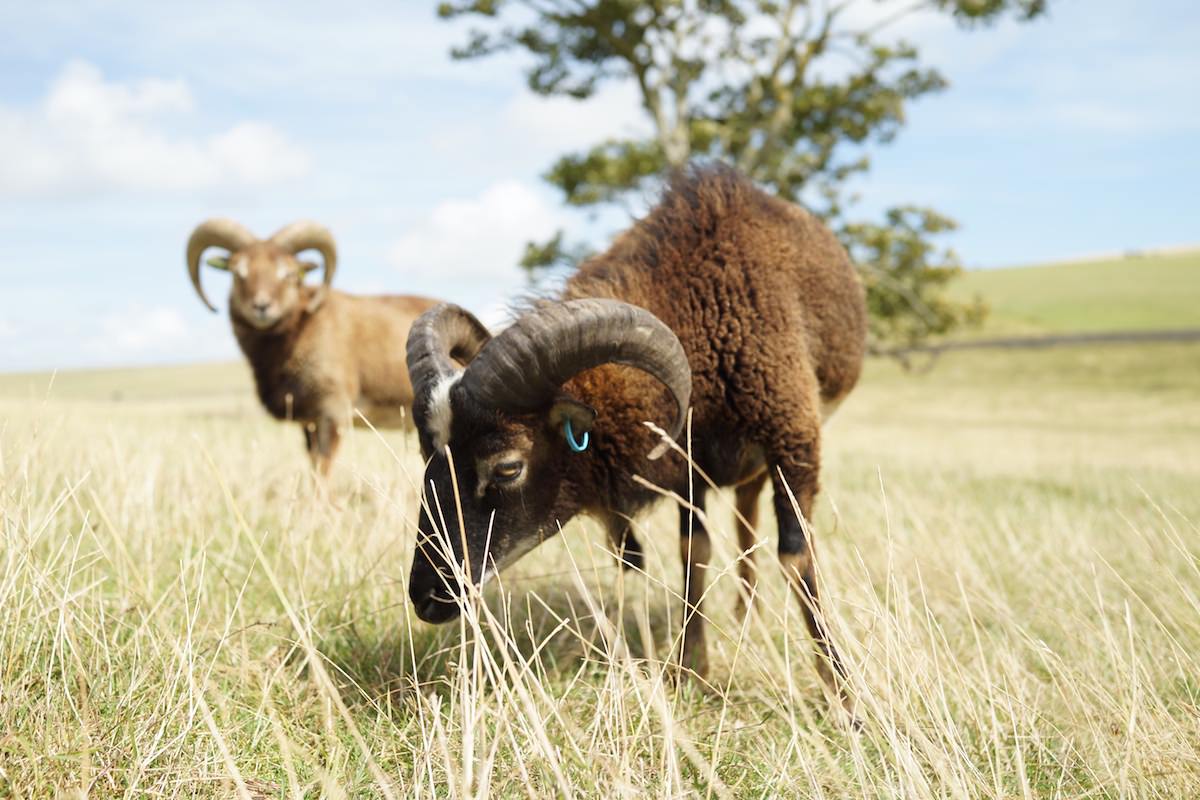 With the weather taking a turn for the worse I ended up spending a couple of days on the family farm helping out with some sheep work, catching up on e-mails and enjoying the luxury of a bed and home cooked food. On the downside it meant I had to miss a few farms and food businesses in West Sussex I wanted to visit and move on to Hampshire.

Arriving to Hyden Farm in Clanfield I met farmer Robert who showed me around his 300 acre mixed livestock farm. Robert who had a recently had a knee operation drove me around the farm showing me his herd of Long Horn cows and South and Hampshire Down Sheep. In addition he rears poultry including Geese, Chickens and Norfolk Black Turkeys. 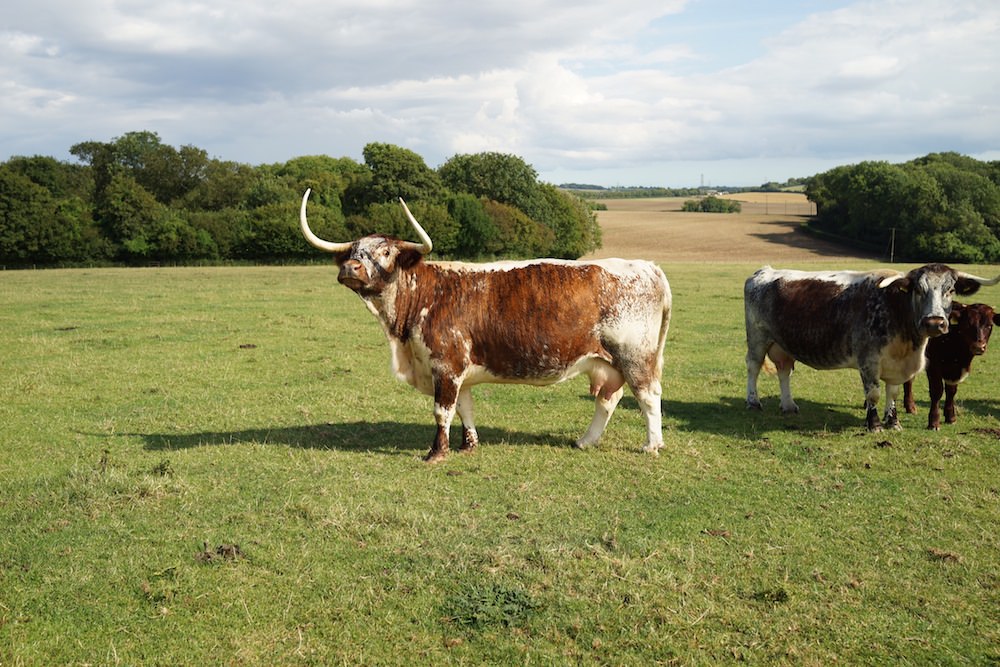 Robert and his Short Horn Bull 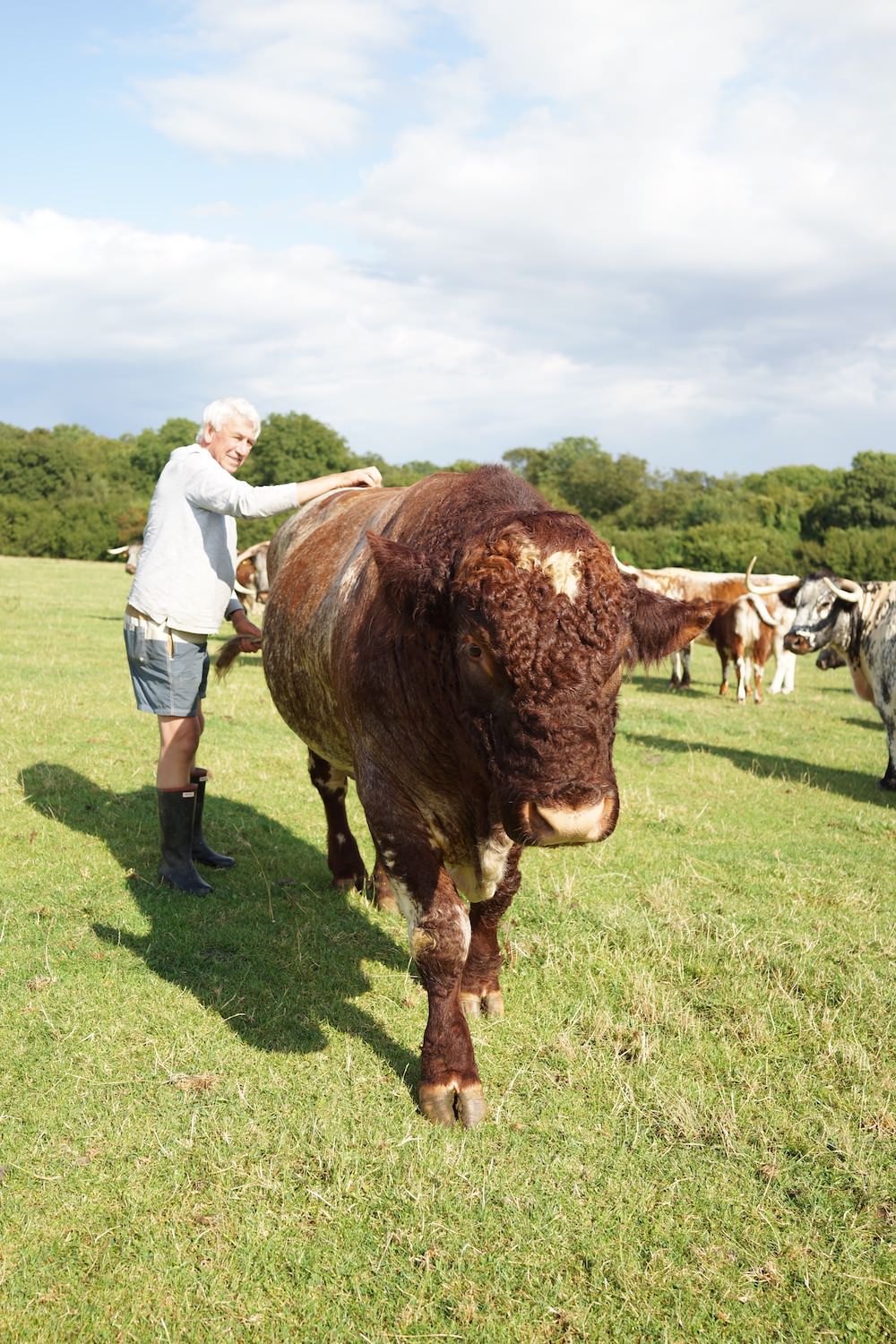 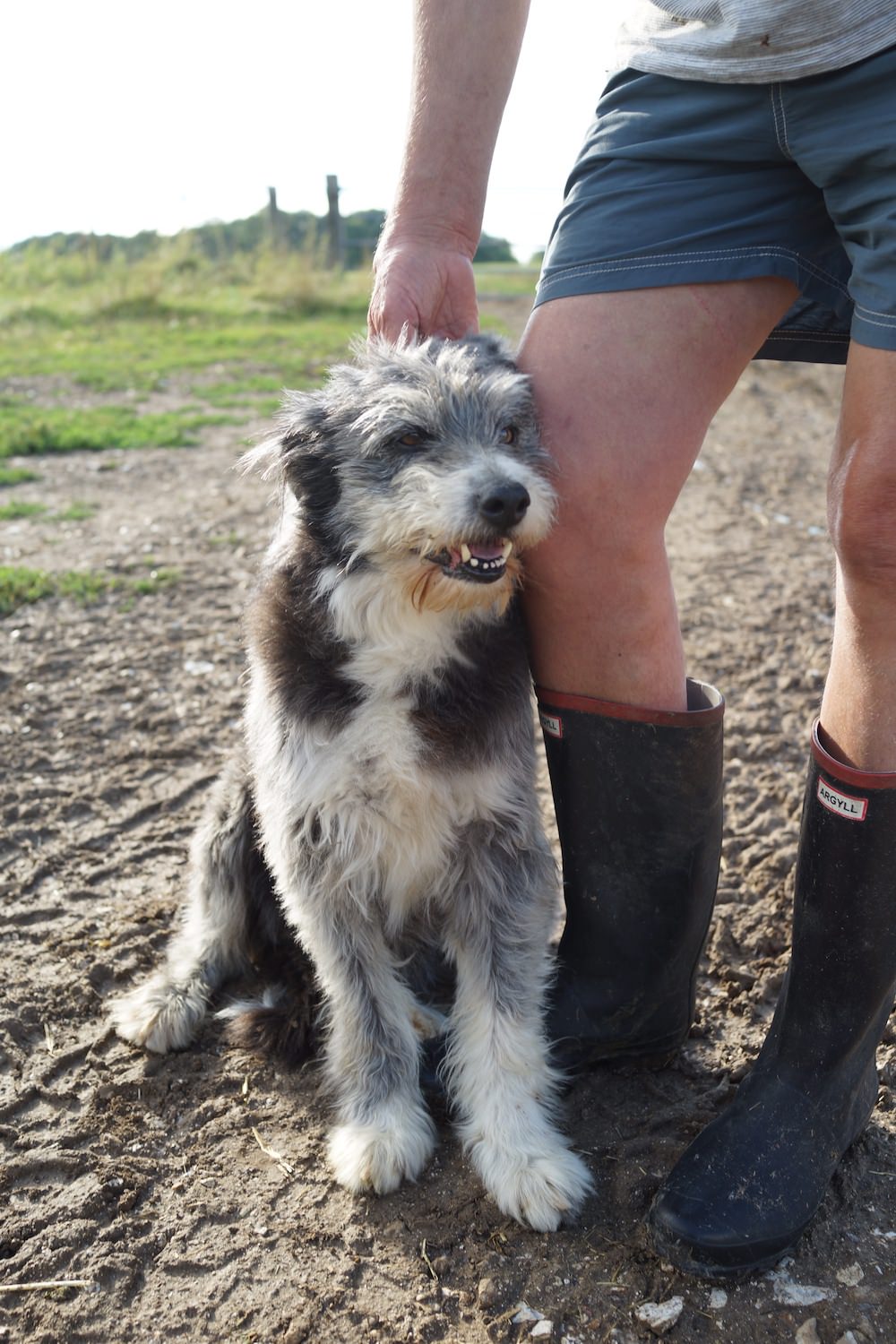 I camped next door to his herd of Long Horns and got to share the field with a couple of calves who took more than a passing interest in my tent! 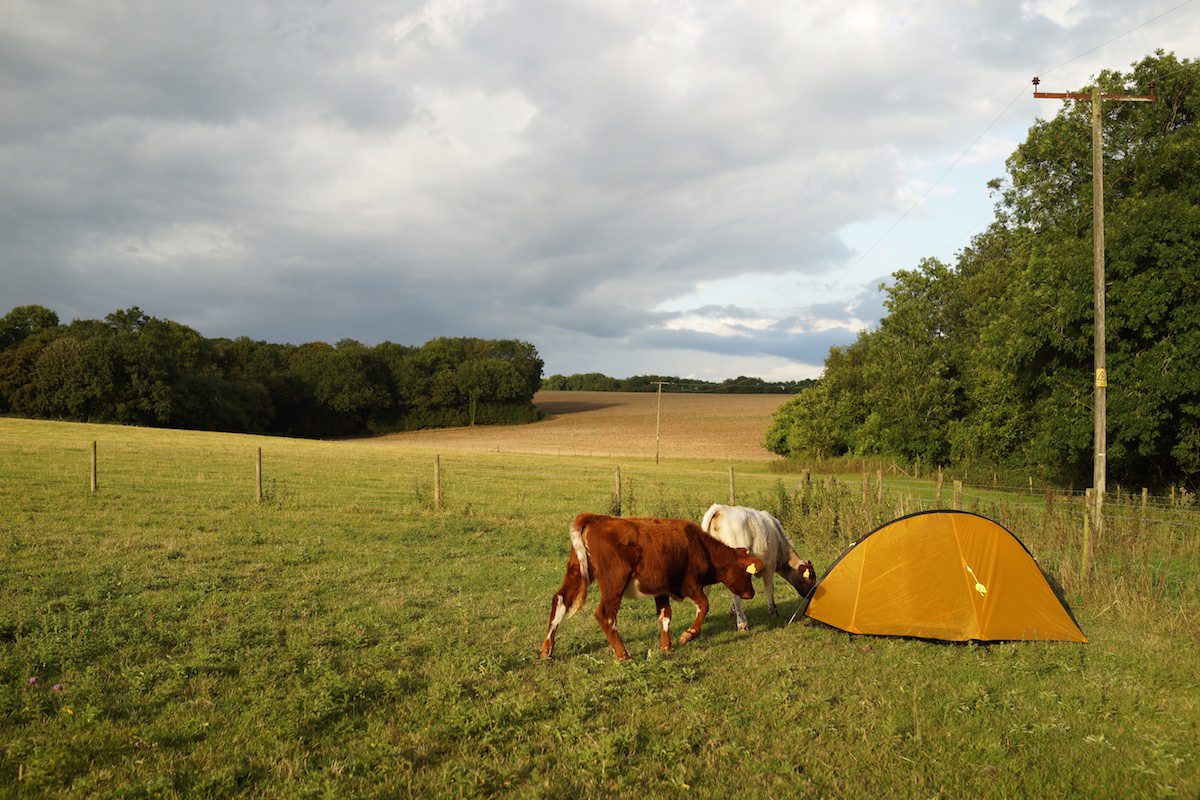 As luck would have it they didn’t trample my tent in the middle of the night and greeted me in the morning! 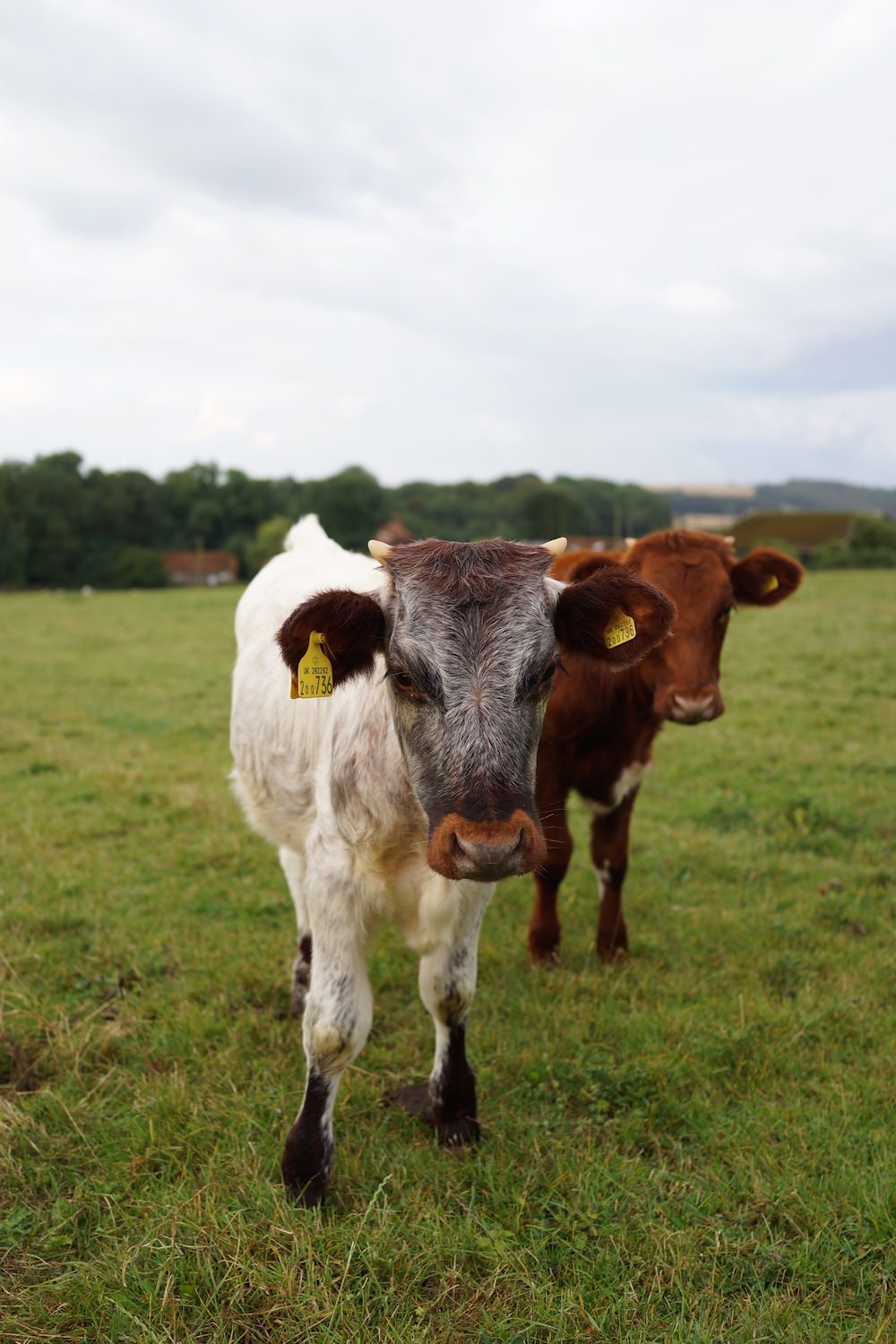 An early start and I rode up through Winchester to Broughton where I met Dagan James, who runs the family farm business Broughton Water Buffalo. Dagan decided to move away from the conventional farming methods practiced by his grandfather and introduced 20 Water Buffalo to the farm in 2001. 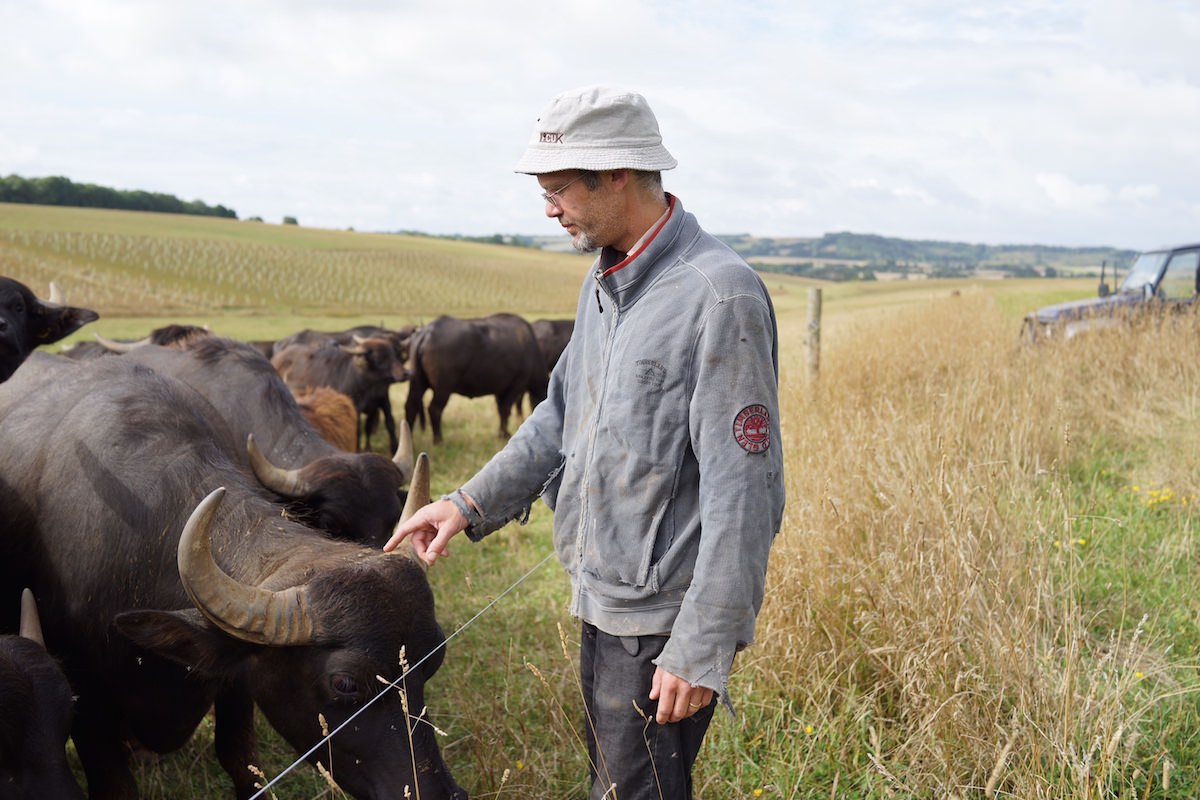 He now has a herd of around 40 Buffalo cows and with a headcount of around 200 Water Buffalo on the farm he uses the animals to mob graze the land as ‘tools’ to manage the soil. They don’t use any chemical fertilisers on the farm preferring to encourage the soil to feed itself with a diverse mix of grass and plant life allied to the Buffalo that fertilise the soil and trample the grass breaking down organic matter. 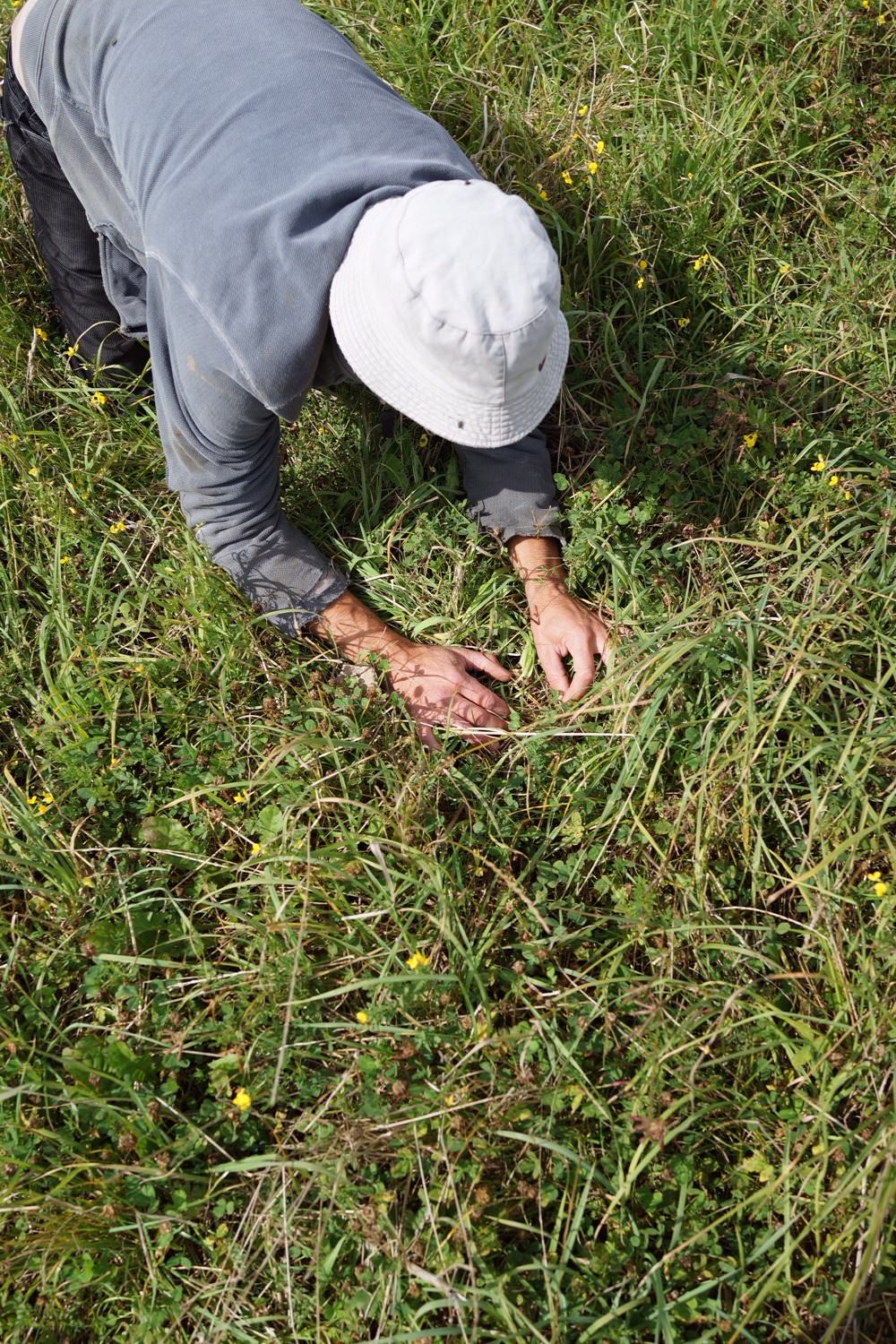 They keep their bulls to around 24 months before they leave the farm to be slaughtered locally at Laverstoke Park where they are then returned to the farm for onsite butchery ready to be sold direct to the public via local farmers markets, an onsite shop and catering events. 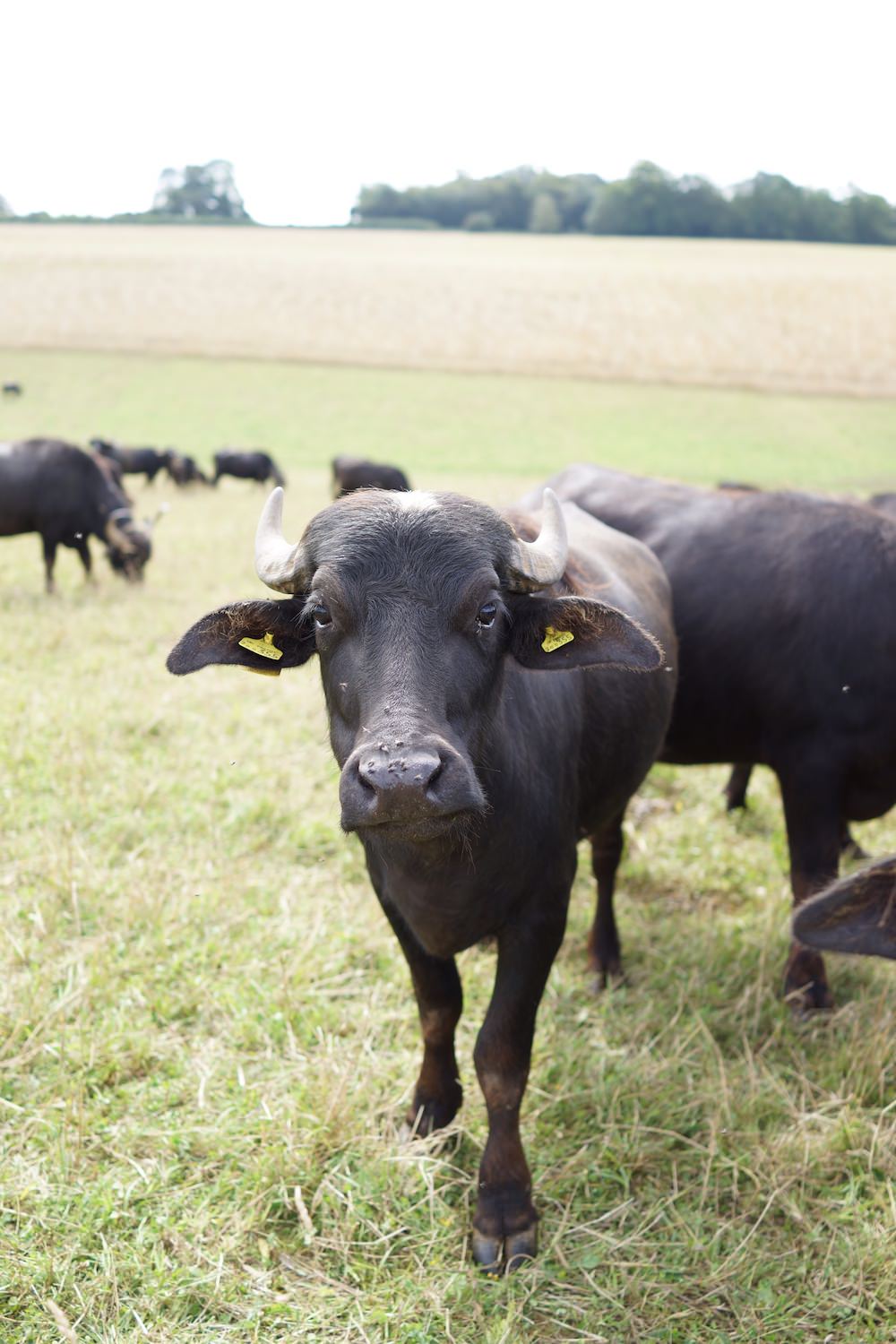 Next stop – Maple Field Farm in the Village of Martin. I’d seen Nick Snelgar speak about Micro Dairying back in January at the Real Oxford Farming Conference where he talked about his smallholding and the opportunity to start a dairy operation supplying direct to the local community. Nick operates a small processing plant where he pasteurises, bottles and supplies 2000 litres of milk a week to the local community. 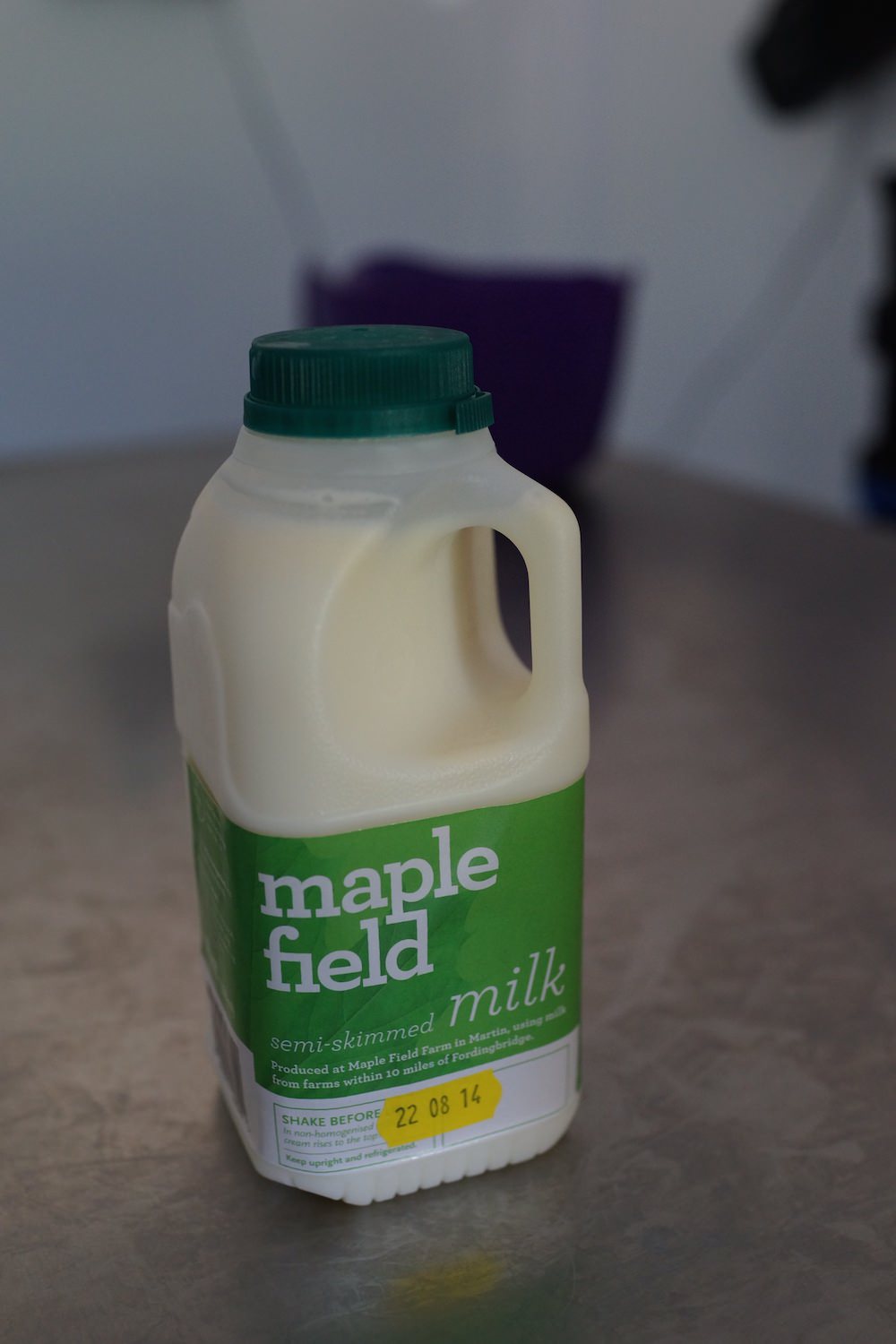 It was fascinating talking to him about trying to encourage new entrants into the dairy industry by turning the current model of dairying on it’s head by bypassing the large processors, processing yourself and supplying direct to the local community. I was really inspired by his operation and can’t wait to see his mobile milking bale in use too which will make his operation even more profitable with a planned herd of 18 Ayrshire’s which will be milked out in the field. 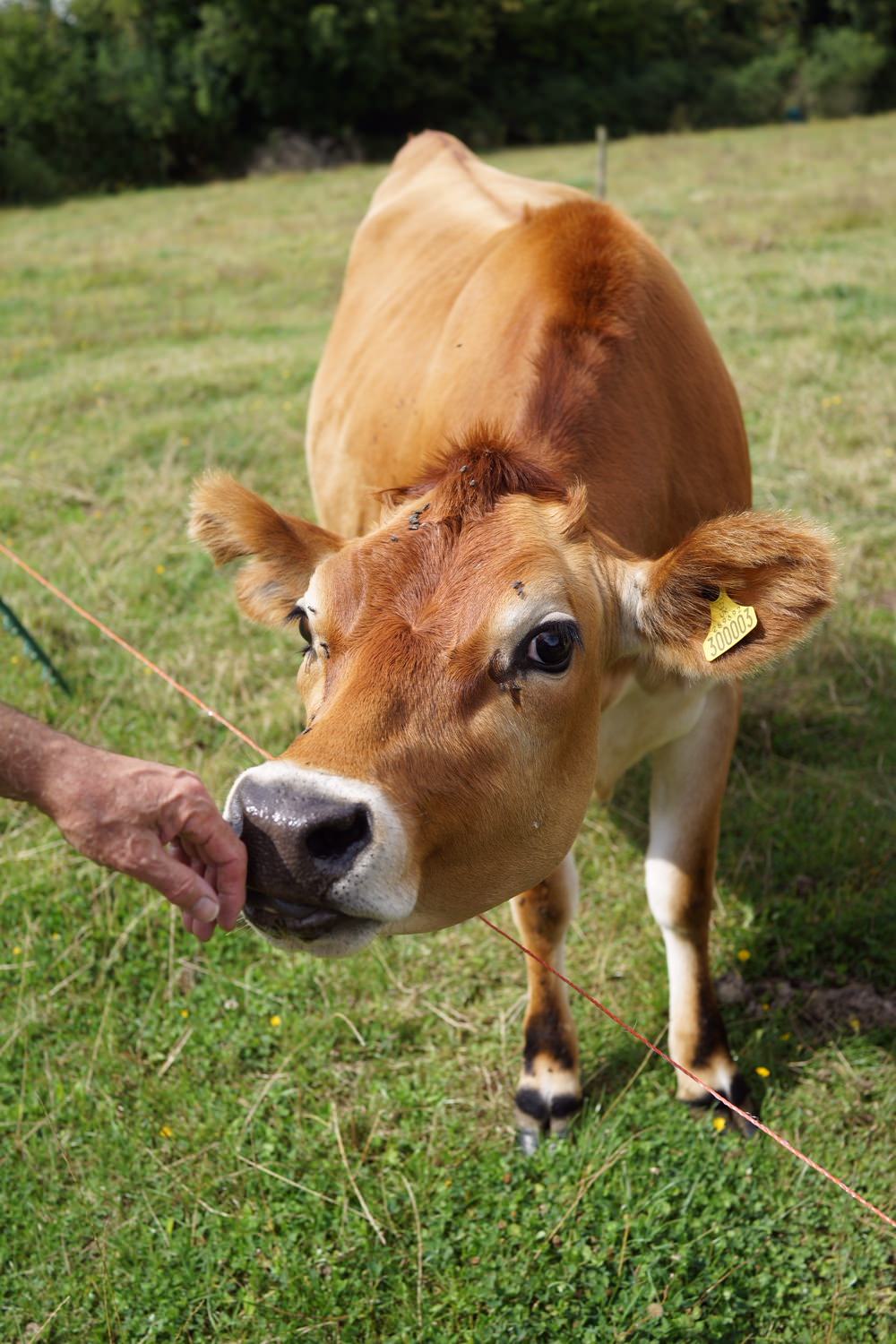 The mobile milking bale which has the capacity to have two cows at a time. 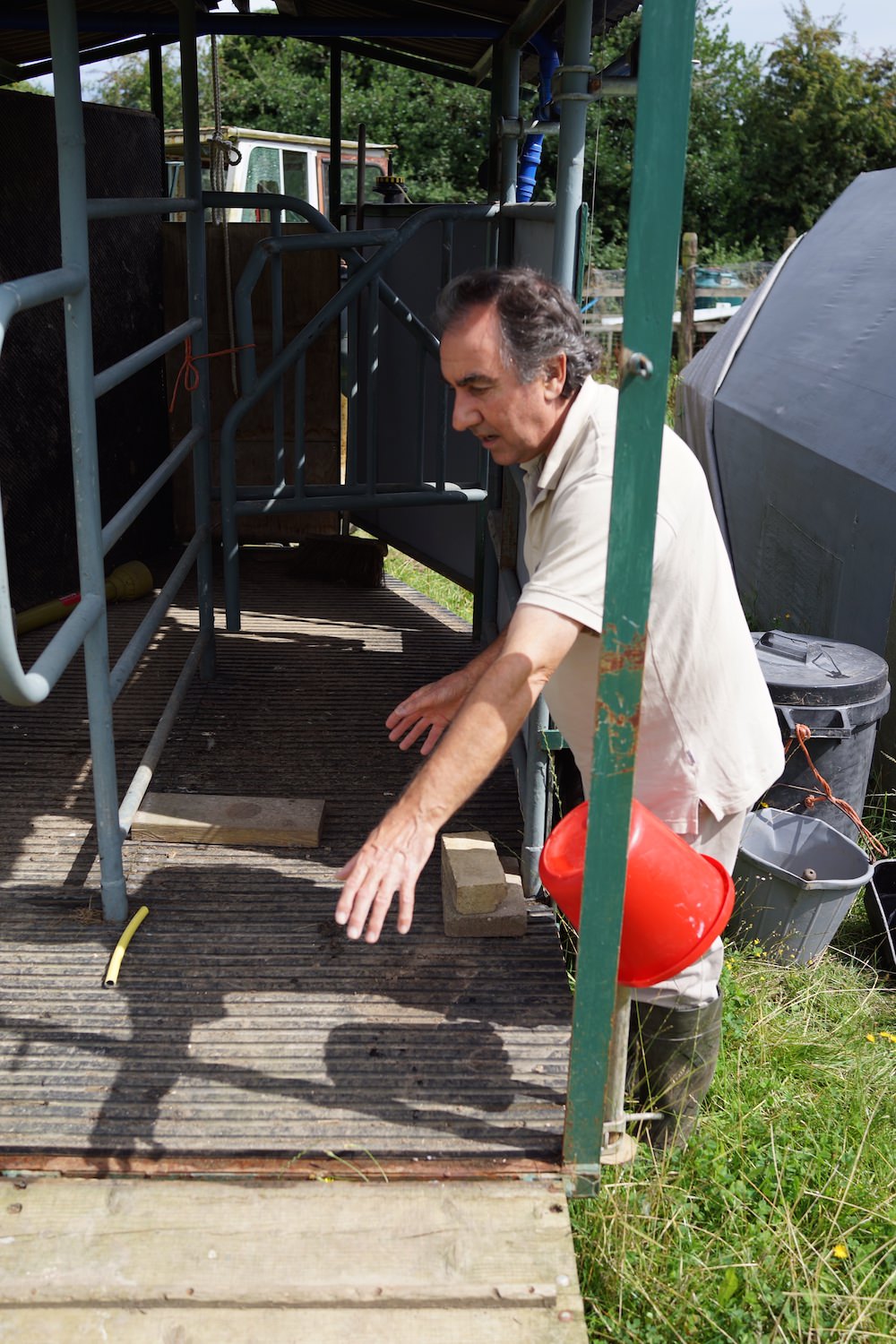 It was interesting talking to Nick around the branding psychology of his packaging – having initially contemplated going for a standout ‘smoothie’ approach he decided to keep it understated in line with much of his supermarket competition. It was great to see Nick’s milk on sale in the local petrol station and also noted  the sign saying that the milk was produced within a 20 mile radius. 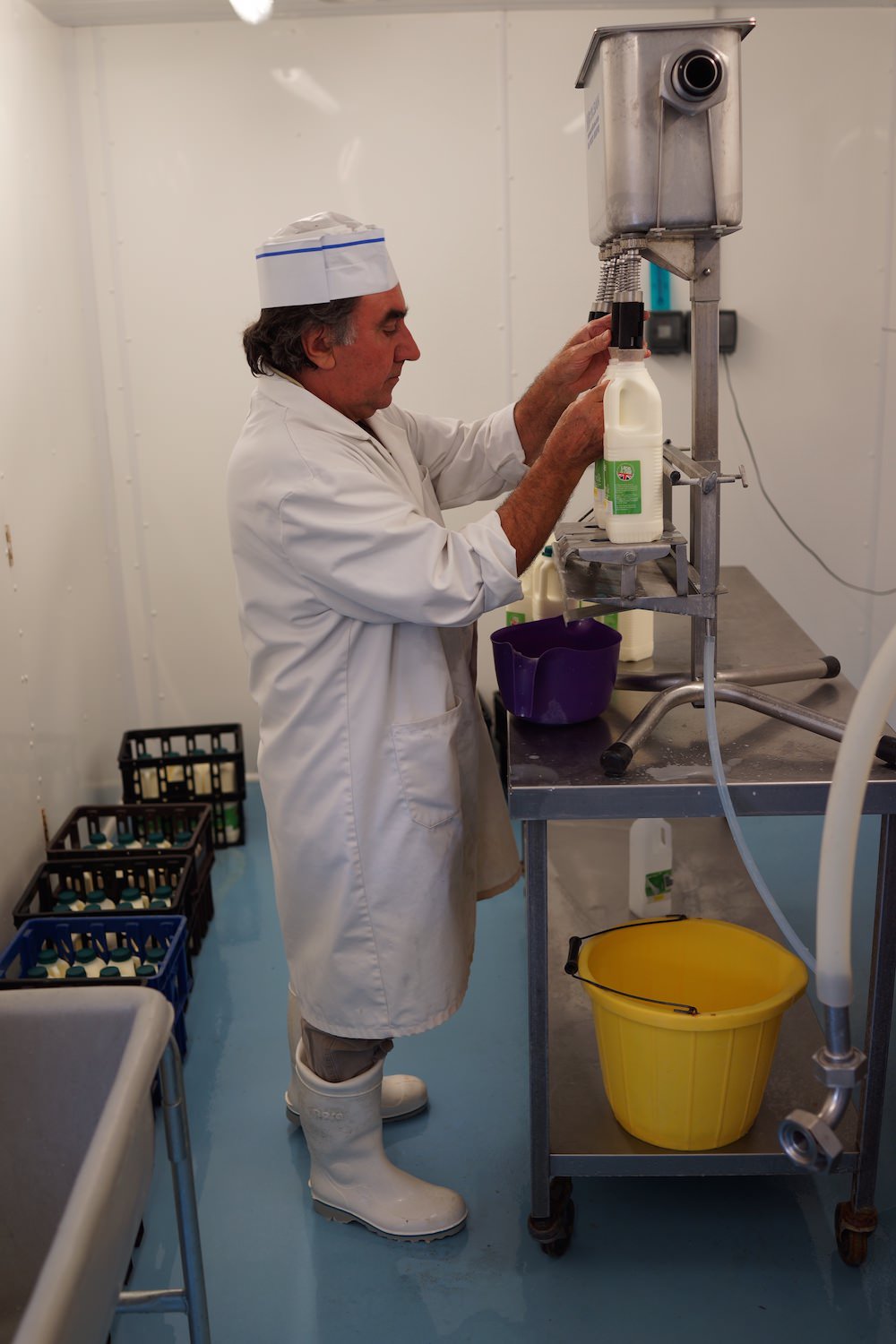 Less than a week to go on my crowd funding campaign!!!

With only 6 days left of my indie farm road trip crowd funding campaign remaining I really need your help to get me as close to my target of £5,000.00 as possible. Having visited and interviewed lots of inspirational independent farmers and small producers over the last 2 and half weeks my resolve to build the indie farmer community is at an all time high. That being said my finances are at an all time low and without your support I may well have to curtail my trip short of my planned 6 weeks – I really want to make this trip a huge success and provide vital coverage to indie farmers and small producers as far north as Yorkshire but need your help to make this happen.

You can support my trip by pledging via my indiegogo crowd funding page HERE or spreading the word about the website and campaign.