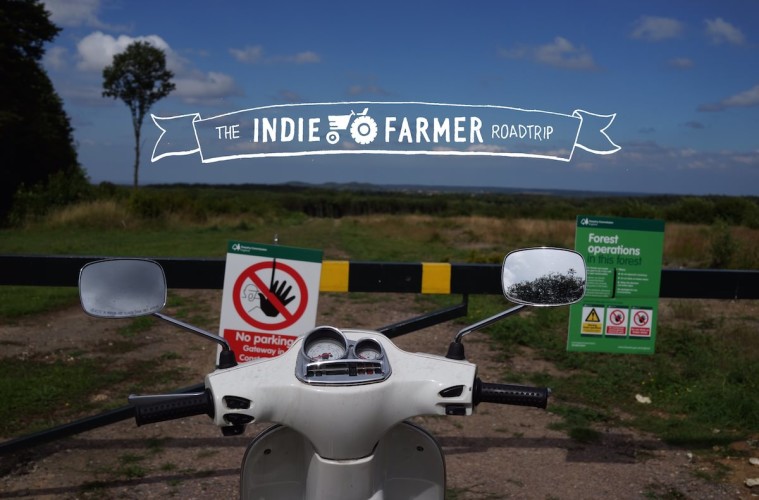 Departing from London last Thursday 31st of July I set off from my house in Hackney on a well laden down Veronica to Graveney in Kent.

Having discovered the website Produced in Kent during my road trip research I came across Jacksveg, a startup smallholding and veg box business run by 27 year old Jack Boggia.

Based on a 2 acre site in Graveney, Jack left his managerial job a couple of years ago after finding his passion for small scale farming, initially running a local box scheme on the side with vegetables and eggs from a small allotment. He now farms a 2 acre smallholding of vegetables, fruit and chickens and has learnt pretty much everything he knows from a collection of micro farming books and regular advice from a local farmer.

He supplies his weekly bags of fresh veg, fruit, edible flowers and eggs to customers in the local community (within a 15 mile radius) and whilst currently experiencing a few issues with wire worm and leatherjacket, which has hampered the production of his own produce, he is steadfast in his motto ‘better not bigger’ and plans to build his business up gradually over time and do farmers markets in London.

Jack introduced me to a neighbouring fruit farmer Alister who owns a 35 acre fruit and veg farm as well as running an onsite farm shop. When I met Alister he was plum picking with a couple of helpers and a pack of friendly terriers.

Meet Fluff one of dogs.

Andy taking a break from picking and one rather large plum..

Jack and Alister amidst the runner beans..

I rode some 54 miles to Commonwork Organic Farm near Tonbridge to interview Sanjay and Sarah who run Ahimsa Slaughter Free Milk and got to meet their 9 dairy cows. Sanjay and Sarah gave me a quick tour around the farm and I also met Robin Budd, Commonwork’s Dairy Manager who was processing some of the Ahimsa milk.

Meet Bluebell, one of their 9 dairy cows.

Wye Farmers Market had been recommended to me and since it happened to be the first Saturday of the month (the market is held every 1st and 3rd Saturday of the month), I scooted down from Graveney via some rather scenic country back lanes to meet a few of the small producers in the picturesque medieval Kentish town.

Veronica looking remarkably clean in the bright sunshine in front of the bridge as you enter Wye.

I got chatting to Botterrells, VJ Game, Ripple Farm Organics (above) and Susan Gollins, a partially sighted herb farmer who runs Invicta Herbs – who I later interviewed on her smallholding in Challock later in the afternoon.

Stopping off to admire the view along the way..

Originally having planned a quiet day to catch up on content, instead elected to visit Brogdale Farm to see the national fruit collection which has over 4000 varieties of apple tree..

I’d arranged to visit Chegworth Valley Farm near Maidstone, best known for their apple and pear fruit juices. The family owned food business is run from their 100 acre farm and employs around 70 people with the main shop in Borough Market and one in Notting Hill along with around 10 market stalls across London as well as a operating a box scheme across Kent and London.

Jack, being a small-scale box scheme grower was keen to learn more about a larger scale business so we drove down in his van. As we neared the farm driving down a tiny country lane we encountered a rather rustic looking sign and a mobile farm shop complete with tractor parked in a field.

We parked up in the farmyard and knocked on the small farm office next to the house meeting Vikki, Chegworth’s Marketing Manager and our guide for the morning. Vikki showed us the tunnels where the majority of the fruit and veg is grown and we met some of the pickers too most of whom live onsite in a small community of caravans.

We tried some of the tomatoes..

After inspecting the tunnels we checked our the apple trees in the adjacent field – these ones apparently not far off being ready to pick..

One of Chegworth’s pickers pulling spring onions from the ground ready for deliver to customers or the farm shops in London the same or the next day.

It was fascinating seeing the fruit press in action – with the pears being sorted by hand before going into the press machine for juicing.

With the waste product being taken to local beef farmers for cattle feed.

We then visited the onsite pasteurisation, bottling facility and cold storage building, where the fruit and veg boxes are prepared ready to go direct to customer via Chegworth delivery vehicles.

Thanking Vikki for a fun and comprehensive tour of the farm we headed 2 mins down the road to the Pepper Box Inn for a swift drink with neighbouring farmer Charles Tassell, one of the founders of AgrichatUK, The Kent Food App and Farming in the Park.

I’d previously met Charles for the first time at the first Farmers on Film festival up in Nantwich on the 29th of July, as one of the speakers about Indie Farmer and my plans to do a 6 week road trip.

It was veg box delivery day at Jacksveg and I’d offered to help out in the morning picking tomatoes from the tunnel and harvesting spring onions with Jack’s young apprentice Jasper.

We had to visit a wholesaler in Whitstable where Jack bought in some additional veg to make up his boxes and we then headed to Alister’s where we prepared the veg bags ready for delivery.

At which point I said my goodbyes and scooted to Faversham to do a quick tour of the oldest family owned brewery in England, Shepard Neame. Arriving half an hour too late to catch the last tour, Moray Neame kindly offered to give me the whistle stop tour of the main brewery and the pilot brew house where they brew smaller batches of craft beer, more along the lines of what you’d see in a micro brewery.

Thanks to everyone who has supported my indiegogo campaign to date – so far I have raised over £1,500.00 which is fantastic but with 17 days left to run I really need your help to spread the word and donate to help hit my target of £5,000.00. Hitting this target will mean I’ll be able to cover most of the basic costs of this road trip and create the first special edition Indie Farmer Print Journal (see mock up below).

There are some great perks available such as the print journal and a selection of indie farmer hamper boxes full of amazing artisan food and drink, indie farmer t-shirts and totes too. By supporting this campaign you will bring vital coverage to independent farmers and help build the indie farmer community.