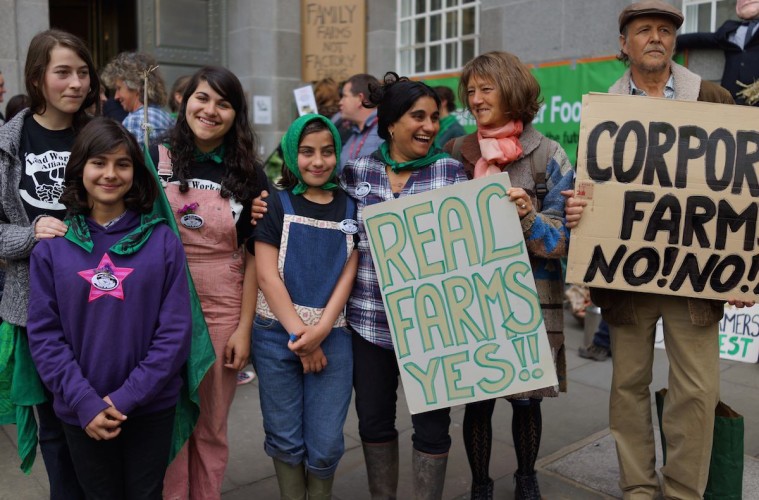 We meet the group of small farmers protesting outside Defra head office, organised by The Land Workers’ Alliance, a newly formed union for smaller-scale farmers. We talk to Jyoti Fernandes, a small farmer from Dorset and member of the union to find out more about the campaign and why she believes more should be done to support smaller farmers..

Read Interview
So what inspired you to set up The Land Workers' Alliance?

Well I’ve been working as a small farmer in the UK for 17 years now, going through all the stages of getting set up with almost no capital, no training in agriculture and very little support network. Now we’ve got a successful small farm with my family. But I realise that it’s actually quite a struggle doing it in the context of UK food policy. It’s actually extremely difficult. You have to have a lot of tenacity, and you need enough tenacity to maintain yourself as a farmer anyway, much less in such an unhelpful political context as what’s going on in the UK. As we set up our farm I met people from all across the country, from all over the place. We’ve had so many volunteers through our farm, I get calls pretty much every day from aspiring people who want to work the land and have an occupation in connection with the environment, and realise that there are a lot of people out there who want to do this. The way it’s set up on a wider political level, it is extremely difficult for people to do that. I thought we needed to get together and say something about that, and start to do something to change the political context that we’re operating in. Also to build a sense of solidarity amongst ourselves, you know. To become a movement really, to try and change food.

In light of the climate change debate and the evidence that industrial agriculture is having a detrimental effect on the environment, do you think a return to smaller scale farming would ameliorate the situation?

I think it would help with the situation, I mean I think there’s a lot to be done if we’re going to turn the tide of climate change! I think for one thing for our future food security, small scale farms – because there’s a diversity of things going on – are more resilient in the face of climate change. If something doesn’t work one year, you still have something to fall back on. It’s not like you’re putting all your eggs in one basket. The weather seems to be changing all over the place, and nobody can really predict where it’s going. It means we can still have something to depend on if we still have local farms in place. Also if we start doing more grass based farming, then we can start using grass as a carbon sink and start bringing down our carbon emissions. You have more of a focus on fruit and vegetables in people’s diets if they’re getting things from small scale farms, so you don’t have as much grain factory farming going on. Those things help, they all help with mitigating climate change.

Does large scale farming actually have the ability to feed more people, as promised by corporations?

Large scale farming is a tricky one. Because it’s big machines and big outputs all in one place, it sort of spreads this illusion that it’s producing more food. But when you look at the reality of the situation, at what is being produced on large scale industrial farms, often it’s wasted through maldistribution and inefficient systems for delivering it and getting it to people. A lot of it is put into animal feed, which is an inefficient way of producing food. Quite a lot of it is just used as biomass for biofuels, and goes towards the luxury market. And quite a lot of it becomes processed foods, which are unhealthy for the population. So they’re not really producing the food that people need to provide for their daily lives, in the way that small farms can. Also, small farms have been proven to be more productive per hectare. We can provide more food. It’s just that people think small, and they don’t think more productive.

There has been evidence overseas of small scale farmers having intimidation tactics and even aggression used against them by larger corporations. Is this prevalent in the UK?

I think we live in a society where people can try and speak up – whether or not we’re listened to always is another story! So we’re pretty lucky like that, we’re not going to have people coming at us with guns and intimidating us in that way. But there has been a certain level of intimidation. For example last year I spoke out against the conference for the Genetically Modified Crop trial, and I was on television speaking out against that trial. The next day somebody put an injunction on me, they set a hundred page injunction on me saying that they could take my property if anybody damaged any of the crops. It was simply for “promoting civil disobedience”. And so, just because I spoke out against it – I hadn’t actually done anything, not done any criminal damage in any way – they said I couldn’t speak about genetically modified crops at all, or it would be promoting criminal damage. So I think that’s some level of intimidation…

What does Defra stand to gain in hindering small scale farming?

I think it’s not so much that they hinder it, it’s just that it’s completely marginalised because everything – the payments, all the research and development in the market – is going to the larger farms, the retail farms and to the agri-tech industry. They want to try and push down smaller independent farms, because they’re more autonomous from that system that makes money, basically. And the more money that’s in it, they see it as more economic growth, and it probably lines their pockets as well.

England hasn’t always been under this stranglehold of large scale agriculture. When did it become the norm?

I think in the 50s and 60s, and then on through Thatcher, there was this idea that progress and the modern economy needed to be based around things becoming bigger and more corporate controls, and that was “development” really. And so there was that whole idea that you needed to consolidate smallholdings because they were backwards and inefficient and something of the past, and move onto the future where everything’s a bit more global, and things are controlled by corporations. Thatcher dismantled the milk marketing board, which was the beginning of the end of protecting farmers.

Exactly, and that process is still in place today, I mean dairy farms are just dying. I don’t know what the rate is, the statistics are there. They’re completely going out of business because they’re being paid below the cost of production, and there’s no market regulation in place to ensure that they get a fair price on their product, to make sure that they can provide a viable livelihood. They can get payments without it being linked to any production whatsoever. So the only people who are really farming are doing it because it’s a family farm, and they don’t really want to give it up, or just because they believe in it. They’re really working pure belief and love, these dairy farmers. There’s nothing, financially, that promotes anybody doing it. It’s an incredibly sad thing. And that’s the whole process that’s in place with all of farming. And I think it’s one that people think might be inevitable, but it isn’t inevitable in any way. The government policy in no way supports making farming viable and saying that we need to have farming in place. They just think for our food security we can import everything.

What areas of farming do your members represent, and what areas would you like to see being more vocal?

Well, our organisation is small and medium scale farmers and family farmers, and that includes community supported agriculture, and those alternative models of more community-linked farming. So there are a lot of horticultural units in our representation, some small scale dairy, small scale people growing wheat, people in meat production – because that’s something that’s suitable for small scale mixed farms. Egg production, lots of processed products like jams, apple juice, cider. Different kind of value added things like face creams and that kind of thing. And then we also have people involved in the craft industry. So its all kind of people who just want some kind of quality industry really, or small scale local farms providing good quality products that they produce themselves.

There’s nobody doing sugar because British sugar owns 100% of the monopoly!

How do you propose Defra make their support between large and small scale farming more equitable?

We want to see a cap put on the single payments, the Pillar One payments that come from Europe, at £150,000. We don’t want any farming unit or landowner to receive more than £150,000. Which would save about £200,000,000. We’d like to see that money being diverted to Pillar Two, which is the rural development money that is available. And we’d like the rural development money to be available for core production, so people can get set up, to get all the infrastructure in place they need to get small scale farms off the ground. Also some ongoing support for farms that are employing more people, with high levels of productivity producing affordable food –not just niche products – and higher standards of animal welfare and environmental management.

And for aspiring farmers, what is the best way to get into farming if you’re not born into a family farm, is it a no-go? Or are there opportunities?

There are opportunities out there that are opening up. You have to be quite creative, and sometimes have quite thick skin to barge your way through all the barriers that get put in place. But there are people who do it, who believe that much in going into small scale farming that they do it. There are some examples out there of successful people who have moved into agriculture and are making a go of it. But what you have to do is try and get finance from maybe ethical banks, crowd funding, going into community supported agriculture or work for a trust… find a creative way to raise the finance for the incredibly high prices of land. And you can’t always expect the price of the land to reflect the value that you’ll get from your farming. You kind of have to go into it with a little bit of belief behind you.

Get a good business plan together, develop some products, try and shorten your chains of where you supply to, so you are supplying as locally as possible and getting as much of the value of your product back as possible. Quite a lot of farms do a lot of value added processing. So they’ll be making the final product, whether that be making apple juice or jam or cider, or sausages, or doing catering or running their own farm shops or whatever it is.